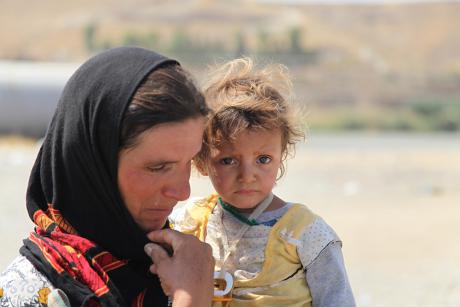 Hundreds of thousands of refugees will be at risk for survival this winter. [UNICEF]

Germany is accusing the EU of putting millions of refugee lives on the line in the Middle East, saying Brussels should allocate a “special one billion” to prevent mass mortalities this winter. EURACTIV Germany reports.

In light of the refugee crisis in Syria, and in neighbouring countries, Germany is calling for greater commitments from its fellow EU member states.

“We are witnessing a disaster of the century. Many deaths will occur in the coming winter if we do not make a clear combined effort,” said German Development Minister Gerd Müller. He spoke on Tuesday (28 October) at the opening of a conference on refugees with representatives from more than 35 states.

Seven million children and minors are displaced due to the Syrian civil war and terror caused by the Islamic State (IS). Hundreds of thousands are forced to sleep in mud or are housed in precarious accommodations.

“I am missing the EU’s humanitarian flag,” said Müller. Germany has already done its homework and serves as a role model, he pointed out.

“If the remaining 27 member states would involve themselves according to their size and capability, like Germany, then we could secure the survival of families and children and offer them long-term prospects,” the German development minister said.

Germany is already carrying enough of the burden, echoed Germany’s Foreign Minister Frank-Walter Steinmeier on Tuesday (October 28). Since the start of the crisis, he said the German government has invested around €650 million in the region and taken in 70,000 Syrian refugees. And Steinmeier announced an additional 640 million euros to be contributed until 2017.

Müller called on the new European Commission to allocate a special billion euro fund from existing coffers like the European Development Fund (EDF) and funds for humanitarian aid and the neighbourhood.

“I am depending on Commission President Juncker to take the appropriate steps and set the course,” said Müller.

Refugee crisis is “a breeding ground for global terror”

At the Syria conference, Lebanon, Jordan and Turkey made a dramatic appeal to the EU and the West. If the latter do not take over more of the burden soon, the entire region will collapse – a situation that would have a serious effect on Europe.

“We have given everything for the refugees but now we need aid ourselves,” said Lebanese Prime Minister Tammam Salam on Tuesday. “Lebanon has reached the limit of its ability to take in more [refugees].”

Salam called on Europe and the West to accept more refugees than they have so far. The social tensions set in motion by the massive influx of Syrian refugees create an explosive breeding ground for extremism and violence, the Prime Minister said. This not only applies to the region, he added, but to the rest of the world.

Representatives from Jordan, Turkey, Iraq and Egypt painted a similar picture. “The enormous increase in individuals requiring aid has exceeded all of our capacities,” explained Jordan’s Foreign Minister Nasser Judeh.

Many communities that have taken in refugees, were already on the verge of poverty. In addition, the demand for water has risen by 16%, although Judeh said his country already has the fourth-lowest water reserves in the world.

Turkey accused the international community of leaving the affected countries to deal with the financial burden on their own. Within just a few weeks Turkey had taken in more refugees than the entire EU, said the country’s deputy foreign minister Naci Koru, urging a fair division of burden on asylum seekers.

UN Refugee Commissioner Antonio Guterres called on the international community to accept more refugees and increase aid. “We must support Syria’s neighbours in order to prevent a humanitarian disaster,” Guterres warned. This could happen by means of setting up special resettlement measures or more flexible visa regulations.

At the moment, refugees continue to be turned away at the border between Greece and Turkey, Burkhardt said. The closed borders force refugees to take the dangerous path across the central Mediterranean.

“While the foreign and development ministers advocate for measures to assist neighbouring states, the European Union’s internal affairs ministers continue to perfect their partitioning,” said Burkhardt.

The EU needs to conduct a parallel discussion on acceptance of Syrian refugees, the Pro Asyl chief said. Industrialised states have only committed to receiving around 42,000 people – a startling low number compared to the gravity of the situation, Burkhardt commented.

Even Germany could take in more refugees from Syria than it has so far, the asylum expert said. Pro Asyl demands that refugees from Iraq and Syria be given free passage to join their relatives in European countries.