The German South-West Africa leadership during the 1904 uprising. The massacre has been referred to as "the Kaiser's Holocaust". [Wikimedia]

More than a century since the German Empire carried out racial extermination in Namibia and in the wake of its recognition of the Armenian genocide, Germany is being urged to do the same for Namibia. But Berlin’s unwillingness to grant reparations has been criticised. EURACTIV Germany reports.

More than a month ago, the German government voted by a large majority to acknowledge that the massacre of Armenians by Turks during the First World War was genocide. It was a move widely praised by the international community, but did draw the ire of the Turkish government, who branded it as “hypocrisy”.

Two weeks later, the Bundestag’s President, Norbert Lammert (CDU), shone the spotlight on Germany’s colonial past and called for a “similarly unequivocal statement” to be made about the massacre carried out by German soldiers against the Herero and Nama peoples, in what is now Namibia.

A Foreign Ministry spokesperson said, “We seek a common policy statement on the following elements: a common language on the historical events and a German apology and its acceptance by Namibia.”

The call comes more than 100 years after the atrocities were carried out in German South-West Africa by colonial forces, who ruled the area between 1884 and 1919. In 1904, the Herero people rebelled against their colonial masters, which prompted a brutal retaliation from the Germans under the leadership of General Lothar von Trotha (central figure of lead photo), who later wrote that “the nation as such should be annihilated”.

By 1908, even though the uprising was put down almost immediately, 80% of the Herero people had been killed; more than 100,000 individuals lost their lives in just four years.

The German government has avoided taking a clear position on the matter for a long time. Back in 2004, then Development Minister Heidemarie Wieczorek-Zeul actually described the events as genocide during a trip to the country. But this was not adopted as official the government line.

The German Foreign Ministry started using “genocide” last year, but it was only confirmed by an answer to a parliamentary question that this is now Berlin’s official stance. 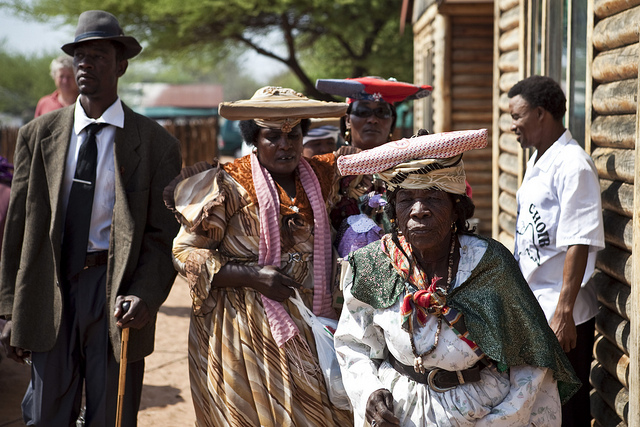 Descendants of the Herero people in traditional colonial-era dress.

A few days ago, the German government’s special representative, Ruprecht Polenz (CDU), went to Namibia where, together with the German ambassador, Christian Schlaga, he made a statement that precluded any notion of providing compensation or reparations to Namibia. Instead, Germany intends to provide the African country with more development aid.

Niema Movassat (Die Linke) told euractiv.de that it was wrong that Berlin “rules out reparations in the negotiations in favour of development aid”. He also added that representatives of the Herero and Nama peoples should be present during the ongoing discussions.

Cem Özdemir (Greens), who was instrumental in bringing the Armenian issue to a vote, said that he would now try to do the same with the Herero case.

Germany is now trying to limit the number of refugees crossing its borders. Ministers have come to blows on the issue. EURACTIV’s partner Tagesspiegel reports.

Germany’s development policy towards Namibia has come in for constant criticism. Since its independence in 1991, Namibia has received about €870 million in aid. However, the funds were not classed as reparations, despite going directly to the Herero and Nama populations.

Namibian MP Kazembo Kazembo said that it is unacceptable that Germany does not differentiate its Namibian aid from development funds it sends to other countries: “Do the Germans really think that we don’t know they send development aid to the rest of the world?”