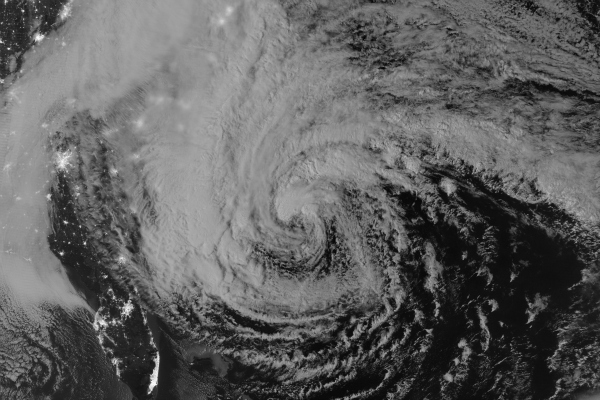 Sea surface temperatures off the American East Coast were nearly 3º warmer than usual this autumn – a near record – and 0.6º of that could be linked to climate change, said Dim Coumou, an earth systems analyst at the Potsdam Institute for Climate Impact Research in Germany.

“This has an influence on the intensity of the storm because if the sea surface temperatures are higher, the overlying atmospheric temperature will also be higher and the air can hold more moisture,” he told EURACTIV.

“This can intensify rainfall, and the storm itself.”

Storm surges are affected by sea level rises and warmer sea temperatures can certainly energise hurricanes, but Coumou added that it would be difficult, if not impossible, to pinpoint which parts of that sea warming were anthopogenic – or caused by human activity – and which parts were not.

But global warming is also expected to increase vertical ‘wind shear’, the difference between wind speed and direction over short atmospheric distances, which could reduce the number and intensity of future storms.

Hurricane Sandy was extraordinary in that it was a record-breaking hybrid, characterised by tropical cyclone and winter storm elements.

Some scientists believe that the fast receding Arctic summer sea ice might also be contributing to extreme weather events but there is as yet no consensus, and more research is needed.

Hedegaard: 'Extreme is the new normal'

Hedegaard’s office declined to comment on any potential link between Hurricane Sandy and climate change. But Kristalina Georgieva, the EU's humanitarian aid and crisis response commissioner, said in a statement: "Hurricane Sandy is yet another example of the increasing intensity and frequency of natural disasters."

Asked by EURACTIV whether the increased frequency of extreme storms should also increase prioritisation of climate change mitigation measures in the EU and US, EU Energy Commissioner Günther Oettinger was bluff.

“That’s an extreme and interesting question,” he said. “First, let's hope that there will be no disaster and that our American partners will survive in the best manner [possible] in the New York state region.”

“Second, let's wait and see what the election next week will bring.”

Oettinger said that because the US and China emitted 45% of the world’s carbon dioxide – compared to the EU’s 12% – US engagement was needed.

“We need binding commitments and we must look to the global balance beyond our borders,” he added.

In a hint of EU energy security measures to come, Oettinger also noted that “if we import all our gas from Russia, and our Russian partners have to heat their buildings with old coal plants, it is not a good partnership for our climate change challenges.”

Obama: 'Surprised' that global warming was not raised during US campaign

As Hurricane Sandy prepared to make landfall on 27 October, President Barack Obama broke his campaign silence on global warming to tell an interviewer on MTV that he was “surprised that it didn’t come up in one of the [TV] debates” with Republican challenger Mitt Romney.

Green bloggers expressed incredulity that the president apparently felt obliged to wait for the debate moderator or his opponent to raise the subject.

Even so, Obama conceded that: “We’re not moving as fast as we need to, and this an issue that future generations, MTV viewers, are going to have to be dealing with even more than the older generation is, so this is a critical issue.”

The US is not a signatory to the Kyoto Protocol and, Obama appeared to suggest that new binding emissions targets in a successor deal were less important than research and innovation.

“In order to solve the whole problem though we’re going to have to have some technological breakthroughs,” he said, because developing world countries were continuing to build coal-fired power plants.

Kristalina Georgieva, the EU's humanitarian aid and crisis response commissioner, was the only top EU official to comment publicly on Hurricane Sandy, saying she was following the developments in the US "with concern".

"The EU Monitoring and Information Centre continues to monitor the evolution of the hurricane," she said in a statement, indicating that Commission experts in civil protection were in regular contact with FEMA, the US Federal Emergency Management Agency.

"Hurricane Sandy is yet another example of the increasing intensity and frequency of natural disasters to which even the best prepared are not immune. It's also yet another reason for us all to work on preparedness and better disaster response."

Extreme weather events are rare, which means that statistics are not always available to analyse them. But the Intergovernmental Panel on Climate Change’s extreme weather report found it probable that the incidence of heat waves and floods had increased in recent years, although there are strong regional variations.

A rise in extreme coastal high water related to increases in mean sea level was also rated at between 66%-90% probability.

IPCC scientists also expressed confidence that droughts were becoming more intense and longer, particularly in southern Europe and West Africa, but in central North America and northwestern Australia the reverse seemed to be happening.