Dominique Ristori, the European Commission’s senior civil servant in charge of energy policy, said on Wednesday (29 October) that the situation in Ukraine had given a push to a new level of cooperation between the EU and Africa.

The Ukraine crisis highlighted the EU’s dependence on Russia for gas. Diplomatic efforts to punish Russia for the annexation of Crimea were hampered by fears Moscow would turn off the taps. On 16 October, the Commission published a first-ever analysis of the consequences of a disruption of Russian gas supplies, or even a complete halt of such imports to the Union.

Driven principally by Mozambique, Nigeria, Angola and Tanzania, Sub-Saharan Africa will produce about 175 billion cubic metres per year (bcm/y) of natural gas by 2040.

The United States, powered by the shale gas boom, will produce more, with 240 bcm. Russia will produce about 130 bcm, according to research by the International Energy Agency (IEA).

Sub-Saharan gas production increased from just 7 bcm in 1990 to 58 bcm in 2012, according to the IEA’s Africa Energy Outlook, presented yesterday (29 October) in Brussels. 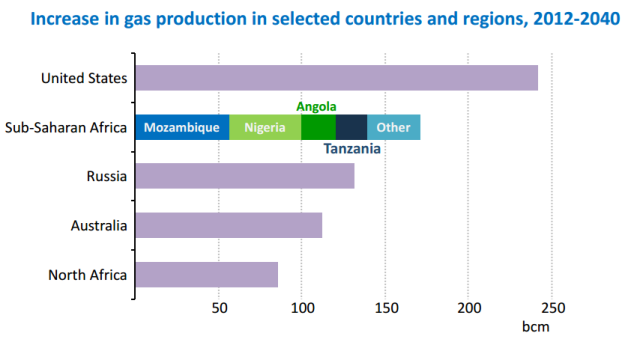 “Investment in liquefied natural gas (LNG)  projects could significantly enhance the diversification of gas imports to Europe,” he said.

Half of the overall increase in gas output would go to domestic power generation and industry, but that would still leave plenty to export to Europe.

“Sub-Saharan Africa will remain a cornerstone of global oil markets while emerging as a major new player in the natural gas markets,” Birol said.

Ristori told EURACTIV any policy, activities or investment to ensure diversification of supply would support the EU’s energy security strategy.

“We have a clear priority, which is to reduce our external dependence and this is valid in particular when we are talking about gas, where we have one dominant supplier,” he said.

The LNG could be transported by boat. Ristori said the EU would look to work with African partners on projects reducing the distance and costs of transporting the gas to the EU. The EU should also be involved in exploration, he said.

Ristori said that Africa had a lot of energy resources but was not exploiting them. “We should develop a policy orientated towards real cooperation [and] a new route to develop African energy resources,” he said.

The region has vast untapped renewables potential  and  even solar was largely unexploited, said Birol. “There is no other continent in the world where you have 320 days of very strong, bright sunshine,” he pointed out.

In the last five years almost 30% of global oil discoveries were in sub Saharan Africa. Every third barrel of oil in the world was discovered in Sub-Saharan Africa, he said. 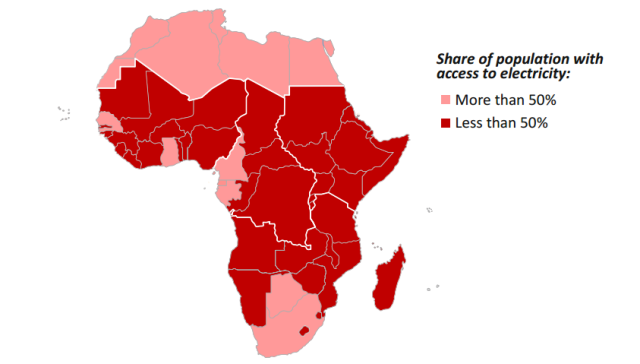 Taking the region’s strong growth and financial commitments to projects worth US$25 billion into account, the IEA predicts nearly 1 billion Sub-Saharan Africans will gain access to electricity by 2040.

530 million, primarily in rural communities would still be left without power

“Think about this as a person; what does it mean that in 2040, that there are still half a billion people without electricity?” said Birol.

“The missing link here is investment in infrastructure,” he added.

But the EU faces competition from Asia and, in particular, China, which has been investing in oil, gas and hydro projects in Sub-Saharan Africa. 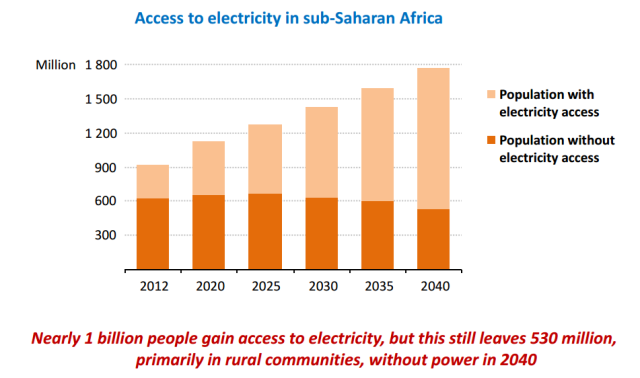 Luigi Marras is the director general of global issues at the Italian Ministry of Foreign Affairs and Development Cooperation. He said that political and economic instruments, in particular energy, needed to be used strategically.

“We have to look at areas of instability, where people are forced to flee their countries. We have to go there to fill vacuums that could be filled by radicals and terrorists,” he said.

The report was timely, because of African illegal immigrants trying to get into the EU by sailing to Italy.

“We are faced with a strong demographic pressure from Sub-Saharan African countries. A pressure that sometimes, unfortunately , not only sometimes ends in tragedies,” he said.

In October 2013, a boat sank near Lampedusa, Italy, killing 366 migrants. More recently, some 500 migrants, many fleeing Gaza, were reportedly deliberately killed by human traffickers, who sank their boat off Malta following a dispute.

Marras said Africa needed to be regarded as not only a continent that can help Europeans diversify oil and gas suppliers but as a prospective partner for business and trade.

“In order to do this we need to have a proper energy policy and to provide its people with electricity,” he said.

Sub-Saharan Africa is rich in energy resources but very poor in energy supply.

The International Energy Agency’s first comprehensive analysis of Sub-Saharan Africa has found that the region’s energy resources are more than sufficient to meet the needs of its population, but that they are largely under-developed.

The EU is looking to diversify its energy suppliers after its addiction to Russian gas was brutally exposed by the crisis in Ukraine.

Diplomatic efforts to punish Russia for the annexation of Crimea were hampered by fears Moscow would turn off the taps.