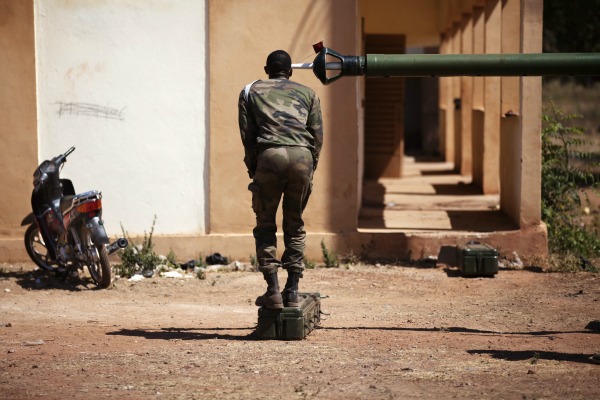 While France is engaged in a war with jihadists in Mali, EU foreign ministers meeting in Brussels today (17 January) are expected to insist on the bloc's longer-term role, saying they will unfreeze development aid money as soon as the country commits to an election roadmap.

EU foreign ministers will assess the situation in Mali after France sent troops there on Friday to dislodge Islamist insurgents from the country's north.

No further pledges are expected to be made at the meeting, with the EU ministers focusing on fast-tracking the bloc's long-planned training mission to Malian forces and support to the African troops that are expected to be sent to northern Mali later this year.

The training mission, which was initially planned for launch at the end of February, could be brought forward and deployed in mid-February, diplomats said.

But more than the short-term military aspects, the focus at the EU level will lie on the longer-term role it can play in the country's political stabilisation.

The foreign minister of Mali, Tieman Hubert Coulibaly, will join his European counterparts in Brussels for "an exchange of views" on the political situation.

"We're quite keen to make sure that despite the pressing need to address the security situation, we don't lose sight of the longer term broader political stability that needs to be put in place in Mali," said a senior British official in Brussels.

"So we need to plan for the long term as well as addressing the short term."

Diplomats said Coulibaly will be asked to update EU foreign ministers on a "political roadmap" to restore the Mali's constitutional order and move the country towards  democratic elections.

A senior EU diplomat said: "It's no secret that the political process and the roadmap towards elections haven't come forward in the way we wanted in Mali. I suppose there will be a pretty robust exchange on that. We want them to bring forward a roadmap on when they're going to have elections and restore constitutional order."

Some €150 million of EU development aid funds were frozen when the jihadists seized control of the northern part of the country in March 2012. Another €90 million was earmarked for direct support to the state but was also frozen.

These sums could be released gradually if there is commitment to a democratic reform process towards elections, diplomats said.

"If you want the EU to step in with considerable sums of money, then you need to show some commitment to that democratic reform process towards elections. And the difficult decision for us would be how much risk we're prepared to bear in supporting a state which has dying humanitarian needs but doesn't really meet the benchmarks in terms of democratisation."

Separately, the EU has pledged €82 million in humanitarian aid for Mali in 2013.

The Brussels meeting will also be attended by the EU's development aid commissioner Andris Piebalgs and his colleague in charge of humanitarian aid, Kristalina Georgieva.

France launched a surprise military operation in Mali on 11 January to dislodge al-Qaeda-linked insurgents from the country's north.

The EU voiced support for France and said it intended to speed up a training mission for Malian forces which had been planned initially for end February 2013.

On development aid policies, the European Commission has planned to allocate €583 million to Mali for the period 2008-2013, focusing on economic development, poverty reduction, food security and drinking water.

The aid was frozen in March 2012 when Islamist insurgents took control of the country's north.