Italy looks to its African entrepreneurs to ease migrant pressure 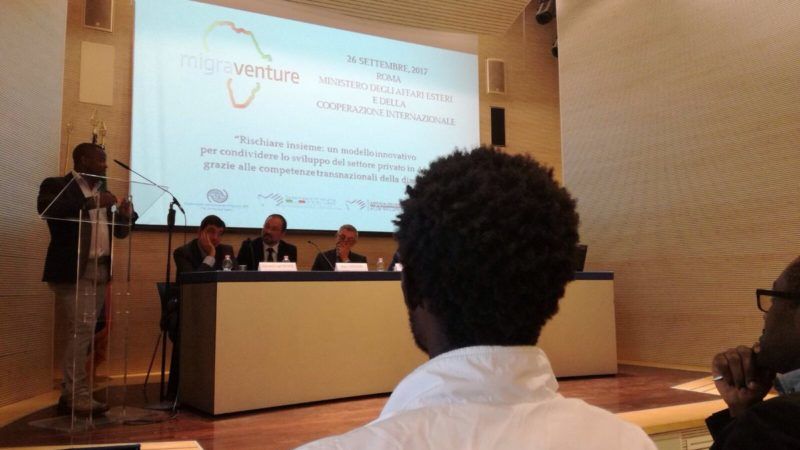 “I wanted to transfer know-how to Cameroon, thanks to MigraVenture I succeeded”, said P. Tsapgeu. [@OIMItalia Twitter]

Italy has turned to its homegrown African entrepreneurs for help in easing the economic pressures driving hundreds of thousands of migrants onto the country’s southern shores.

In a small initiative billed as symbolically significant, Rome’s foreign ministry last week unveiled a programme under which business people with African roots are offered financing to pursue job-creating projects in their countries of origin.

Struggling with the financial, logistical and political pressures generated by the influx of more than half a million migrants in the last four years, Italy’s centre-left government says Europe must do more to create the kind of opportunities that will keep ambitious young Africans at home.

The business scheme is being launched at a time when Italy has faced criticism from humanitarian organisations over the main plank of its strategy to end the migrant crisis: stopping trafficker boats from leaving Libya.

“The resources of the African diaspora (in Italy) have been hugely under-estimated,” says Marco Santori, chairman of the Etimos Foundation, one of the organisations involved in the fledgling “Migraventure” scheme.

“And that has been neglected in recent years when the focus has been on saving lives and helping those migrants who have reached Italy.”

Migraventure has approved 10 initial projects, ranging from a film school to a fish farm via a number of organic agriculture ventures.

The fish farm in Cameroon is the brainchild of Le Jeune Noubi, a 31-year-old medical student in Florence.

“The programme enabled me to reduce the amount I had to put into the project myself and reduce my exposure to risk,” he told AFP, confiding that he does not expect to ever use his medical qualifications.

“As far as I can see, what Africa really needs is jobs and economic development,” he said.

Victoria Ajibola Olwakemi is using her funds to open a kindergarten in Lagos. “Nigeria is growing strongly but working women are obliged to leave the labour market when they have children, so there is a real need in this area,” she said.

Film producer Pierre Sonna, who came to Italy in 2009 to study cinema, is setting up a school for film technicians in Douala, Cameroon.

“The country is undergoing the transition to digital and we are short of skilled people,” he said.

Each of the approved projects will receive up to €30,000 from the foreign ministry and successful applicants also benefit from one-to-one coaching and mentoring.

Migrant arrivals at Italian ports have dropped sharply since mid-July. Reports have attributed the trend to Libyan militias being persuaded to end their involvement in or tacit cooperation with the lucrative trafficking business.

The extent of Italy’s involvement in this surprise development is unclear.

But Rome has helped to beef up the Libyan coastguard and sought the cooperation of local authorities in southern Libya and neighbouring countries to make it harder for migrants to reach the Mediterranean.

Critics say the strategy, masterminded by Interior Minister Marco Minniti, will result in migrants, many of them refugees from conflict or repression, spending longer in squalid and dangerous detention camps in Libya.

Italy has also come under fire from refugee bodies over long delays faced by asylum applicants and a lack of support for the integration of those who are accepted.

Minniti moved to address those concerns with the publication on Wednesday of a plan to speed up the integration into Italian life of 74,853 of the 196,285 people currently housed in overcrowded temporary reception centres.

Of those who will benefit from support to find housing, jobs and educational opportunities, one third are refugees and two thirds have been granted leave to remain in Italy on humanitarian grounds.

The plan will be partly financed by €100 million in emergency EU funding.

Other European Union countries agreed two years ago to take in 106,000 asylum seekers from Greece and Italy but the accord expired on Tuesday with only some 20,066 relocated from Greece and only 9,078 from Italy, according to the UN refugee agency.

Popular Alternative (AP), the junior party in the coalition government, has announced it will not help the legislation through the Senate, making it unlikely to be adopted before elections due next year.

Foreign Minister Angelino Alfano, AP’s leader, said such a move would be an election gift to the anti-immigration Northern League. “A good idea at the wrong time is a bad idea,” Alfano said.