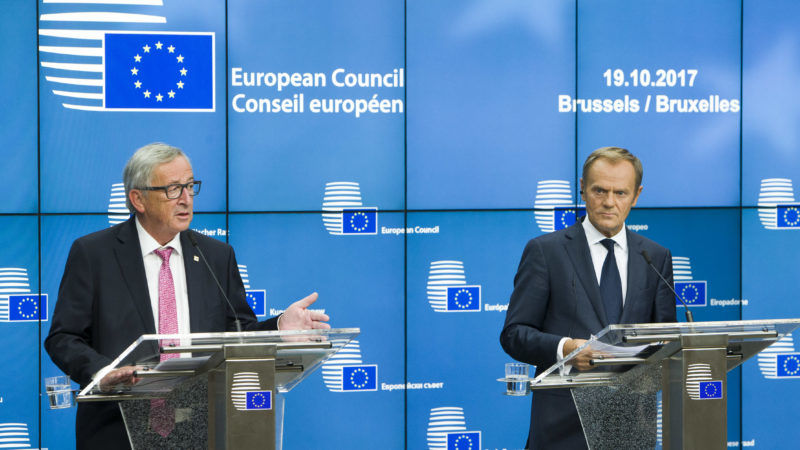 Speaking to the press after the first round of talks at the EU summit on Thursday (19 October), Commission President Jean-Claude Juncker warned that EU action was “reaching its limits” due to insufficient financing.

“We are reaching our limits when it comes to this Emergency Trust Fund for Africa,” Juncker said.

“We started by saying that we would take €1.8bn in our hands in order to be helpful to Africa, then we increased this to €2.5, then to €2.9, then to €3.1bn, money the Commission was providing by restructuring the existing budget. Member states have so far committed €175m, this is clearly not enough,” he stated.

.@JunckerEU #EUCO "We need to increase financing for #Africa. Member States have committed only €175 mio to Trust Fund. This is not enough." pic.twitter.com/dSg3iVkt6I

Close to €3bn worth of development funds have been pooled together through the EU Emergency Trust Fund for Africa, to strengthen border control, improve migration management, foster resilience and create new job opportunities in 26 African countries.

However, as Juncker said, this money has been taken form the existing EU budget, and development professionals have warned against diverting development money from long-term programmes to ad-hoc measure to stop migration.

Italy is a special case, with the highest contribution of €92m so far, but it is also the country which has itself had to take measures to stop the uncontrolled arrival of migrants.

EU leaders agreed yesterday to provide “stronger support” to Italy for its work.

“We have a real chance of closing the Central Mediterranean route,” European Council President Donald Tusk said after 28 EU leaders meeting in Brussels discussed migration, stressing the need to lower the number of arrivals from Africa going through the Mediterranean to Italy.

The EU executive told the group they needed to immediately chip in an extra €225m for migration-related projects in Africa due to run this year and early next year.

“If we do want to be as present as possible in Africa – mainly in the Northern part of Africa – we have to increase financial means,” Juncker said.

The Commission also said €1.6bn would be spent by the end of 2017 on Turkey. In 2016 the bloc promised €3bn for Syrian refugees in exchange for Ankara shutting down the route traffickers and smugglers were using to get people to Greece.

Despite sour EU-Turkey relations on several issues, German Chancellor Angela Merkel praised Ankara for hosting refugees from Syria and said the bloc should pull together another €3bn to that end.

“We have promised €3bn for the coming years in addition to the €3bn that we have already committed. We need to deliver on this promise,” Merkel told reporters on arriving for the two-day EU leaders’ summit in Brussels.

“This money helps the refugees who are living under very difficult conditions. Once again, Turkey is doing a great job here,” she said.

One response to “Juncker: Member states contributed too little to Africa Fund”