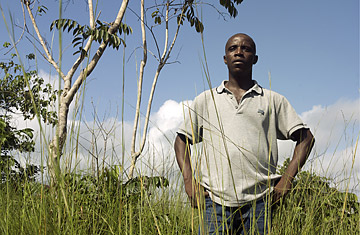 EXCLUSIVE / An award-winning Liberian environmental campaigner has called on the EU to act against at least 16 member states which have still not implemented a timber regulation to combat illegal logging, a year after it came into force.

New research from the environmental group Client Earth shows that eight EU countries have done nothing to transpose the law, while ten have only produced draft legislation. A clear majority of countries have no penalties in place to deal with illegally-logged timber entering the bloc.

Speaking from Nairobi, where he is working on new IT technologies to map illegal logging, Silas Kpanan’ Ayoung Siakor of the Sustainable Development Institute told EURACTIV that the issue should be treated as “a matter of urgency.”

“The EU needs to demonstrate that it is serious about addressing the problem and taking action against member states that do not fulfill their legal obligations is important,” he said. “It will show that they are not only trying to ensure that non-state actors follow the regulations, but that they will make sure that their own member states actually comply.”

Siakor won the prestigious Goldman environmental prize in 2006 for his high-risk work exposing the then-president Charles Taylor’s use of profits from widespread illegal logging to fund a merciless 14-year-war. His work led the UN Security Council to ban the import of Liberian timber. Taylor is now serving a 50-year sentence for war crimes.

Flouting of the timber law would send “a very bad message” to African governments, Siakor said. “It would undermine the EU’s public message that it is trying to curb illegal logging and it would increase deforestation. Politicians would turn to people like ourselves and say: ‘Look! Even the EU does not see the need to take action on illegal logging’.”

“It would also show a lack of commitment to helping Africa and the Global South to address this problem,” he added.

According to the as-yet unpublished new data from Client Earth, based on questionairres completed by each country, just ten EU states have registered the timber regulation on their statute books: Austria, Denmark, Croatia, Germany, Cyprus, Czech Republic, Portugal, Luxembourg, Slovenia and the UK.

But eight countries – Estonia, Lithuania, Greece, Malta, Hungary, Slovakia, Spain and Italy – have taken no action. The Netherlands has an interim system in place, and Latvia declined to comply with the survey.

The European Commission could send warnings to the eight non-compliant states – and to the ten which have only produced drafts. If these had no effect, costly infringement proceedings could follow at the European Court of Justice.

Campaigners say that even where enforcement regimes have been enacted in Europe, they are lax and riddled with inconsistencies. Penalties for violating the law, for example, can reach €7,500 in Bulgaria, €5 million in the Czech Republic, and an unlimited sum in the UK.

The Commission team monitoring the file appears to be under-funded and operating almost as a ghost ship, sources claim. The Environmental Investigation Agency says that illegally logged timber from Myanmar (Burma) worth more than $8 million was last year imported into the EU by countries such as Germany and Denmark – which have transposed the logging law – as well as Italy, Belgium and Sweden, which have not.

The timber regulation was intended to provide a deterrent for countries exporting illegally logged timber, making the EU’s incentive of Voluntary Partnership Agreements (VPAs) for certified timber all the more attractive.

Negotiations are ongoing with several countries, including Indonesia and the Democratic Republic of Congo to establish these VPAs.

Silas said that the agreements had “huge potential to improve governance systems in countries that the EU is working with. But to get the ongoing political and financial support for action, there needs to be a motivation to keep the VPA countries engaged.”

However, not all environmental campaigners in the Global South agree. Isaac Rojas, the regional coordinator for Friends of the Earth in Costa Rica said that a stronger focus should be placed on land tenure rights for indigenous peoples and communities.

Even when their land management procedures were technically ‘illegal’, they were still better for the planet he argued. “In Central America, regulations [like the VPAs] coming from the EU are linked to free trade agreements,” Rojas said.

“The EU and Central American countries are calling for partnership agreements but their most important part deals with free trade," he added. "This means that if the industrial logging sector feels their rights will be violated by new forest legislation [supporting indigenous people] in say, Honduras, they can sue the Honduran government.”

The European Parliament and the Council laid down the EU Timber Regulation (EUTR) on 20 October 2010.

The European Commission estimates that deforestation and forest degradation accounts for about 20% of global CO2 emissions. Chatham House also links the international trade in illegal logging to billions of euros in lost revenue for governments, corruption, armed conflict, the destruction of forest-dependent communities, and the undermining of the rule of law and good governance.

In 2012, Interpol and the UN launched Project Leaf, an initiative to combat illegal logging and organised forest crime. In February, Interpol said almost 200 people had been arrested in a wide-ranging international anti-illegal logging operation. A three-month effort in Central and South American countries has seized  €6 million worth of timber.