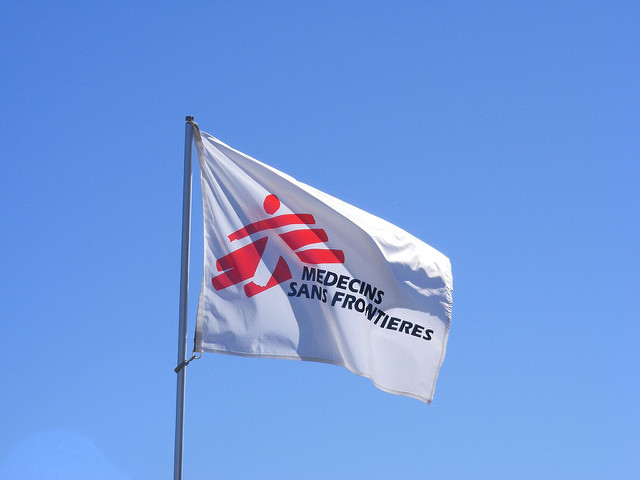 MSF (Doctors Without Borders) announced today they would refuse EU funds in protest over the bloc's refugee policies. [RichardRoche/Flickr]

Medical aid group Doctors Without Borders on Friday said it would no longer take funds from the EU in protest at its “shameful” policies on the migration crisis, including a deal with Turkey.

“MSF announces today that we will no longer take funds from the EU and its member states in protest at their shameful deterrence policies and their intensification of efforts to push people and their suffering back from European shores,” the group said in a statement.

The Nobel Peace Prize-winning MSF singled out the EU’s deal with Turkey in March to stem the biggest flow of migrants into the continent since World War II, many of them from war-torn Syria.

“This is really about Europe’s refugee shame,” Jerome Oberreit, international secretary general of MSF, told a press conference in Brussels.

He accused member states of a “shameful European response focused on deterrence rather than providing people with the assistance and protection they need.”

“The EU-Turkey deal goes one step further and has placed the very concept of ‘refugee’ and the protection it offers in danger,” Oberreit added.

MSF has been heavily involved in caring for migrants in locations including the Greek island of Lesbos and the French port of Calais, as well as operating a boat called the Argos which saves lives in the Mediterranean.

MSF chief: The way Europe treats refugees is 'a disgrace'

Joanne Liu, the energetic president of Médecins Sans Frontières (Doctors Without Borders), says that the response to refugees in Greece is “indecent”. She contends that refugees should be offered a “welcome package” when they arrive in Europe.

Under the Turkey deal, Ankara agreed to take back all migrants and refugees landing in the Greek islands who did not apply for asylum, and to crack down on people smuggling across the Aegean Sea.

In exchange, the EU said it would resettle one Syrian refugee from camps in Turkey for every Syrian that Ankara takes back from Greece.

Turkey was meanwhile offered visa-free access, increased aid and speeded up EU accession talks if it met certain conditions, one of which was changing its anti-terror laws.

MSF said 8,000 people including hundreds of unaccompanied minors had been left stranded in the Greek islands by the deal.

The European Commission, the executive arm of the 28-nation EU, said it “takes note” of the MSF decision, stressing that it affected only just over one percent of the Commission’s 1.5 billion euro annual aid budget.

Commission spokesman Margaritis Schinas rejected criticism of the Turkey deal, saying: “The Commission prefers the interpretation of our 28 member states, of the Council of Europe and the United Nations, which are closer to our analysis of the deal rather than the one that the MSF did today.”

He pointed out that potential partners included Somalia, Eritrea, Sudan and Afghanistan, “four of the top 10 refugee-generating countries.”

“We cannot accept funding from the EU or the Member States while at the same time treating the victims of their polices. It’s that simple,” Oberreit added.

Hundreds of world leaders and politicians will descend on Istanbul on Monday in a nominal attempt to reform the global humanitarian system, despite criticism that their summit is a photo-opportunity that will achieve little.

It added that its activities are 90 percent privately funded.

“We are looking for other funding channels,” MSF migration expert Aurelie Ponthieu told the press conference. “We are not cutting down programmes.”

The charity said its medics had treated 200,000 men, women and children in the Mediterranean and in Europe in the last 18 months. It also received 6.8 million euros from Norway, which is not part of the EU.

Europe has struggled to deal with a wave of more than one million refugees and migrants fleeing war and poverty in Syria, the wider Middle East and Africa since the start of 2015.