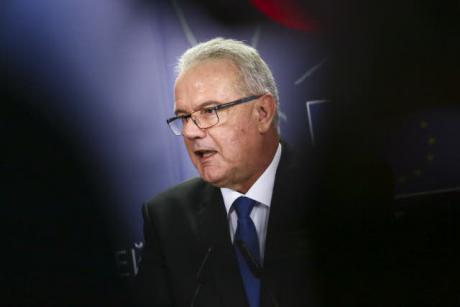 Despite one year of experience in Brussels, the EU’s new Development Commissioner Neven Mimica is still a rookie and low in the hierarchy of the Juncker Commission, leaving him with much to prove on development policy, according to aid groups interviewed by EURACTIV Germany.

“We must show that development policy is working,” the EU’s new Development Commissioner Neven Mimica said at his hearing the European Parliament at the end of September.

“83% of Europeans consider development cooperation important, and 61% want politicians to spend more money on development aid,” he said to back his statement.

But while Mimica hopes to put wind in the sails of EU development policy, that is precisely what critics doubt he will bring to the new Commission.

“Mimica will have little to say in the Commission. He is low in the hierarchy. Just as always development policy will be undermined by liberal market trade policy and a military-focused foreign policy,” said Niema Movassat, development policy expert for the Left Party in the German Bundestag.

The Commission’s new structure under Jean-Claude Juncker, including more power given to vice-presidents, is problematic in the eyes of many development analysts. “The development policy agenda will fall through the cracks,” Movassat told EURACTIV Germany.

Meanwhile, a considerable share of the development portfolio will be under the charge of the EU’s High Representative Federica Mogherini.

“That could be a problem,” said Natalia Alonso, head of Oxfam’s Brussels office, speaking to EURACTIV Germany. “Development policy runs the risk of being instrumentalised for the purposes of foreign policy.”

But NGOs welcome the fact that Mimica has taken notice of the challenges regarding the new Commission structure.

“Mimica must simply make the best of it. His portfolio is not as insignificant as it may seem at first glance,” Tobias Kahler told EURACTIV Germany. Kahler is director of the German branch of ONE, an NGO that focuses on development and development aid.

In his parliamentary hearing, the Croat indicated political coherence as one of his key areas of focus. The new Development Commissioner said he would work closely with the commissioners for foreign policy, trade and humanitarian aid.

In addition, Mimica promised to give every single legislative proposal an assessment over its development policy quality. According to Oxfam, assessments of this kind are urgently needed, for example in cases like the international agreement on tax evasion.

Every year, developing countries lose billions in tax revenues, said Oxfam, pointing out that these funds could be used in the fight against poverty.

“Our development funds pale in comparison,” said Natalia Alonso, referring to tax evasion costs. Mimica should also be involved in environmental and climate policy, she commented, saying that this would be the only way to sustainably reduce poverty and inequality in the world.

Mimica has been a member of the European Commission since July 2013, when he took charge of consumer protection. In the 1990s, he worked as a diplomat, before entering politics as Croatia’s Minister for European Integration in 2001. Not long afterwards, the social democrat even served as deputy prime minister in the Croatian government.

Now Mimica, who is still relatively new to Brussels, is taking over the EU’s development portfolio just in time for 2015, which the EU has dubbed the “European Year of Development”. Under this heading, the EU hopes to raise awareness for development policy issues among Europeans.

Then, at the end of the year, the international community is set to agree on the post-2015 Development Agenda.

Mimica has said he will push for universal targets with an “optimal balance” between economic, social and ecological improvements for humanity. Here, combatting poverty must continue to be a top priority and EU member states must increase their development funding, the Croatian politician indicated.

To do this, “innovative financing models” must be created for development cooperation, the Development Commissioner said. This could include using revenue from the planned financial transaction tax or greater cooperation with the private sector.

Another priority Mimica mentioned was renewal of the Cotonou Agreement with African, Carribean and Pacific (ACP) countries. The treaty was signed in 2000 and will expire in the year 2020. At that time it must be adapted to the “new realities of the post-MDG Agenda”, Mimica explained.

A man “without a vision”?

“We welcome the fact that Mr. Mimica was approved by the European Parliament,” said ONE Germany’s director Kahler. The Croat has political experience and speaks a variety of languages, he commented.

“Mimica made a good impression in the hearing,” said Oxfam’s Europe chief Alonso. Now the Croat’s performance depends on how he is able to exert pressure on heads of state and government, promoting stronger MDGs.

Karin Sohet, from the Association of World Council of Churches related Development Organisations in Europe (APRODEV), warned against premature euphoria. “Mimica was hardly drilled in the Parliament hearing and he has no visions.”

So far, the Croat has only repeated what has already been said in the European Commission’s Agenda for Change, Sohet told EURACTIV Berlin. “Apparently Mimica wants to carry on exactly as his weak predecessor Andris Piebalgs.”

Commissioner-designate for Development Neven Mimica sailed through his confirmation hearing in the European Parliament in September.

The Croat commissioner said his first priority would be to help achieve an ambitious agreement on the post-2015 UN millennium goals for development.

The first millennium goals have delivered positive results, he said, adding that this should not lead to complacency.

“In order to maximise aids impact we will have to fully harness the potential of improve aid effectiveness, donor coordination and blending. Not to compensate for official aid, but to complement it," he said.

"In addition we need to help our partners to increase their national resources including through good governance, better financial management, fighting tax evasion, and fair and effective taxation system.” Mimica added.