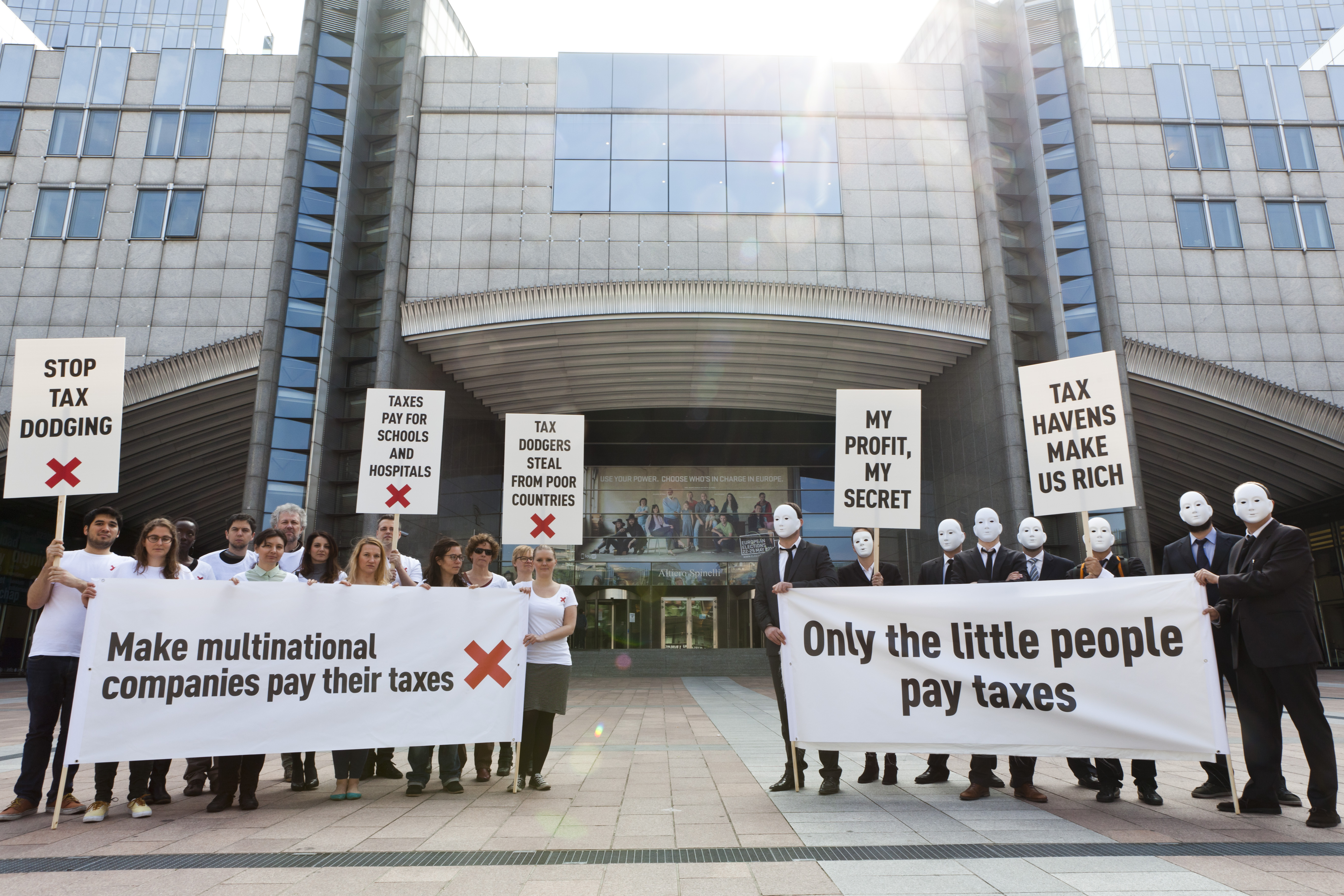 Representatives from across Europe, including France, the UK and Spain, demonstrated outside the European Parliament to highlight how corporate tax evasion drains not only the taxpayer’s pocket but also developing countries’ budgets.

Tove Maria Ryding, tax coordinator at the European Network on Debt and Development (Eurodad) said, “In times of austerity, it is very sad that European societies keep losing about €1 trillion per year due to tax dodging.”

“At the same time, developing countries are losing more resources due to corporate tax dodging than they receive as development aid,” Ryding added.

A report by Concord, a group of European NGOs, last year found that tax dodging by EU companies is costing poor countries at least $100bn (€74bn).

As part of the campaign, non-governmental organisation have also sent questions to all major political groupings, and activists are visiting election meetings across Europe to question the candidates’ commitment to making multinational companies pay their taxes. Europe goes to the polls to elect the new European Parliament from 22-25 May.

“It must be a top priority for the election candidates to tackle this problem. Now is the time to make multinational companies pay their fair share of tax,” Ryding said.

Fran Witt, international advocacy advisor at Christian Aid UK, added: “We are hoping that Britain elects MEPs who are willing to put tax dodging by multinational companies and put financial transparency at the top of the European Parliament’s agenda for the next five years, which will be crucial for the fight against corporate tax dodging and financial secrecy.”

A December report by Eurodad, Giving with one hand and taking with the other, found governments are failing to demand sufficient levels of tax transparency from companies. No government has implemented full country-by-country financial reporting requirements for multinational companies and the data that governments are exchanging is rarely publicly accessible.

Anne-Sophie Simpere, of Oxfam France, argued that a European level regulation forcing multinationals to report financial information on a country-by-country basis across the EU could enforce transparency. It would cover tax, benefits and information about their activities in each territory where they have subsidiaries, she said.

The French government claims to be in favour of such a regulation, Simpere said, but won’t move forward unless it has support from other national governments and politicians in Europe.

In October last year, Britain became the first EU country to commit to an obligatory public register of the true owners of companies as part of an ongoing crackdown on corporate tax evasion. Campaigners have called on the UK to include trusts, which are legal arrangements where people are appointed to look after someone else’s assets, in the register.

While still President of the European Parliament, Socialist lead candidate for Commission president Martin Schulz warned that revelations of tax evasion by major companies were leading to a loss of trust among the European public.

Schulz said the issue could lead to “very difficult social problems” in Europe if tax laws were not “transparent.”

His main rival Jean-Claude Juncker, of the European People’s Party, was Prime Minister of Luxembourg, a country with a reputation of secrecy in the financial services industry, when the country agreed in April to automatically exchange information on bank accounts with other EU countries from 2015.  The decision came in the face of growing international pressure.

Campaigners conceded that the European Parliament had achieved some positive work on the issue but wanted that to continue after the elections.

The commission has previously pointed out that the EU adopted legislation in June on country-by-country reporting, which requires large companies in the extractive industry to publicly disclose payments to governments of more than €100,000.

The EU is the only region of the world to have a legally binding commitment to policy coherence for development, set out in the 2009 Lisbon treaty. Under the PCD, the aims of EU development co-operation should not be undermined by other EU policies on climate, trade, energy, agriculture, migration and finance.

Andris Piebalgs, the EU development commissioner, has previously said PCD has been a priority since the start of his mandate but conceded bringing it to life was not an easy task.

Tax evasion costs billions every year. According to the European Commission, €1000 billion are lost yearly.

Developing countries lose hundreds of billions of euros each year. To stop his global phenomenon, the automatic exchange of data between tax administration will allow each country to be informed if one of their citizens opens an account abroad, makes a transfer, creates a company, etc.