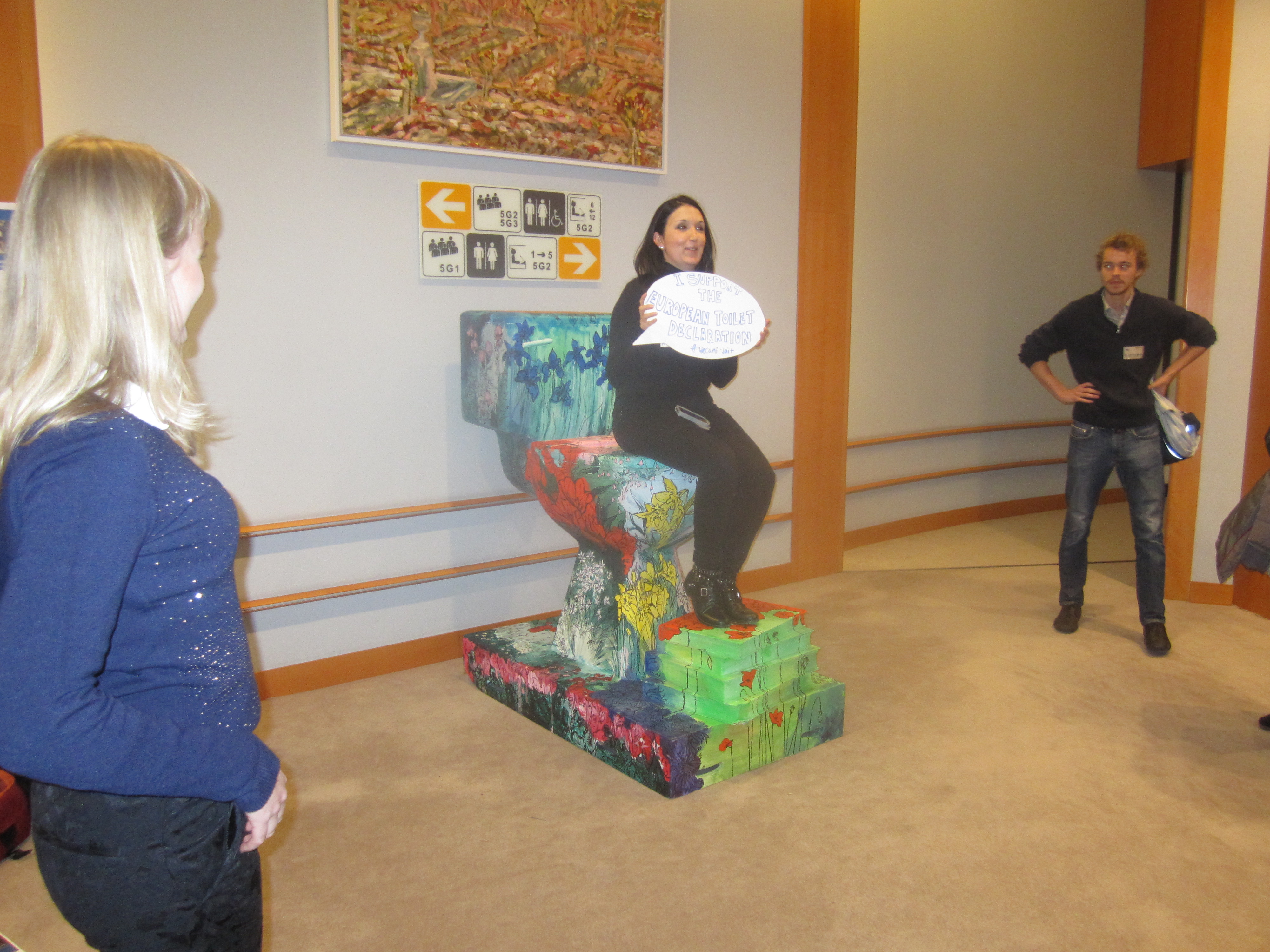 An oversized toilet was brought to the European Parliament by WaterAid. [Georgi Gotev]

World Toilet Day was marked today (19 November) in the European Parliament with a conference, during which pressure groups called on new Commissioner for Development Neven Mimica to not be shy about discussing open defecation.

Of the world’s seven billion people, 2.5 billion do not have acceptable sanitation, according to UN data. 1 billion people still defecate in the open. Women and girls risk rape and abuse because they have no toilets that offer privacy.

>> See Infographic: Why are toilets important?

Eliasson said that every day, 1.8 billion people were waking up in the morning with no choice but to drink water contaminated from human waste. A billion people defecate in the open, in gutters, behind bushes, in rivers or ponds.

Earlier this year, Eliasson launched a campaign to break the silence on open defecation and spur dialogue, as part of the UN Call to Action on Sanitation.

“If we want to eradicate poverty and if we want to ensure decent sanitation for all, then we have to start talking, openly and widely, about toilets and about open defecation”, Eliasson said.

Hannah Neumeyer from the NGO WASH United showed a picture depicting a river border in India to illustrate the problem. Two men were defecating on the shore, while others were nearby fishing, washing their clothes or bathing.

Prof Val Curtis of the London School of Hygiene and Tropical Medicine was even more provocative. She scattered artificial human excrement on the European Parliament’s carpets. She told the audience how, on a visit to the African countryside, she picked one up, to the dismay of her escorts, took it to the village.

Curtis picked up one of the fake poos, mimicking her discourse in the village, when she warned of the risk of contamination. She also asked people in the audience to shake hands, telling them, “Just imagine that the person with whom you are shaking hands with hasn’t gone to the loo.”

Curtis argued that disgust was in fact the most powerful emotion for making people conscious of the issue. She also discussed a campaign in India, featuring a cartoon about the importance of hand-washing. Over one year, the number of people doing so had grown from 4% to 30%.

Margaret Batty of WaterAid was even more provocative. She asked, “Can we talk about shit in the Parliament?” and added, “We’re talking about people shitting in the open”.

Batty argued that the EU needed leaders like Eliasson, who are not shy about discussing the issue. She said that she hoped that the new Commissioner responsible for development would take a leading role in discussing it in the EU. Neven Mimica was not present at the event, but his services were represented.

The idea that the EU should show its leadership in promoting sanitation was raised by MEP Catherine Bearder.

“We have traditionally been the largest development supporter in the world, but we have to step up our efforts”, she said, adding that sanitation had been one of the targets where a lot more needed to be done.

“Everybody on this planet has to go to the toilet at least once a day and imagine what it’s like if you don’t have access to a toilet. The EU has to show its leadership in development not only because its’s the right thing to do, but also because the long-term benefits are clear”, the British liberal said.

Participants at the event signed up to a “European Toilet Declaration”, that calls for, among other things, recognition that “access to safe, clean and private toilets is a basic human right and a precondition for human development”.

Asked by EURACTIV to explain if this meant that public money should be used for building toilets around the world, Hannah Neumeyer said that sanitation systems that serve many people effectively are built with public money.

Barbara Frost, CEO of WaterAid told EURACTIV her organisation was an international NGO focusing on countries where many people are living without access to safe water to drink and without toilets.

She said WaterAid was promoting solutions that could bring long-term sustainable change, affordable solutions and solutions people could manage themselves.

Frost said WaterAid was working at local level, with local people, with local entrepreneurs, local NGOs also looking at sanitation in the whole spectrum, from the toilets to the waste removal and the disposal of that. Also, the organisation was working at the global and international level, to get more attention to the issue, she explained.

“We are very keen to partner with others who also got shared interest in a world where everybody has access to safe water and sanitation”, she added, mentioning Unilever as a company who “knows a lot” about those issues.

Frost also said that it would be “great’ if there were effective ways of turning human excrements into productive waste, like fertilisers and biogas, and make the issue more “sexy”.

She referred to Ian Eliasson [quoted above] who decided to talk openly about an issue, which otherwise “would hold back the development of humankind”.

Jean-Laurent Ingles of Unilever told EURACTIV that the interest in his company in the issue of sanitation and toilet was also due to the fact that the company’s brand Domestos made good business in developing countries.

“What we believe is that we can turn development into business opportunities, if you do it well and in a responsible way. For example I’m heading the household care of Unilever and my business is toilet cleaning. So we have a complete vested interest in there. If there are toilets, there is toilet business, and if there are no toilets, there is no such business,” he said.

Ingles added that Unilever has a company plan, putting sustainability at the heart of their business agenda.

“One of the pillars of the plan is improving livelihood for 1 billion people in the area of health and hygiene. We have recently pledged to help provided improved access to sanitation for 25 million people by 2020”, Ingles said.

In 2013, the United Nations General Assembly designated 19 November as World Toilet Day. In the Western world, people take the toilet for granted, and don’t realise to what extent the lack of such facilities hampers the lives of millions of people.