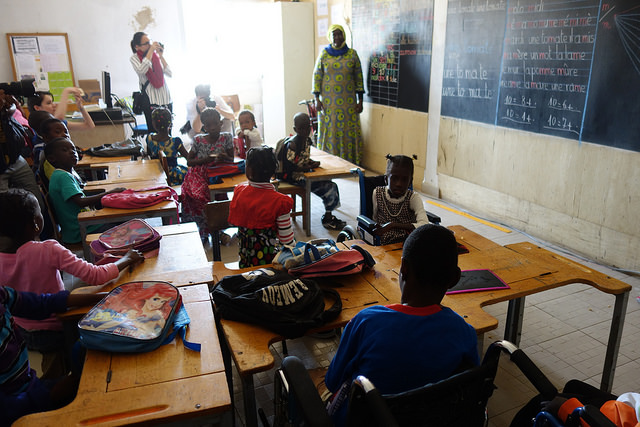 Teaching at a school for the disabled in Dakar, Senegal, part funded by EU aid. [MattTempest/Flickr]

The post-Brexit slump in the pound will cost developing countries nearly $4bn (£3.1bn, €3.6bn) in the coming year, with reduced trade and aid, risk-averse financial markets, lower growth and sharply reduced remittances all playing a role, a report shows.

Sterling’s 10% devaluation in the first week after the vote, coupled with lower UK gross domestic product, will hit exports from the least-developed countries (LDCs) by roughly $500m, a drop of 0.6%, according to the UK-based Overseas Development Institute. The think-tank says the figure is a conservative estimate of the short-run trade effect.

The UK takes approximately 5% of exports from LDCs, and almost 70% of these are consumer goods such as garments. Bangladesh, Belize, Kenya, Mauritius and Fiji are forecast to be hit particularly hard.

There will also be a knock-on effect on developing countries’ exports to the EU because the euro has fallen against the dollar.

“Exporters of non-basic consumer goods from developing countries to the other EU member states may also be hit. For example, Ethiopia may be affected in its exports of flowers to the EU. The UK and the EU represent 30% of the LDCs exports and for some countries, such as Bangladesh, they represent above 50% of their total exports,” the report’s authors said.

However, some developing nations could benefit from investors’ flight to traditional safe haven assets, such as gold, while the long-term impact of Brexit will be heavily influenced by the future shape of UK trade with the rest of the world, they added.

“In the long run, the effects on poorer countries will depend on the trade deals the UK is now able to negotiate around the world, and when done well, they could benefit poorer countries. With the right policies in place, it may also be possible to mitigate some of the economic shocks already being felt,” said Dirk Willem te Velde, head of the international economic development group at the ODI.

The value of remittances from the UK will fall by the equivalent of $1.4bn of spending in developing countries, with India and Nigeria experiencing falls of about $370m each. The countries most dependent on UK remittances include Uganda, Kenya, Mauritius, South Africa and St Lucia.

If the pound declines further, the costs for developing countries will be even more severe, and this at a time when many resource-rich states are already struggling because of lower oil and commodity prices, a stronger US dollar and a slowing Chinese economy.

Another major risk comes from nervous investors taking their money out of emerging markets.

“By some estimates, the Brexit vote triggered roughly $210m in outflows from emerging markets … Looking ahead, a reversal in UK foreign direct investment is a key risk for South Africa, Nigeria, Mauritius, Kenya, Ghana and Zambia. Although Hong Kong, Malaysia, Singapore and India are also subject to this risk, their relatively more positive external financing positions will mitigate any downside impact on their currencies,” the report’s authors said, noting that in Latin America, Brazil could be affected the most by lower investment from the UK.

However, there are some potential silver linings.

“The opportunities of Brexit for developing countries rely on specific commodity price changes … changes in distribution of aid, cheaper imports from the UK, and the ability to gain from new trade deals,” said the study’s authors.

Prices for commodities such as sugar, cocoa and coffee have also increased, and for producer countries there could be a short-term benefit, as imports from the UK and EU will be cheaper while prices for key exports will be higher. But these effects are likely to be short-lived.

Related: With aid under attack, let’s be honest about how we spend taxpayers’ money | Simon O’Connell

The main emerging market currencies have declined by 4-6% against the yen, also seen as a safe haven in times of uncertainty. Experts say risk aversion – or a flight to traditionally safe assets – will dominate sentiment.

“The scope for further risk aversion in global financial markets, stemming from the UK, raises the risk for potential volatility in emerging and developing country currencies and higher borrowing costs, both of which would be harmful for growth prospects,” said Phyllis Papadavid, team leader on international macroeconomics at the ODI.

How the UK distributes funds will also potentially be affected by its withdrawal from the EU, said the report’s authors, who noted that about 10% of the UK’s almost £12bn annual aid budget is channelled through the European bloc.

“It might be that Commonwealth countries, such as small and vulnerable middle-income countries, will be beneficiaries, but we cannot be sure, as aid through EU-pooled instruments might still be an option where it is effective,” the report’s authors said, adding that aid would decline by approximately $1.9bn because of sterling’s devaluation.

To mitigate these multiple shocks, the UK could negotiate a trade deal that is close to existing EU arrangements and maintain an open approach to developing countries, boosting trade. Developing countries can also diversify their economies to become less dependent on UK aid, trade, remittances and investment.

The report acknowledged the profound uncertainty now cast over some of the world’s most existential crises, saying it was not yet clear how global negotiations on climate and security would be affected.

“The EU may face a long period of disintegration, instability and rebranding. Paradoxically, this may lead to a strengthening in the fight for the global ideals the UK and the EU stand for: human rights, justice, equality, free trade and investment and open societies, but this is not guaranteed,” said the authors.

“The UK would need to seek new alliances (G20, Commonwealth, UN) in promoting the provision of those global public goods that are less well served by EU structures alone.”

Open data, and the transparency and effectiveness of international development aid, have failed to get the attention they deserve.