This is the “strongest absolute growth” since the existence of the fair trade label, explained Dieter Overath, managing director of the TransFair association, while speaking to journalists in Berlin.

Overath described the German fair trade market as the most “dynamic worldwide”. The political consciousness among German consumers has grown considerably over the past few years. In light of catastrophes and deficiencies around the world, an increasing number of people want to make a positive contribution.

The four most important product categories are still coffee with 18% growth. Bananas also “made a real jump” with an added 62% and an 8% market share in the German banana market. Every fourth rose purchased was grown, picked, traded and sold under fair conditions. In addition, 7,590 tonnes of fair trade cocoa were sold in 2014, a sixfold increase compared to the previous year. 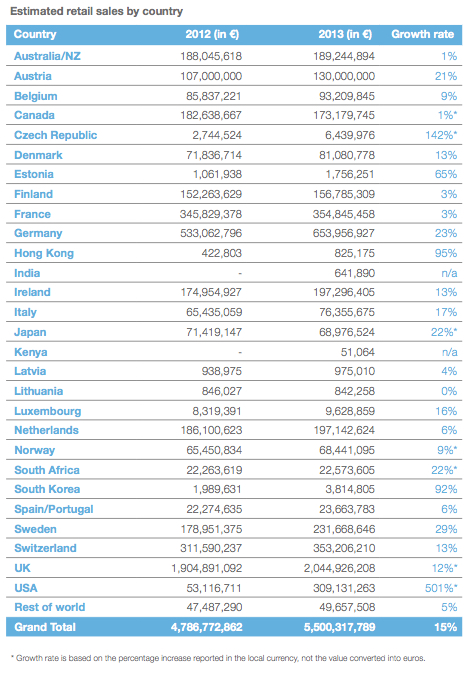 Germany’s per capita expenditure for fair trade products is currently around €10.

“In the United Kingdom and Switzerland consumers spend three to four times as much on fair trade goods,” Overath pointed out. Still, he said he sees fair trade products as being on the upswing in Germany.

Discount and chain stores, in particular, are increasingly choosing to back fair trade products, occasionally out of fear that soon people in the global south will no longer be willing to work in the fields for starvation wages.

“Even if their attempt is unrealistic, the younger generation will migrate to the cities as long as nothing changes regarding the income situation on the plantations,” Overath said.

By the end of 2015, Transfair hopes to jumpstart a fair trade label for textiles. But so far it is unclear whether the plan will only cover cotton clothing or also include synthetic textiles, Overath said.

The goal of the new label is to maintain compliance with minimum social standards along the entire supply chain. Though reliable labels already exist, such as GOTS, the traditional fair trade label is the most well-known and most trusted, Overath explained.

At the end of last year, TransFair joined Development Minister Gerd Müller’s Textile Alliance. There, it hoped to advise various stakeholders – fashion companies and NGOs – on standard-setting, control and empowerment of suppliers.

In the long-term, Müller plans to introduce another sustainability label dubbed the “green button”. But the Textile Alliance is critical of the plan because not a single notable fashion company has joined yet.

“However, we still support the Alliance because it keeps the discussion on social standards in the fashion industry running and tries to raise the baseline level,” said Michael Fuchs, executive chairman at Transfair.

But consumers will have to dig deeper into their pockets to purchase items with the planned fair trade tag. “To pay for living wages in factories, Germans will have to pay higher prices. Retailers must have the courage to ask their customers for more money,” said Transfair’s managing director Overath.

To provide a long-term guarantee of living wages in manufacturing countries, unions must also be assembled and strengthened.

“That does not work in a coup de main. That is a long-term producer, which costs money.”

The fair trade label is applied to all products for which smallholders and plantation workers received appropriate prices and work under fair working conditions.

In addition, there should be local investment in education and development projects as well as environmental production. In Germany, an estimated 42,000 stores offer products with the label.

The TransFair association was founded in 1992. The organisation itself does not handle goods but bestows the fair trade label upon fairly traded products and promotes awareness on sustainable consumption.