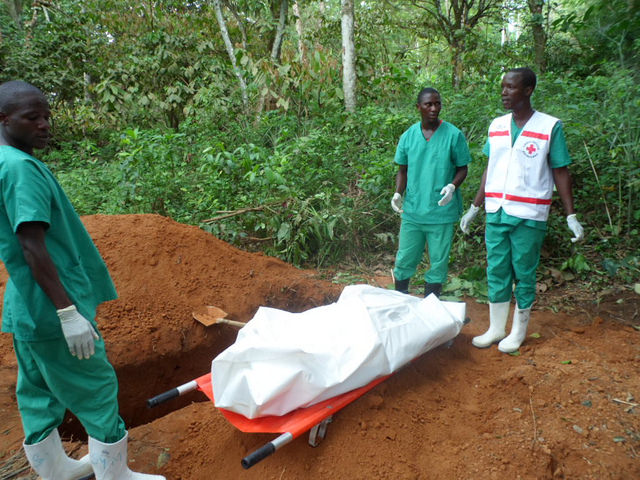 Those numbers are based on air traffic remaining at full capacity. Assuming an 80% reduction in travel to reflect that many airlines are halting flights to affected regions, France’s risk is still 25%, and Britain’s is 15%.

“It’s really a lottery,” said Derek Gatherer of Britain’s Lancaster University, an expert in viruses who has been tracking the epidemic – the worst Ebola outbreak in history.

The deadly epidemic has killed more than 3,400 people since it began in West Africa in March and has now started to spread faster, infecting almost 7,200 people so far. Nigeria, Senegal and now the United States – where the first case was diagnosed on Tuesday in a man who flew in from Liberia – have all seen people carrying the Ebola hemorrhagic fever virus, apparently unwittingly, arrive on their shores.

France is among countries most likely to be hit next because the worst affected countries include Guinea, alongside Sierra Leone and Liberia, which is a French-speaking country and has busy travel links back, while Britain’s Heathrow airport is one of the world’s biggest travel hubs.

France and Britain have each treated one national who was brought home with the disease and then cured. The scientists’ study suggests that more may bring it to Europe not knowing they are infected.

“If this thing continues to rage on in West Africa and indeed gets worse, as some people have predicted, then it’s only a matter of time before one of these cases ends up on a plane to Europe,” said Gatherer.

Belgium has a 40% chance of seeing the disease arrive on its territory, while Spain and Switzerland have lower risks of 14% each, according to the study first published in the journal PLoS Current Outbreaks and now being regularly updated at www.mobs-lab.org/ebola.html.

The World Health Organization (WHO) has not placed any restrictions on travel and has encouraged airlines to keep flying to the worst-hit countries. British Airways and Emirates airlines have suspended some flights

But the risks change every day the epidemic continues, said Alex Vespignani, a professor at the Laboratory for the Modeling of Biological and Socio-Technical Systems at Northeastern University in Boston who led the research.

“This is not a deterministic list, it’s about probabilities – but those probabilities are growing for everyone,” Vespignani said in a telephone interview. “It’s just a matter of who gets lucky and who gets unlucky.”

“Air traffic is the driver,” Vespignani said. “But there are also differences in connections with the affected countries (Guinea, Liberia and Sierra Leone), as well as different numbers of cases in these three countries – so depending on that, the probability numbers change.”

Patients are at their most contagious when Ebola is in its terminal stages, inducing both internal and external bleeding, and profuse vomiting and diarrhea – all of which contain high concentrations of infectious virus.

But the disease can also have a long incubation period of up to 21 days, meaning that people can be unaware for weeks that they are infected, and not feel or display any symptoms.

This, it seems, is what allowed the Liberian visitor Thomas Eric Duncanto to fly to the United States and spend several days there unaware that he was carrying the deadly virus, before being diagnosed and isolated.

In the European Union, free movement of people means someone unknowingly infected with Ebola could easily drive through several neighboring countries before feeling ill and seeking help, and spend weeks in contact with friends or strangers before becoming sick enough to show up on airport scanners.

Jonathan Ball, a professor of molecular virology at Britain’s Nottingham University said that even with exit screening at airports of affected countries, the long, silent incubation period meant “cases can slip through the net”.

“Whilst the risk of imported Ebola virus remains small, it’s still a very real risk, and one that won’t go away until this outbreak is stopped,” he said. “Ebola virus isn’t just an African problem.”

However, the chance of the disease spreading widely or developing into an epidemic in a wealthy, developed country is extremely low, healthcare specialists say.

According to the latest Ebola risk assessment from the European Centers of Disease Prevention and Control, which monitors health and disease in the region, “the capacity to detect and confirm cases… is considered to be sufficient to interrupt any possible local transmission of the disease early.”

Gatherer cited Nigeria as an example of how Ebola can be halted with swift and detailed action.

Despite being in West Africa and being home to one of the world’s most crowded, chaotic cities, Nigeria has managed to contain Ebola’s spread to a total of 20 cases and 8 deaths, and looks likely to be declared free of the virus in coming weeks.

“People aren’t living in very crowded conditions [in Europe], so the disease doesn’t have the same environment it has in a shanty town in Monrovia, where the environment is perfect for it to spread. It’s a different matter in modern western cities with the very sanitized, sterile lives that we live.”

The Ebola epidemic, the worst since the disease was discovered in 1976, has killed some 2,100 people in Guinea, Sierra Leone, Liberia and Nigeria and has also spread to Senegal.

The WHO believes it will take six to nine months to contain and may infect up to 20,000 people. In Liberia, the disease has already killed 1,089 people - more than half of all deaths reported since March in this regional epidemic.

F14 of Liberia's 15 counties have reported confirmed cases. As soon as a new Ebola treatment centre is opened, it is immediately swamped with patients.

Sierra Leone ordered a four-day countrywide "lockdown" starting 18 September as part of tougher efforts to halt the spread of Ebola.