SDGs: A tough sell to the broader public 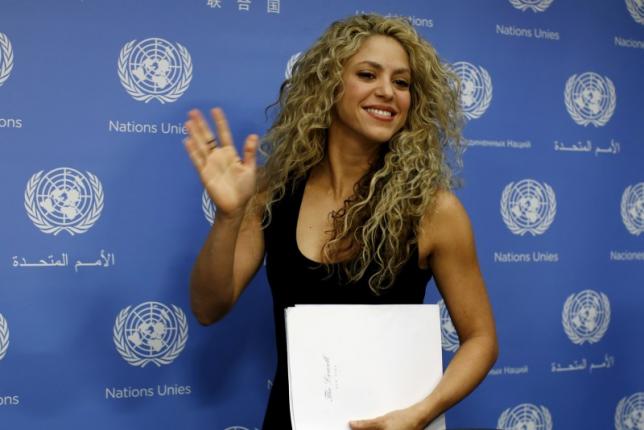 Colombian singer and UNICEF Goodwill Ambassador Shakira appears at a news conference at the UN. [Reuters]

On Friday (25 September), nearly 200 nations are due to adopt the 17 SDGs, a set of 15-year objectives to end poverty, combat inequality, protect human rights, promote gender equality, and create conditions for sustainable growth and shared peace and prosperity.

The summit of the world’s heads of state and government kicks off with an address by Pope Francis, who will followed by Colombian singer Shakira performing the song “Imagine”.

The obvious difficulties of reaching such weighty goals aside, the more immediate task is getting them noticed and recognized by the public, the media and the citizens of the 193 UN member nations about to ink a commitment, officials say.

Inside the United Nations, hallways and offices hum with preparations for this week’s meeting of nearly 200 nations to adopt a set of global goals aimed at tackling a range of ills from poverty to climate change over the next 15 years.

On the sidewalk outside the famed UN building on Manhattan’s East Side, a mention of the 17 lofty Sustainable Developments Goals, referred to widely as the SDGs, has far less resonance.

“SDGs? You’ll have to tell me what that stands for,” said Victoria Dillon, a tourist from West Virginia, exchanging blank looks with her daughter.

>>Read: Annick Girardin: ‘The SDGs can solve the causes of the migrant crisis’

“I’m absolutely all for those kinds of things, but I didn’t know there was a succinct set,” said the retired school principal.

On a public tour of the United Nations, visitor Leslie Kidd of Florida said she had seen no mention of SDGs in the media.

“It would be nice to have an announcement of some sort,” she suggested.

Problem with the initials?

Selling the media on the SDGs has been a tough task despite a vigorous publicity campaign by supporters, using radio spots, social media advertisements and celebrity events.

One veteran reporter recently complained at a UN news conference that one problem was that the initials sounded uncomfortably similar to STDs, or Sexually Transmitted Diseases. Perhaps to alleviate that issue, the SDGs are being referred to more often as #globalgoals on Twitter.

It’s up to the media to make an effort to publicize the goals’ importance and make them interesting to readers and viewers, said Amina Mohammed, UN special advisor to the Secretary-General on post-2015 development planning.

“It’s not being handed to you on a platter,” she told the Thomson Reuters Foundation in an interview.

Looking ahead to the summit, Helen Clark, administrator of the United Nations Development Programme, said the three-day meeting is an opportunity “to give the global goals a really good launch, to get them talked about globally”.

“We know headlines are buried in crises and human tragedy and disaster at the moment,” said Clark, a former New Zealand prime minister, told the Thomson Reuters Foundation.

The task then is to get the goals with a total of 169 targets incorporated into programs, policies and parliaments.

“These goals will or won’t happen depending on whether governments decide to take them seriously,” she said.

While they aren’t mandatory, Clark pointed out, there is nevertheless a carrot-and-stick approach to getting them accomplished.

“The carrot is a happy and harmonious society,” she commented. “The only stick is shame.”

The idea of the SDGs has been under discussion and debate since 2012. Since then, a working group representing 70 countries drafted a proposed set of goals and the United Nations has held consultations around the world to collect input.

They replace the Millennium Development Goals that were adopted in 2000 and expire this year.

The United Nations says the SDGs go much further by addressing the root causes of such issues as poverty and by looking at means as well as ends and that they are intended to be universal, rather than applied only to the developing world.