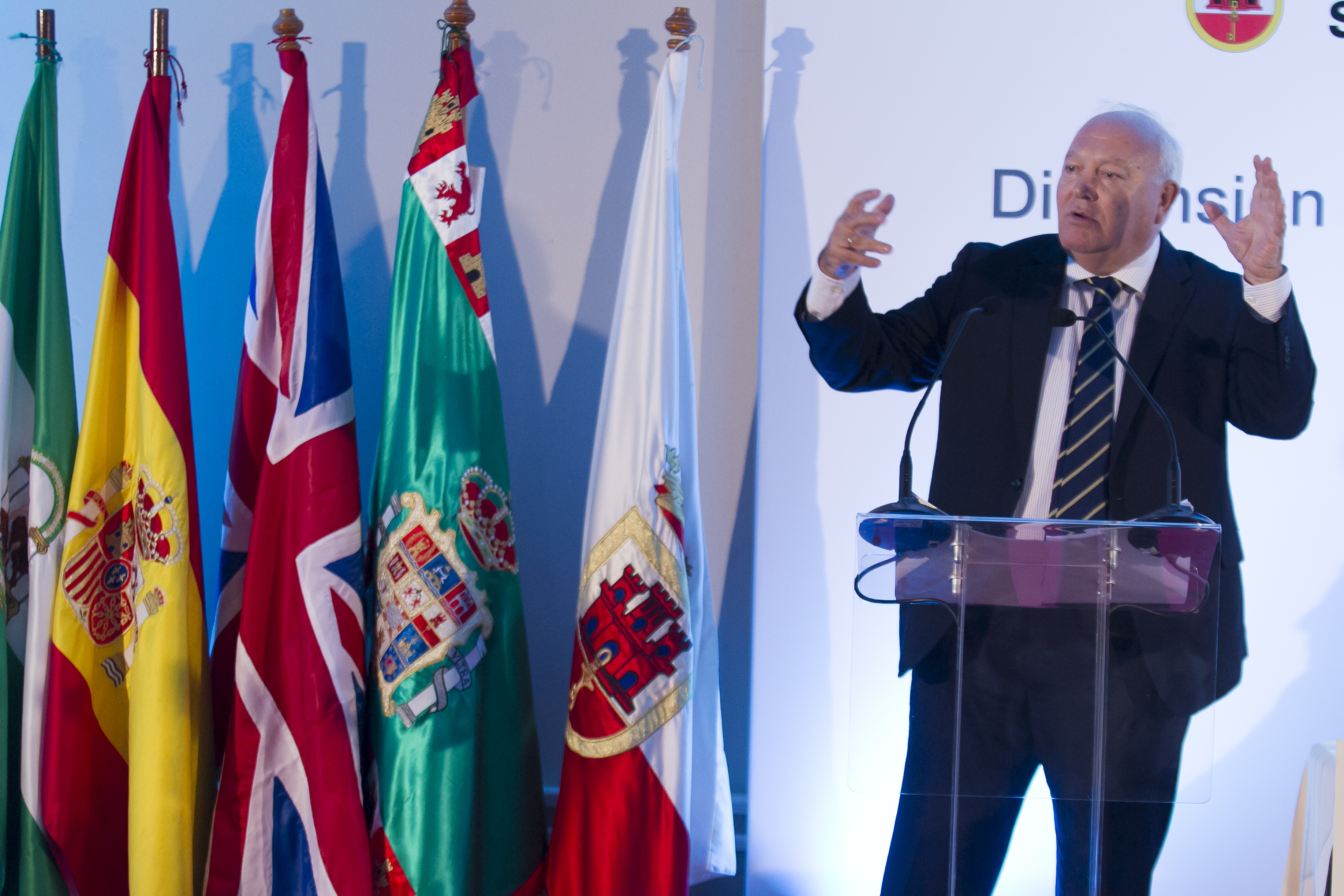 Miguel Ángel Moratinos, president of REDS, believes that these kind of meetings will be crucial in achieving the SDGs. [InfoGibraltar/Flickr]

The Tuesday (24 November) meeting, a somewhat unprecedented gathering organised by the Spanish Network of Sustainable Development (REDS), saw the participants presenting their positions on development aid volume, the consistency of national policies, and the framework that is in place to ensure Spain achieves its goals.

“Now comes the most important part: implementation,” said Miguel Ángel Moratinos, president and founder of REDS. To achieve this, the network, led by the former Minister of Foreign Affairs, has drawn up a manifesto that calls upon the political parties to formulate and promote policies that deal with sustainable development and development aid.

The main challenge facing our society is inequality. If we don’t attack the root of the problem, our production and consumption patterns, then we’ll only end up treating the symptoms,” said Pablo Bustinduy of Podemos.

In real terms, Podemos announced that they would increase development aid to 0.7% of GDP and create government posts dedicated to the issue of development. The latter pledge is one shared by the Spanish Socialist Workers’ Party (PSOE), which announced on 13 November the creation of a Vice-President of Sustainability.

Juantxo López de Uralde of Equo, meanwhile, warned about the consequences of global warming, climate change and the irreversible process of depleting the planet’s resources. “Governments are not capable of dealing with the large corporations that are behind this problem. Citizens have started to wake up to this, with a desire to regain control and their democracies. I believe that this will be crucial to meeting the SDGs.”

The Dieselgate scandal is perhaps the most pertinent example of this. A member of the audience, during a round of questions and comments, said, “I don’t see anyone being jailed for this.” Uralde, who is in favour of amending the constitution to include development aid, added that, “We have to regain control. This infinite growth model based on finite resources is completely unsustainable.”

Making aid a constitutional matter is one of the proposals drawn up by REDS in its manifesto. “We are all in agreement with the adoption of the SDGs. The logical step is to agree on this,” said Ciudadanos‘ representative Antonio Pezzi, a Senate candidate for Madrid.

However, he did not agree that it was “right” to include a specific number for development aid in the constitution. “Why 0.7% and not 0.5%? It surely depends on what is necessary at the time,” Pezzi added. The current ruling party’s representative, Gonzalo Robles (PP), was also against putting a figure in the supreme law of Spain. “Why not constitutionalise health funding as well? We agree on 0.7%. But in the constitution?”

Julio Lleonart of the Union, Progress and Democracy party (UPyD) while also against a “rigid” amount of aid in the constitution, made it clear that “0.7% must be the minimum amount. Austerity is no excuse and cannot get in the way of the development goals. Solidarity cannot depend on the economic situation.”

Soraya Rodríguez (PSOE) defended her call to constitutionalise development aid in response to the arguments put forward by the PP and Ciudadanos. “Not everything that is enshrined in law is more effective, but if it is, then it has more chance of working,” she argued. “It is unacceptable that Spain, in just four short years, has fallen back to the levels of aid that were seen in 1996.”

Mariano Pérez Bravo (Popular Unity) also denounced the cuts, which stand at almost 70% since the beginning of the crisis. “The 0.7% figure has to be the minimum, but it is worrying that Spanish ODA has fallen by a third in the last four years,” he said.

The agenda of 17 SDGs contains no less than 169 goals. However, there is a certain amount of consensus that the fight against inequality, both economic and gender, will be focused on developing countries.

“On a global scale, the wealth of the 20 richest families in the world is the same as the wealth of the billion poorest people,” said Bustinduy. “We endorse the creation of an international tax agency,” he added. Such an authority would be able to deal with sovereign debt issues and ensure corporations respect human rights.

We must overcome this habit of prioritising economic growth over the fight against inequality, where the attitude has been that the former leads to the latter. It is the same with sustainability and the environment,” explained Rodríguez.

“In the last MDG report of 2014, the issue of inequality and how it has increased was highlighted. The top 1% have the same amount of wealth as the bottom 99%. That is an obscene statistic and a situation that cannot be allowed to continue,” said Pérez Bravo. He also expressed his concern about the rise in self-employment in Spain. “This is normally associated with poverty,” he added. “Every country has pockets of poverty and we have to address them,” said Robles, of the PP.

On the issue of climate change and sustainable development, the seven parties showed a great deal of agreement. We are at tipping point and action is needed now and both Pérez Bravo and Uradle expressed their anger that there is still unwillingness to curb CO2 emissions.

Two huge issues were discussed at the meeting: TTIP and the VW dieselgate scandal. Uralde, Pérez Bravo and Miguel Ángel Vázquez, of the PUM+J, argued that TTIP is incompatible with the SDGs, while Soraya Rodríguez highlighted its benefits In terms of the planned free trade agreement, the founder of Equo said that, “We, the people, are giving up our capacity for political action in favour of large corporations.”

The former Secretary of State for Climate Change and Co-President of the advisory board, Teresa Ribera, and Moratinos closed the meeting by saying that “one of the objectives of the Spanish Network of Sustainable Development is to precisely have these kind of debates in order to find answers to the most pertinent questions”.