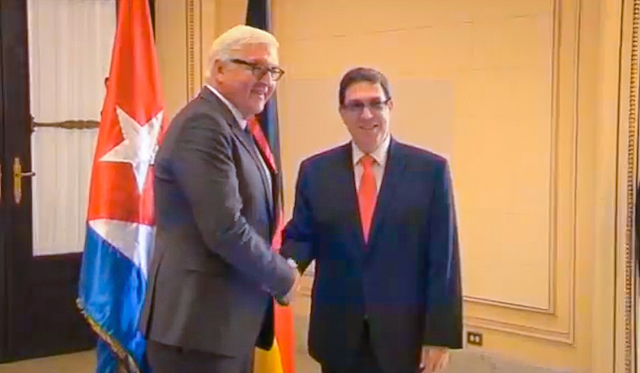 The visit comes days before the scheduled reopening of the US and Cuban embassies next Monday in Havana and Washington, ending nearly 50 years of hostility, and is expected to revive bilateral ties between Germany and the Communist-run island state.

During the meeting, Castro and Steinmeier discussed the ‘large potential’ of bilateral relations, especially in the economic and commercial fields, and other international issues of interest to both.

A joint declaration on cooperation between the two governments and a Memorandum of Understanding on the Establishment of a Political Consultation Mechanism was also signed.

The leaders agreed, during the second half of the year, to definitively negotiate the cultural agreement and conditions under which Germany could establish a trade office on the island.

“It’s a historic moment we’re experiencing now,” said Steinmeier, who also emphasized the “process of transformation” begun by Cuba is going “in the right direction”.

Shortly before traveling to the Caribbean country, the German foreign minister said in a statement, “Cuba and the world are approaching, after a long period of separation by a wall of distrust” and with this visit “we want to contribute to further open the door between Cuba and the world”.

A small delegation of business executives travelled to Havana with Steinmeier, to explore commercial interests.

On the first day of his visit, Steinmeier also met Cuba’s Vice President and Minister of Economy and Planification,  to discuss cooperation in renewable energy, environment, agriculture and other sectors.

The last visit by a representative of the federal government of Germany to Cuba goes back 14 years, during the coalition government led by Chancellor Gerhard Schröder.