By Rajeev Syal | The Guardian

The UK’s National Audit Office says the number of fraud investigations has increased in tandem with more public money being delivered to “fragile” countries where bribery can be seen as “cultural norm”. EURACTIV’s media partner The Guardian reports.

Fraud investigations involving foreign aid have quadrupled over five years as more public money is given to “fragile” countries, a UK government spending watchdog has found.

Reforms introduced by David Cameron to increase funding and assign it to unstable nations have increased the risk of wrongdoing, according to the National Audit Office.

In a report released yesterday (8 February), the NAO said it was “particularly challenging” to detect fraud in more than half of the spending of the Department for International Development (DfID) spend because the money was routed through other international organisations, such as the United Nations or World Bank.

Financial crimes in UN organisations are believed to be under-reported and the problem could be “significant and endemic”, the report said. Auditors also outlined the difficulties facing officials when operating in countries where bribery can be seen as a “cultural norm”.

Under Cameron, the government committed to spending 0.7% of national income on international aid, which came to around £12 billion last year. As part of the 2015 Strategic Defence and Security Review, DfID was ordered to spend at least half of its money on “fragile states and regions” until 2020.

At least half of the UK’s £12 billion (€17 billion) aid budget will be spent on supporting fragile and failing states, Prime Minister David Cameron has said ahead of the spending review in a major foreign policy speech at the lord mayor’s banquet.

This was seen as a significant shift among the aid community, which was worried that the UK government was raiding the aid budget to bolster defence and security.

In strongly worded conclusions, auditors said the reforms may well have increased the risk of fraud in DfID’s £9.7 billion budget. The department’s fraud caseload quadrupled between 2010/11 and 2015/16 to 429, the report revealed.

Most of the increase related to “lower priority” allegations while the most serious cases remained steady, between 20 and 25 incidents a year. The largest number of the top priority investigations involved allegations in Afghanistan, Somalia, Syria and the Democratic Republic of Congo.

The NAO said the increase in the number of allegations being dealt with by DfID was going up as a result of its work to increase awareness of fraud. But the department has “significantly” reduced the way it publicly reports fraud in its annual report and accounts.

The Foreign Office has also seen a “significant increase” in its fraud caseload, with 50 allegations last year, twice as many as 2011. Around three quarters of the cases involved staff making claims for travel and subsistence or procurement.

Auditors acknowledged that the delivery of aid in developing countries means operating in places where fraudulent practices are the norm. “Britain delivers aid to many countries that operate with significantly different cultural- and economic-value systems,” the report said.

“Some societies operate within cultural norms that expect bribes to be paid to officials for access to services, including justice; where family members will be preferred to open competition when allocating work contracts; and where senior officials take a percentage of the salaries of junior staff members.”

Priti Patel, the international development secretary, said the rise in the number of inquiries has coincided with a more rigorous approach to fraud over the past three years.

“We expect all international agencies to have the same zero-tolerance approach to fraud that we have if they are to receive taxpayer money.” 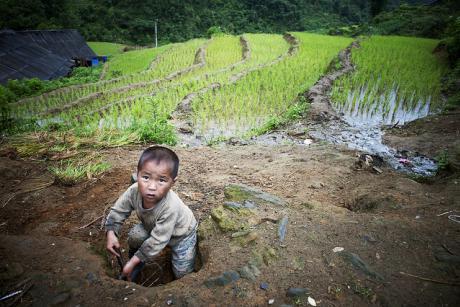 Nearly 1.5 billion people live in countries riddled with conflict, fragility and violence, and which have also shown the least progress on achieving development goals, according to a new OECD study. EURACTIV Germany reports.