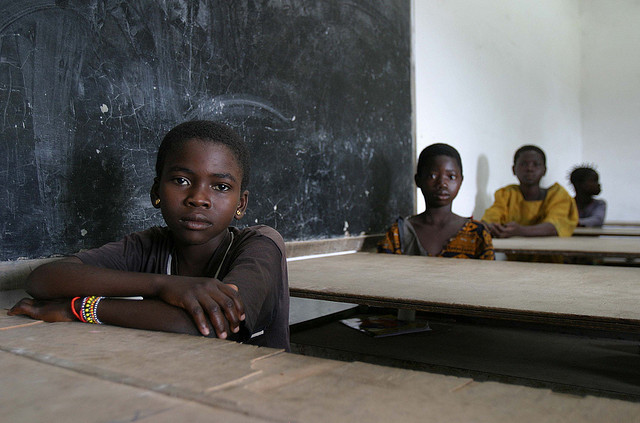 Education in schools like this one in Chad is vital to ensure Africa's long term economic success. [Pierre Holtz/OCHA/Flickr]

Ensuring Africa’s long term economic success is not only a matter of increasing literacy and university enrollment rates; it also demands an education system that prepares workers to meet the demands of the region’s fast-changing labour market, writes Viswanathan Shankar.

Viswanathan Shankar is group executive director and CEO for Europe, the Middle East, Africa, and the Americas at Standard Chartered Bank.

United Nations Secretary-General Ban Ki-moon has called education the “single best investment” that countries can make to build “prosperous, healthy, and equitable societies.” Nowhere is this insight more relevant than in Africa, where large-scale investment in education has enabled significant gains in literacy, school attendance, and university enrollment in recent years. But the continent still has a long way to go.

According to UNICEF, Sub-Saharan Africa is home to more than half of the 58 million children worldwide who are not in school, particularly girls and young women. More than one in five Africans aged 15-24 is unemployed, only one-third have completed primary school, and, despite some progress, the rate of higher education remains low.

The fact that many social indicators are stagnant or declining is particularly disappointing, given that Africa is home to many of the world’s fastest-growing economies. According to a recent United Nations report, the number of Africans living in extreme poverty increased by almost 40%, to 414 million, from 1990 to 2010. Four out of five deaths of children under the age of five occur in Africa.

Nonetheless, there is reason for hope. Over the next few decades, Africa is expected to record the fastest growth in the number of wealthy individuals. And two recent studies commissioned by Standard Chartered Bank indicate that the growing ranks of the affluent view education as a top priority.

In the first study, most of the middle-income individuals surveyed in Nigeria, Ghana, and Kenya plan to spend more on their children’s education in the next five years, even though up to 20% of them had minimal education themselves. A Chinese proverb says that all parents want their sons to be dragons and daughters to be phoenixes. African parents are no different.

The second study showed that high-net-worth African business owners accorded education the highest priority in their charitable activities, with more than 90% already engaging in education-related philanthropy. In Nigeria, where there are 150 private jets but only four registered philanthropies, Aliko Dangote, Africa’s wealthiest individual, has donated close to $200 million to educational causes in the last two years.

Other homegrown philanthropists, such as Strive Masiyiwa and Nicky Oppenheimer, have also made significant contributions. These benefactors, together with private enterprises and the public sector, will be essential to ensuring that all young Africans – not just those from wealthy families – gain access to quality education.

But more than money is needed. People must go beyond writing checks to charities and contribute actively to building schools, funding scholarships, and training teachers. Fortunately, this, too, is already beginning to occur.

For example, Standard Chartered, in partnership with the Varkey GEMS Foundation, is funding the training of school teachers in Uganda, based on the belief that higher-quality teaching will lead to better learning outcomes. And the MasterCard Foundation is providing disadvantaged African students with financial assistance to attend secondary schools and university.

All of these actors know that the kind of stable, inclusive growth that an educated workforce underpins will bring them untold benefits. But ensuring long-term economic success is not only a matter of increasing literacy and university-enrollment rates; it also demands an education system that prepares workers to meet the demands of the region’s fast-changing labour market.

This means, first and foremost, ensuring that people gain practical skills that can drive economic development in the decades ahead. It is more important to have a large number of workers capable of making widgets, designing textiles, administering health care, and splitting enzymes than to have a plethora of history or literature graduates. It also means that, following the examples of Singapore and Germany, clear pathways linking education to employment must be created.

Dangote has described how thousands of college graduates applied for a handful of truck-driving vacancies in his factory. This experience motivated him to establish his Dangote Academy, a centre for talent development that aims to help fill the industrial-skills gap in Nigeria and beyond. Such initiatives are crucial to aligning education with economic development and enhanced prosperity.

By 2040, Africa will have 1.1 billion working-age citizens – more than either India or China. With the right education, skills, and job opportunities, this immense workforce could deliver rapid and sustainable economic growth for the entire region. Without them, the continent is more likely to experience rising unemployment, widening inequality, social disorder, and, ultimately, conflict and chaos.