By Gordon Brown | In partnership with The Guardian 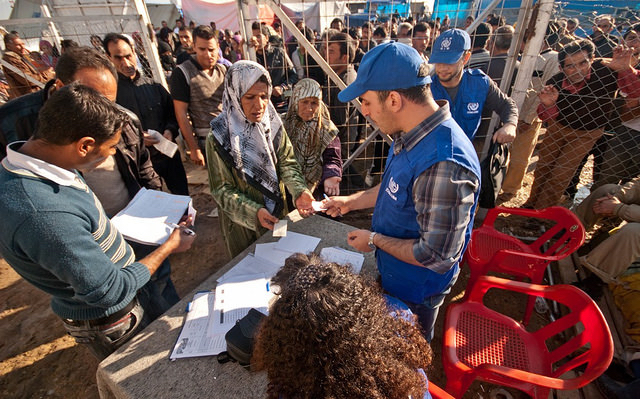 If the tiny, lifeless body of Alan Kurdi, the three-year-old boy whose body washed on to a beach in Turkey, has finally shamed Europe into offering sanctuary to Syrian refugees, just what will it take to shock the entire world into dealing with a problem 100 times bigger?

While the European Commission still struggles to find agreement on a quota of 40,000 refugees, there are 4 million Syrians holed up in Jordan, Turkey and Lebanon desperate for food, shelter, healthcare and schooling for their children.

The 1.1 million Syrians now in Lebanon have increased the country’s 4.5 million-strong population by one quarter. It is the equivalent of 16 million refugees descending on Britain’s shores or 80 million crossing the border into the United States. The impact of that in either country would be almost unthinkable.

“Why have you abandoned us?” a Syrian refugee girl desperate to go to school challenged me when I recently visited a Beirut refugee centre, where hundreds of mothers and their children were crowded into one room.

There I met 10-year-olds working in factories for wages that cover only a roof over their heads, girls who had been living on the streets at risk of being trafficked, and girls of 12, 13 and 14 who feared being forced into early marriage.

Most families were living in shacks, and many looked as if they were going without basic nutrition. Their healthcare needs were barely being met. But for the mothers, some three and four years into their exile, their critical and repeated question was: “How can my children get an education?”

No government should truly be asked to absorb what has been forced on an already troubled and divided Lebanon, but to his country’s great credit the Lebanese education minister wants to offer a school place to every single refugee child.

The plan is quite simple and involves operating double shifts in their schools, which is possible because the refugees are spread right across the country. In the morning and early afternoon, Lebanese children will be taught in French and English. In the afternoon and early evening, in the same classroom, Syrian children are taught in Arabic.

What is missing is not the classrooms or the trained teachers but the money to pay for them. For $500 a year, or $10 a child each week, we can provide school places that would allow parents and children to do what they would prefer to do – to stay in the region.

And so, while the crisis may seem overwhelming, we need not be overwhelmed; and in reply to those who ask, “What can we do?” we can point to a detailed plan, to be unveiled at the UN later this month, which starts by taking 1 million child refugees off the streets. I will ask the international community to build on the $100m we have already raised with another $250m immediately.

Over the past few days, I have consulted King Abdullah of Jordan, the Lebanese and Turkish governments and Tony Lake of Unicef. In the next few days, at the invitation of the Lebanese government, I will visit Beirut again.

To its credit, the UK government has already given £20m to this plan. But it runs counter to its, and Europe’s, interests to cut the international aid budget in this troubled region as Britain tries to cover the new costs of refugee support within the UK. Instead we should be increasing it, so that parents don’t think the only chance of a future for their families is sailing out in flimsy boats on death voyages but are assured there is support much closer to home.

We have to provide both a home for refugees here and help for the millions struggling for survival on Syria’s borders. And cutting international development aid to the region would be counterproductive. It would not solve the problem but exacerbate it, forcing more to leave; and it would cost more.

Eglantyne Jebb, who started Save the Children to help child refugees after the first world war, said the only international language the world understands is the cry of a child. But from her own experience of visiting neglected orphans, the author JK Rowling feared that: “No one is easier to silence than a child.”

In the next few weeks we will find out whether, instead of becoming the lost generation, millions of children will finally be heard.