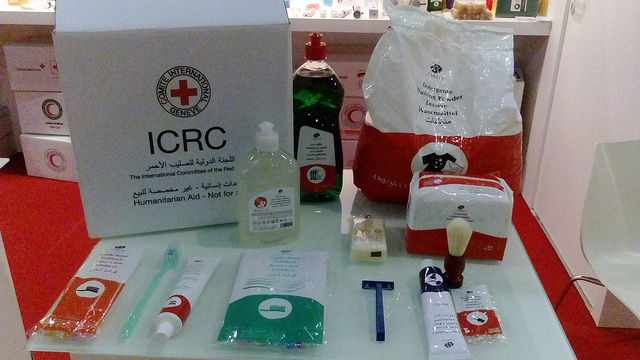 International Committee of the Red Cross/Crescent on display at the Aidex 2015 conference. Brussels, November 2015. [MattTempest/Flickr]

What are the best and most effective ways for international NGOs (non-government organisations) to partner with local organisations in conflict zones? Ensuring trust, writes Kimberly Howe.

Kimberly Howe, PhD Senior Researcher at the Feinstein International Center at Tufts University, has interviewed some 60 donors, international NGOs and Syrian organisations involved in cross-border operations from Turkey into northern Syria. She spoke at this week’s AidEx 2015 conference in Brussels.

To answer this question, my colleague Liz Stites, Danya Chudacoff and I then took a sub-sample of five Syrian organisations and together with their international partners, studied them over a period of a year. While each side of the pair knew the other was being studied, no information was shared.

The result was that we learned something about partnerships – what the ingredients are of some successful partnerships – in the very difficult context of Syria’s civil war.

A couple of quick things about the Syrian context that affects partnerships:

Syria has largely become what is known in the aid/development world as a “Remote Management Setting” – which means situations where humanitarian access for international organisations is severely limited due to insecurity (as in the case of Syria, Somalia and parts of Afghanistan) or where there is a lack of permission of government where the crisis is taking place (also the case in Syria, and Sudan in the past).

What this means is that partnership becomes the only method, as opposed to one method, among many for humanitarian operations.

And certain tensions arise from this reality. Firstly, the direct monitoring and evaluations (M&E) of programs, projects, and general operations is almost impossible. Despite this lack of direct oversight, the international organisation remains responsible for the operations of their local partners vis a vis their donors, for example the US government, the UK government, the EU Commission’s Humanitarian Aid and Civil Protection etc, but in a context in which they cannot see.

Secondly, the risk is predominantly born by the local organisations.

Shifting to a remote management model only improves the safety for the international organisation – but local actors are the primary targets of violence in humanitarian situations.

Some of the successful ingredients of local-international partnerships are:

This includes their institutional experience with partnerships (are partnerships part of the genetic makeup of the organisation? Is there buy-in from the top levels downward?); what is the stability of the international organisation in the context (one international NGO we studied saw six different country directors in one year); do they have sufficient resources to support a partnership? And what are their donors’ tolerance for risk? Will their donors be willing to be flexible, and not expect “business is as usual”?

Partnerships take time – and this is not always a welcome fact in an emergency response.

Many international organisations and donors have asked me for “the magic check-list” that will tell them who is going to be a good partner. I said “Throw away the check lists…”

Trust was found to be a necessary (although not sufficient) ingredient for successful partnerships. For local organisations: trust is often the glue or currency that held all aspects of their operations together – from hiring to procurement to access to reporting. When a local organisation does not feel that they have trust in the partnership, it undermines their work: For instance, some local organisations said that they did not fully report the extent of the security problems or issues they faced in operations because they feared their funding would be cut. This meant that we saw, for example, Syrians needing pay smugglers to get their staff across borders to provide international partners with beneficiary lists. Others feared local retaliation when an international partner required their logo on distributed goods (“branding” that showed a connection with a religion, or the West). Without trust, Syrians did not speak about the dangers that these donor requirements posed for them. However, international organisations also told us that they wanted local partners to be more honest with them. (It should be noted that the same fears expressed by local organisations toward their international NGO partners were nearly identical to those expressed by international NGOs toward their government donors—showing a breakdown in trust all along the partnership chain.

So part of our work as researchers was to figure out what built and what eroded trust for both sides of the partnership. For Syrian organisations, this included face to face meetings, regular and institutionalized fora for reviewing the partnership process with multiple staff, and engaging in joint problem solving rather than receiving top down directives. Engaging in joint agenda setting was also seen as an important trust or confidence builder between local and international organisations.

If we can identify components of successful partnerships in a situation where tensions are enormous, such as in the case of Syria, where you have an imbalance in power (where one side has all the money and the other has all the access… and where one side faces the life risk of working in a an extremely violent situation with little protective resources, and the other side risks criminal prosecution for violating counter terror legislation), then these components are likely to be informative for a range of complex partnerships and collaborative relationships.