When world leaders meet in September to adopt a set of Sustainable Development Goals, the Bill and Melinda Gates Foundation will make a strong case that health goals should be a top priority, writes Bill Gates.

Bill Gates is an American business magnate, philanthropist, investor, computer programmer, and inventor. In 1994, Gates and his wife established the William H. Gates Foundation which was dedicated to supporting education, world health, and investment in low-income communities. In 2000, the couple combined several family foundations to form the Bill and Melinda Gates Foundation.

Life requires us to make choices. It is as true in philanthropy as anywhere else: Many good causes deserve attention, but if you try to work on all of them, you will end up having less impact. That’s why Melinda and I have picked a few areas for our foundation to focus on. Even within those areas, we set priorities and devote more time and money to some things than to others.

In the coming months, world leaders will have to make similar choices. In September they will get together at the United Nations in New York to adopt a set of Sustainable Development Goals, which will help define the global development agenda for the next 15 years. Proposed goals cover everything from health to climate change and the oceans. Once the final goals are adopted, leaders will have to prioritize them and figure out how to allocate funding and effort among them.

Our foundation will be making a strong case that the health goals should be a top priority.

Why? Because when it comes to saving and improving lives, investing in health provides an amazing return—the best I have ever seen.

Consider what the world has already accomplished. Since 1990, we have cut in half the percentage of children who die before the age of 5 (from roughly 10 percent to 5 percent). I am optimistic that we can cut it in half again by 2030. That would prevent the deaths of at least 61 million children: 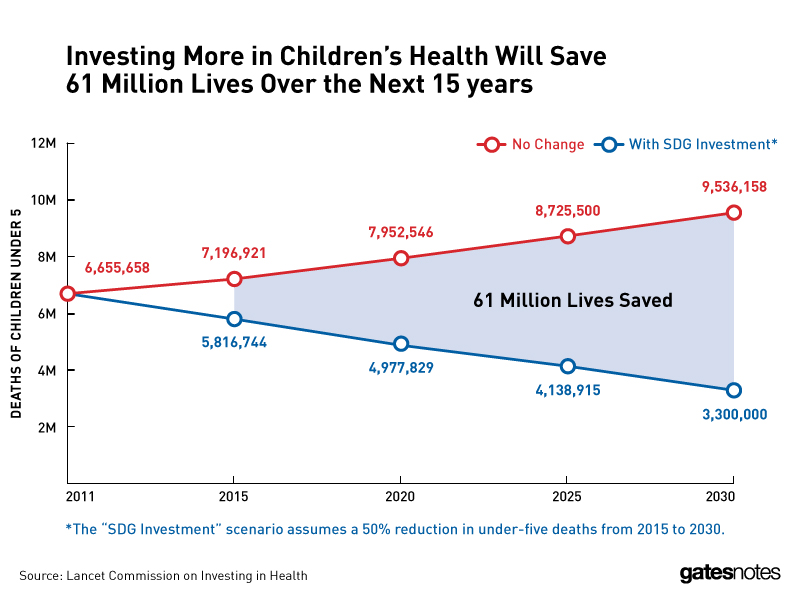 A group led by former U.S. Treasury Secretary Lawrence Summers (and co-funded by the Gates Foundation) studied the potential impact. In a report published in The Lancet medical journal, they found that if we make a few focused investments now, we can largely eliminate the gap in child mortality between rich and poor countries. When I dream about achieving health equity around the world, that’s what I see.

What will it take to deliver these results?

For one thing, we need good targets to aim for. The United Nations did a great job of this in 2000 with the Millennium Development Goals, which set ambitious numeric targets. We could see which countries were falling behind and which ones were speeding ahead, and that made it much easier to find and spread best practices. The new goals adopted this year will need to take this same approach if we’re going to finish the job begun by the MDGs.

Another key step is to account for the changing dynamics of foreign aid. Rich, middle-income, and poor countries all share responsibility for saving lives, but the share will look quite different a decade from now. Economic growth in many developing countries means they will rely less on aid and will cover more of the cost of providing care for their people.

How much more? The Lancet report calculated the price tag for achieving the results I mentioned above. It found that by 2030, very poor and moderately poor countries will need to be spending about 3% of their GDP on health, up from an average of less than 2% today. A budget increase of that size won’t happen overnight, of course. It is a tough challenge and will take strong political leadership in those countries, but I think it is possible.

The report also found that in the near term, the 34 richest nations will need to expand their efforts, especially funding for research on new vaccines and other lifesaving tools. Ideally, they would double their health aid. Realistically, this will be hard at a time when budgets are tight. Some mix of expanding the total amount of aid and increasing the share that goes to high-impact health programs would make a big difference.

To build support for health aid, we need to show political leaders how it not only saves lives but puts people on the path to self-sufficiency. As more countries join the global middle class—a transition made possible in part by healthier, more productive workers—fewer will need outside funding. In fact the Lancet report found that over time, developing countries will be able to cover roughly 75% of the total increase in health spending.

One challenge with this transition is that some countries will soon be too rich to qualify for the most favorable forms of aid, but they will still be home to many people in extreme poverty—and may not have enough money to cover the gap on their own. For example India, Pakistan, Nigeria, and Vietnam could all face this problem. So we will need to focus less on aid to poor countries and more on aid to poor people, no matter where they live.

There is no getting around the fact that, between increasing domestic spending and expanding aid, we are talking about a lot of money for health. But the benefits will far outweigh the costs—by a factor of 9 in very poor countries, according to the Lancet report, and by a factor of 20 in moderately poor ones.

If someone told me they had a better idea for improving the world, I would ask: “Can you beat a nine-fold return on investment, saving more than 61 million children and 3 million mothers, and preventing 21 million deaths from AIDS and 10 million from TB? Frankly, I doubt it. But if you can, I would love to see your plan.”

Global health is a fantastic investment. It should be a top priority on the world’s agenda. Figuring out how to deliver on the Sustainable Development Goals will require many tough decisions, but this is not one of them.