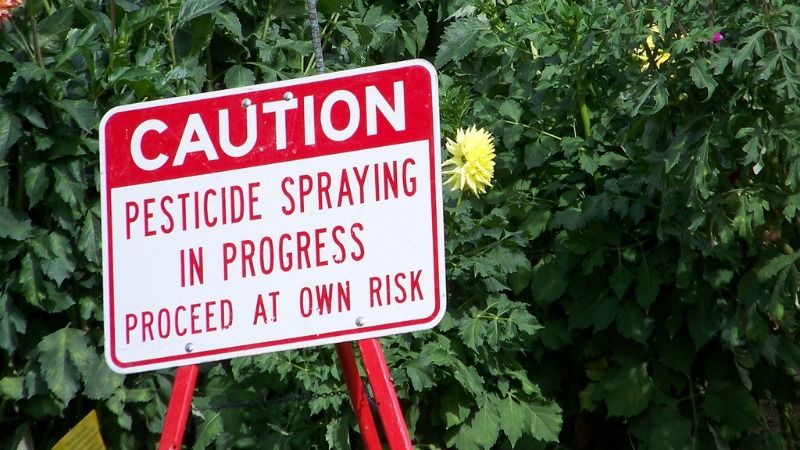 A Danish study on children whose mothers work in greenhouses established that the greater part of exposure to pesticides occurs during the first 8 weeks of pregnancy. [jetsandzeppelins/Flickr]

Laurent Vogel is a researcher at the European Trade Union Institute (ETUI).

The Dutch Presidency of the European Union in the first half of 2016 oversaw a much overdue revision of the Directive on the protection of workers against risks from exposure to carcinogens.

It was high time. In 15 years, the European Commission made little progress on an issue vital to reducing social and health inequalities in Europe. With 100,000 deaths a year, cancers caused by occupational exposure represent the first cause of mortality related to working conditions in Europe.

On 28 February 2017, the Social Affairs Committee of the European Parliament voted various amendments on the basis of a report presented by Swedish MEP Marita Ulvskog. Lawmakers distanced themselves from the minimalist approach of the European Commission. If these amendments are confirmed during the following stages of the legislative procedure (plenary vote in April, negotiations between Parliament and the Council of Ministers after that vote), we are heading for a directive that will enable thousands of lives to be saved every year.

The report was approved by 38 votes in favour and 6 votes against. Only two parliamentary groups opposed it – the Eurosceptic right grouped around British and Polish conservatives and the far-right (France’s National Front). Convergence was achieved among all the other groups despite an intense campaign by industry in favour of the Commission’s minimalist approach.

A very important amendment aims at bringing substances toxic for reproduction within the scope of the directive. Millions of persons are exposed to such substances in Europe in many work-related activities whether they are male or female. We find them in sectors such as chemicals, the metallurgical industry, the building industry, farming (especially because of the use of pesticides) as well as in the services sector (cleaning, health, hairdressing and beauty care, in particular).

The consequences of using such substances are reduced fertility, miscarriages and congenital malformations. Such substances may also be the source of serious health problems among children (infantile cancers, development disorders, mental retardation, etc.).

In most European countries, there is no obligation for the employer to keep a register of exposure to toxic substances and registers of congenital malformations seldom provide information about the mother’s or father’s profession, which contributes to the social and political invisibility of the problem.

The most systematic research was conducted in Denmark. Children whose mothers work in greenhouses were monitored for a long period between 1997 and 2013. The study established that the greater part of exposure to pesticides occurs during the first 8 weeks of pregnancy because most women workers were entitled to be moved as a precautionary measure or to work at places not exposed to pesticides after that period.

The women workers had been exposed to a hundred or so pesticides authorised on the basis of European legislation. The organisation of prevention was considered as conforming to the rules in force. Among young boys, several health problems affecting reproductive health were observed: cryptorchidism (the absence of one or both testes from the scrotum), smaller sized testicles and penises, and the disruption of the production of reproductive hormones.

Among girls, the risk of precocious breast development was multiplied by three. For all children, an increased risk of low birth weight and excess adipose tissue development was observed. Neuropsychological disorders concerning language and motor activity were also observed in girls.

The rules are insufficient as far as workplace protection is concerned. Whereas carcinogenic and mutagenic substances are the subject of more stringent prevention requirements by employers, reprotoxic substances have the “advantage” of a more lenient framework. A lot is at stake: out of 235 substances identified as proven or suspected reprotoxic substances, over 160 evade the most stringent regulation because they are not also classified as carcinogenic or mutagenic. If we confine ourselves to production volumes, the inadequately controlled risks are considerable. They concern lead, bisphenol A (a massively produced endocrine disruptor) and several phthalates.

A directive concerning the protection of pregnant or breastfeeding workers does certainly exist. But reprotoxic disorders concern men as much as women. Limiting specific measures to pregnant women may lead to various forms of discrimination. Furthermore, reprotoxic substances usually act on sex cells (eggs and spermatozoids) or on the first stages of embryo development. Rules concerning pregnant or breastfeeding workers obviously do not make it possible to prevent harmful effects on fertility. European legislation triggers a specific preventive action only from the time when a woman worker has informed her employer that she is pregnant. Such information is seldom communicated before the tenth week of pregnancy. Now, the risks for foetal development arising from chemical substances are at their highest during the first three months. Legislative provisions are therefore fairly ineffective and are likely to have stigmatising effects on pregnant women.

The inclusion of reprotoxic substances in the field of application of preventive rules concerning carcinogens would oblige companies to implement preventive measures of the same standard for all substances of high concern. This reform has already been implemented in France, Germany, in the Czech Republic, in Austria and in Finland.

The European Commission followed a winding pathway on this matter. In 2002, the executive considered it necessary to extend the scope of the Directive to substances toxic for reproduction. This proposal was part of the “legislative package” submitted to social partners in April 2004.

Under the Barroso presidency, the proposal hardly made any progress. The position of the Commissioner for Social Affairs, Mrs Marianne Thyssen, did not progress in relation to the blockage by the previous Commission. According to a statement by the Commissioner to Chemical Watch in May 2016, the assessment of the impact of that proposal “did not sufficiently clarify the costs and the potential benefits”. In short, as long as the Commission had not assessed in euros the drama that miscarriages, congenital malformations and the other impacts of reprotoxic substances represent, it clearly intended to do nothing about it.

The widespread convergence achieved in the European Parliament offers an unprecedented opportunity that decision-makers should not let go. If followed through, it would result in a coherent approach in relation to all other sets of Community legislation. In fact, in all areas (REACH, pesticides, biocides, cosmetics, etc.), reprotoxic substances are subject to the same legal rules as carcinogens and mutagens.

EU legislation seems to consider reproductive health to be a marginal issue as far prevention in the workplace is concerned. Above all, it would show that the European Union can meet the basic health needs of its population.