There was a loud burst of cheering in the European Parliament’s Strasbourg plenary chamber as MEPs rejected last month’s decision by the Legal Affairs Committee (JURI) to approve the draft legislation. Legislators will now go back to the drawing board and can introduce new amendments before another vote in September.

A total of 318 MEPs voted to discard the JURI Committee’s decision and 278 elected to keep the legislation and move on to negotiations with the European Commission and national governments. There were 31 MEPs who abstained from the vote.

It took an uncommon show of political manoeuvering for the copyright file to land on Thursday’s voting agenda at all. Normally, the Parliament starts legal negotiations with the other two EU institutions based on the committee’s draft. But several dozen MEPs drew on the rarely-used Parliament rule number 69c to challenge the committee decision.

Now, the entire house of 751 MEPs will get involved and spend the summer drafting new amendments to the file. They will vote again in another plenary session in September, meaning that three-way negotiations on the file will be delayed.

It’s a major blow to the Commission, which has vowed to seal agreements on all outstanding technology bills by the end of this year. Negotiations on the contentious copyright overhaul can start in September at the earliest. But a quick agreement between the three institutions after that seems far off.

The Commission first proposed the legal overhaul in September 2016. 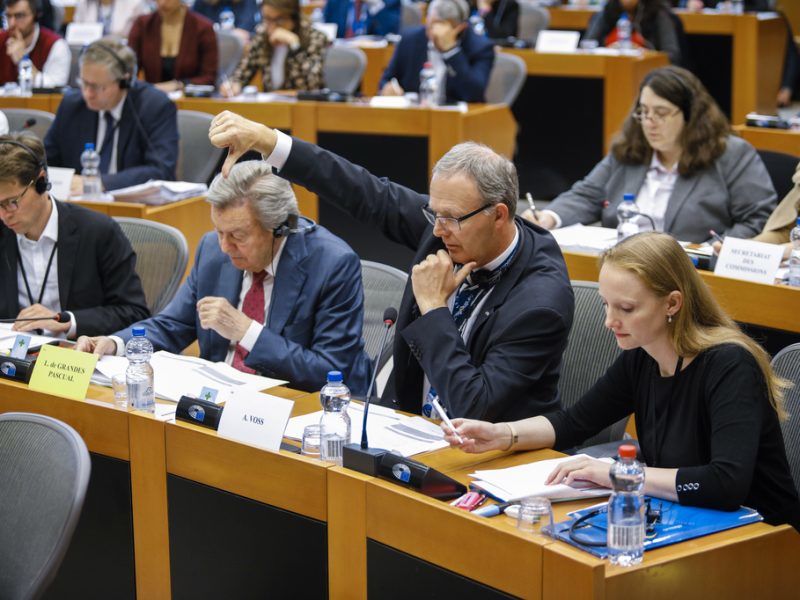 Axel Voss, the German centre-right MEP who authored the JURI committee’s version of the legislation, appeared flustered as the outcome was announced.

Before the vote, Voss addressed MEPs and urged them to vote in favour of proceeding with negotiations.

He said the bill would mark “the end of the exploitation of European artists on the internet.

“We’re talking about the major US platforms like Google and Facebook that have been making huge profits at the cost of European creatives. We need to prevent that,” Voss said.

One of the two most controversial measures in the legislation is article 13, which requires internet platforms to set up filters to detect copyright infringement. Civil liberties campaigners and internet companies argued that it would lead to platforms like Youtube censoring uploads and possibly removing an excessive amount of content that they find to be copyright infringement.

Much of the heated political debate also centred around article 11 of the legislation, which introduces a five-year-long publishers’ license for news snippets that are posted online. The measure would give publishers the ability to demand fees when internet companies show snippets of copyrighted news in online search results.

In the days leading up to the plenary decision, lobbyists in favour and against the copyright overhaul amped up their campaigning.

Beatles legend Sir Paul McCartney sent a letter to MEPs on Wednesday asking them to support the legislation because “music and culture matter”.

Earlier this week, a citizens’ petition against the copyright legislation gathered hundreds of thousands of signatures.

There was mud-slinging from both sides. Critics attempting to stop the negotiations claimed the bill would spell “the end of the internet”. Voss and four other MEPs in favour of the overhaul criticised their opponents’ “lies” and “fake news” during a press conference on Wednesday.

Julia Reda, the German Green MEP who has been the most outspoken critic of the draft legislation, said that “Rapporteur Mr Voss’ attempt to dismiss well-founded criticism as ‘fake news’ has failed”.

“Our protests have worked: The European Parliament is sending the copyright law back to the drawing board. Members have understood that the proposed upload filters and the ‘link tax’ would unduly limit how users can participate and express themselves online and serve only special interests,” she added.

Every political group in the Parliament was divided, with MEPs voting in favour and against the bill. September’s plenary vote is likely to be similarly close.

Lobbying campaigns are set to accelerate over July and August, when the Brussels policy agenda usually slows down as the Parliament and Commission head into recess.

Monique Goyens, director general of the European Consumer Organisation, said in a statement on Thursday that “MEPs have a chance to correct a heavily unbalanced report and make copyright work for both consumer and creators”.

Goyens calls the MEPs’ rejection of the JURI Committee bill “a big decision in the fight to prevent large-scale and systematic filtering of online content from becoming the norm”.

Supporters of the legislation were quick to voice their disappointment.

Anders Lassen, the president of GESAC, an association representing authors and composers, said “unfortunately manipulative campaigns orchestrated by tech giants based on scaremongering prevailed on this occasion”.

“We are confident that the European Parliament will finally approve what is right for the future of the EU’s economy, competitiveness and fundamental values against these global forces,” Lassen said.

More rifts have opened up in the European Parliament’s negotiations over a contentious copyright law overhaul after a new MEP stepped in to lead on talks.