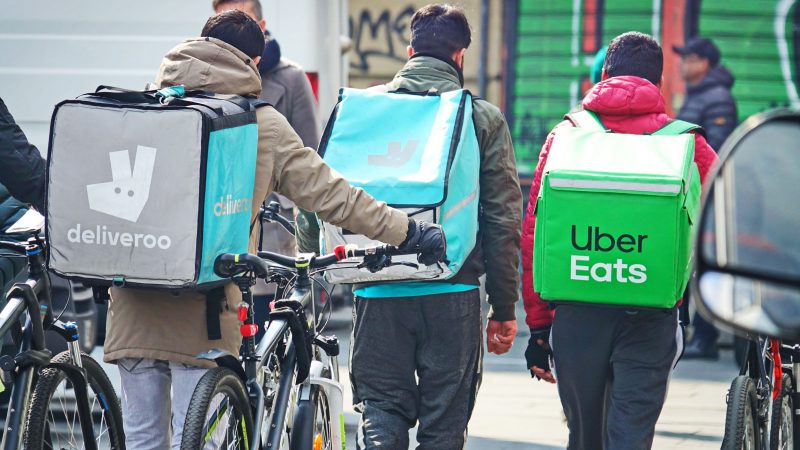 The gig economy has enabled cheaper services and flexible working arrangements, but it has also raised questions on the labour conditions of platform workers. [Shutterstock]

The own-initiative report, adopted on Thursday (16 September), addresses the “precariousness and poor working conditions” of the workers employed in the gig economy, which according to EU lawmakers should have the same rights and social protection as traditional employees.

While not binding legally, the report anticipates a legislative proposal that the European Commission is due to present by the end of the year.

“Better access to social protection, improved working conditions, access to collective representation for the self-employed, clarification of the status, and the use of ethical algorithmic management are all issues that urgently need to be addressed at European level,” said Sylvie Brunet, the MEP leading on the report.

Online platforms made services more affordable to consumers and opened new and more flexible working opportunities. At the same time, the gig economy has raised questions on the fair treatment of the labour force, notably for what concerns access to social protection and the right to collective bargaining.

Workers’ rights in the gig economy

The Parliament resolution states the principle that platform workers must receive minimum social protection, including compensation for accidents at work, sick leave, health and disability insurance coverage. These protections would apply regardless of the workers’ status, hence also the self-employed.

Provisions include safety requirements, reporting mechanisms for harassment and training to increase the employability of gig workers.

EU lawmakers consider that platform workers should be organised and allowed to bargain collectively. They urged the European Commission to clarify that collective agreements do not fall under the prohibition of EU competition law.

“We want to change the game of the gig economy. Platform workers are misclassified as self-employed and denied decent working conditions and social rights, like minimum wages or paid leave,” shadow rapporteur Elisabetta Gualmini told EURACTIV.

The legal status of the gig works is another sore point, which the resolution addresses by proposing a reversal of the burden of proof: it should be up to the employer to prove that there is no employment relationship.

“Not every platform worker is an employee. There are many self-employed people, some of them highly qualified, who want to remain so. These must not be affected by the new regulation,” commented MEP Dennis Radtke.

A study from 2018 suggests that most platform workers value flexibility and independence in working conditions.

“There isn’t a silver bullet solution, but there is a need for ambitious and creative policy solutions that do not destroy work and jobs at the worst time imaginable,” said Dominick Moxon-Tritsch, vice president at mobility company Bolt.

Similarly, Uber also rejected the conclusions of the Parliament’s report, saying the rebuttable presumption of employment relationship would be “harmful legislation”.

By contrast, Mihai Palimariciuc, a policy analyst at the European Policy Centre (EPC), considers that the proposal “could force platforms to choose whether their competitive advantage on the market results from technological innovation and carefully crafted algorithms or it comes from subverting social rights.”

Palimariciuc notes that most of the Parliament’s demands were already alluded to in the second consultation document the European Commission shared with the social partners, including the rebuttable presumption of the employment relationship.

“Much of the added value of this report comes in how it proposes to deal with issues of transparency, autonomy and algorithmic management,” Palimariciuc said.

The text takes stock of the unprecedented role algorithms have taken in managing the workforce and introduces provisions intended to make the use of this technology transparent, non-discriminatory, ethical and reliable.

“It is crucial to make algorithms more transparent towards workers and ensure human oversight over their decisions,” MEP Gualmini added.

The resolution introduces transparency obligations over the method of calculation on the price or fee, the assignment of tasks and ratings, and any eventual change to the terms. It also requires human supervision over algorithmic management so that workers can effectively challenge a decision.

MEPs also propose provisions that would better enable gig workers to work for several online platforms. In particular, the requirements on the interoperability of ratings would ensure the portability of profile data from one platform to another, to avoid the so-called “lock-in effect”.