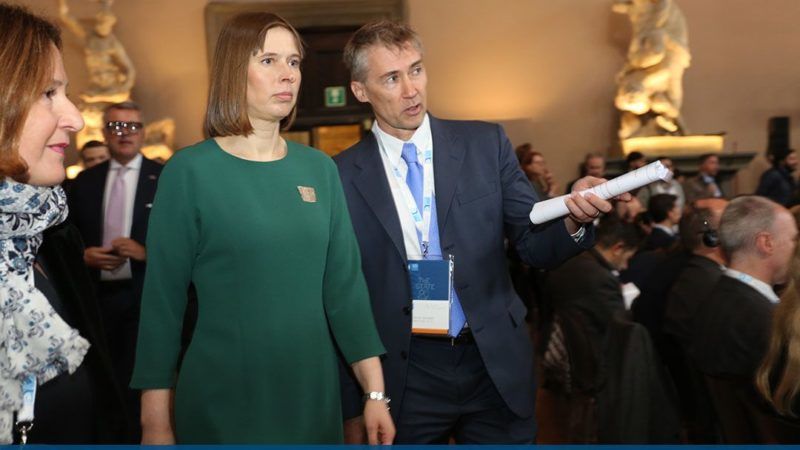 Kersti Kaljulaid is the fifth and current President of Estonia, in office since October 2016. [State of the Union 2017/EUI]

Kersti Kaljulaid is the president of the Republic of Estonia. She is the first female head of state of Estonia since the country declared independence in 1918, as well as the youngest ever President, aged 46. Kaljulaid is a former state official, serving as Estonia’s representative in the European Court of Auditors from 2004 until 2016.

The office you hold, as president of Estonia, is largely symbolic, although it gained weight after the outgoing president Tomas Hendrik Ilves carved out a role as an outspoken critic of Russia. Will it be difficult to fill those shoes?

You don’t fill anybody’s shoes. You make the presidency your own. My role, having lived away from Estonia for so long, is to make Estonians realise that they are, in many areas, among the leading European nations.

In some other aspects, it is a completely normal country, an equal among the 28 member states. This is something that I want to enforce, this comfortable feeling towards the European Union.

According to IMF calculations, Estonia has been a high income country for the last ten years, so it is important that no Estonians are left out of this development.

It is important to give the EU its due recognition for the possibilities it offers to national policy-makers. It is just as important not to blame Brussels for things that go wrong. People in Estonia look at our union with trust, because all Estonian governments have said that they can.

If we look at where we were in 2004 and where we are today, then the numbers speak for themselves – Estonians are two point four (2.4) times richer than at joining.

I’m an economic liberal but that doesn’t mean that I don’t notice the need to make sure the gains of globalisation are equally distributed in society. At least in terms of basic needs, like healthcare and education.

Estonia will hold the rotating presidency of the EU in the second part of the year starting 1 July. You are talking about equal redistribution of wealth. Will that be a priority for your presidency too?

The European Council presidency means you are facilitating the discussion, you aren’t setting much of the agenda. You make sure that everybody’s voice is heard and that there is good progress on what we want to achieve. That’s the role. You don’t put your own country’s ambitions on the table. Quite the opposite.

Nowadays, all aspects of digital are appearing in all policy issues. It’s getting a horizontal approach, because we need it in border control and migration, for information systems. Free trade services need digital freedoms to make progress. There is a digital aspect wherever you look and it appears to be concentrating during our presidency, as people see Estonia as a digital society. Which we are.

So we want to give our contribution within this sphere. But the most important message of our presidency is that the EU is constructively developing and that there is no fundamental issue with it. All policies have been tried and tested during these times of crisis and they have been developed and made better.

Policies are one thing, politics another. The big political unknowns will be the Brexit negotiations. How could Estonia contribute to flattening out divisions?

Estonia has shown a readiness, at very short notice, to organise the Bratislava format summit between the EU-27, in case there is a need to agree on preliminary conclusions.

The Council presidency holder will not have such a big role in the Brexit talks because the direction comes straight from the Council and the chief negotiator, Michel Barnier.

But I have made it clear that if there is a need for discussions, Estonia is known for its quick movement and organisation. I think that is why our partners trusted us to be able to move forward our presidency by six months. We’re ready to help wherever we are needed. We share Mr Barnier’s hope that it will be an amicable process. We also regret it is happening but it is now a fact of life.

The last thing that we want is to see the Union disintegrate. We are sad to see it weakened by undeserved criticism. We want it to prosper from constructive analysis of its values and indeed, sometimes fault lines.

We have decided to place unity at the heart of our presidency because now, more than ever, we see that Europe needs to come together, to consolidate and to act. Of course, this is easier said than done. But by no means impossible to achieve. After all, the EU’s core policies – the single market, the common trade policy, Schengen – remain strong and intact.

Accelerating the decision on the financial accounts ahead of the negotiations is crucial then?

The European Commission has proposed five scenarios on the future of Europe. How do you think you are going to fit into that debate?

Similarly to what I said about the Bratislava format, the best place to think about our future is together. What we shouldn’t do is say we have five options, let’s just choose one. Everything that takes us into the future is a combination of several scenarios.

These five options are meant to help us clarify our thoughts. For example, scenario four, which advocates doing better but doing less, by abiding by the subsidiarity principle. This might release EU funding to better protect the solidarity principle.

We have to think about what each scenario can offer and combine them for the better. In the 21st century, where we see how quickly the definition of a job is changing, I do not think that we can pick a pathway and go down it for thirty years.

If you think about the last century, many things went out of fashion quickly. Look at the mobile phone, you know that in a few years it will be Stone Age technology.

Let’s plan long-term and move into the future. The EU is best placed to deal with this, where member states can come together, often, to take stock. It allows national governments to better take care of their own people.

There are still division between the EU-27, you may have to settle disputes during the presidency. What would Estonia’s vision for moving forward together look like?

As I said, there is no scenario for the 21st century. You have to be ready every day to adapt to changing conditions and technologies. Jean-Claude Juncker’s scenarios allow us to clarify these thoughts.

For Estonia, what is best is a strong European Union and strong implementation of the four freedoms.

Digital freedom is also important, we don’t quite have it yet. Common foreign policy is also a reminder to countries around the world that don’t share our values that we stick together to protect them. Common arrangements on defence cooperation. We stand for all that.

You cannot say that. I highlighted the fact that what we decide in Brussels facilitates member state governments to do their own job.

But it remains the responsibility of national leaders to provide what is expected of them. This is subsidiarity. In Europe, we create the best architecture to enhance the capacity of governments to react.

But you are surely in favour of greater integration when it comes to common defence?

I’m in favour of common foreign policy and defence aspects. This is what member states have decided recently.

The Baltic states have a past history with Russia…

No we don’t, we have a past relationship with the Soviet Union, which occupied Estonia. That’s not Russia. We cooperate the way we can with our neighbouring country, which is Russia. Estonia, like the rest of Europe, wants our partners in the Eastern Neighbourhood to be able to decide for themselves whether to move closer to Europe or not.

Do we need to have a stronger stance on Russia?

We have a good stance on Russia. The sanctions policy implemented three years ago remains in effect today, demonstrating that the European Union can and does pull together and demonstrate unity when fundamental interests and values are at stake. Sanctions on Russia have been rolled over every six months without political debate. We need to wait until it is understood on the other side that without fulfilling the Minsk Agreements there can be no progress.

But you never know what will be the next move from the Russian side. Therefore, you cannot say that our position is fixed.

Lithuania and Latvia, the other Baltic states, have had their shot at the EU presidency. You know their successes and failures. What are your hopes for your turn at the helm?

The most long-standing thing we could do is to reaffirm that fundamental decisions about our freedoms are still valid.

They have stood the test of internal changes and developments in the world and are still valid. There will be a calmer atmosphere surrounding the European project.

On the technical side, we would be extremely happy if our European partners said Estonia had made progress in the files we choose to develop, which relate to the environment, digital freedom and security.

184 days to solve all of the challenges that Europe faces is not a long time. But just like every other presidency, we will do our best to move forward an agenda that we believe will make the EU stronger, safer and more prosperous.

One response to “Estonian president: In the face of Brexit, unity will be at the heart of our EU presidency”