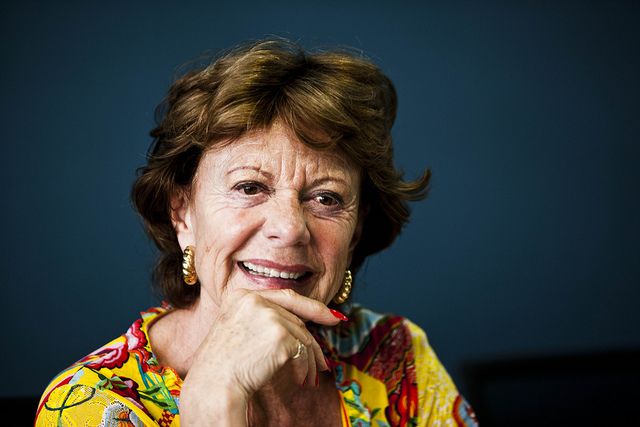 Vice-President of the European Union and Commissioner for the Digital Agenda Neelie Kroes. [Neelie Kroes/Flickr]

SPECIAL REPORT: Coding is not just for the techies, according to Digital Commissioner Neelie Kroes. It will have an increasingly important role in citizens’ everyday lives and that’s just one reason to make sure this global “language” is taught to children at school.

Neelie Kroes is Vice-President of the European Commission and in charge of the Digital Agenda.

Why is coding important? Does it really merit a whole week?

It’s not just a week, coding is for a whole life.  For me it is like writing and reading. We all want everybody to join in with great stuff that makes your world more open, creative, and innovative. With the new technology around these days it makes sense to use coding, this new tool.

You are not only using it, you can play with it as well!

But for this you need the youngsters, the young generation who are born with this in their blood.  They can’t even imagine not having mobiles, iPads or other devices.

Almost five years ago I created our young advisors group, and they actually appointed our digital champions [leading industry figures in the digital industry].

Where did the idea for the week come from?

Well, we were informed about the Microsoft initiative with the US government, which was a huge success. We read about how you can push coding, almost make it a kind of beauty contest, and wanted to do that for our own coding week.

So here, we are; thousands of absolutely fascinating events. It’s like a marketing event. Of course we are asking for all the attention for coding this week – but don’t stop paying it after a week.

But people have to learn how to do it…

There is a difference between boys and girls and their interests in planning their career and educational paths. They have to understand coding is fun and it isn’t just for the techies.

Do you think girls are less interested in coding?

Some are because they don’t know what it is. That’s why it is so important to have this coding week to open up mind-sets.

But before a certain age, the girls are sometimes even more involved in coding. When they are too young to realise there is meant to be a stigma, it is actually 50-50.

But a major problem is that teachers may have to learn to code too. It is probably more difficult for them than the children.

Actually, quite often you do have the children teaching the teachers about coding. There’s always one techie in the class, who offers to help!

But it’s a fascinating point that you are touching upon. In the future, 90% of jobs will have some relation to digital skills.  It is like reading and writing, you need it, some people are using it in a way that is totally different from others. And it doesn’t matter about the career; you could be a teacher or a nurse.

It’s not a matter of “are you in favour, yes or no?” it is a fact of life. And that good reason why it needs to be put in the curriculum, made part of children’s’ education.

When people talk of what you can do with coding, they are essentially talking about apps, aren’t they?

Yes and games. It is giving employment opportunities for people in the EU. But knowing how you can use coding but also how to make it more creative and make it broader is a challenge.

And Europe is the biggest app developer in the world.

I am not that certain.  We do have a couple of excellent, very successful companies such as Spotify or Rovio [makers of Angry Birds].

I think that when we give the tools to people – coding is also a tool – it’s up to you if you are making your business out of it or if you are just having fun or so and so forth.

That’s why coding should be for everyone. Otherwise I fear it is something for the haves and have not’s.

But the EU has no competence over education. You can only give people the information and let people run with it.

Education is not our cup of tea, in a way! When we took this initiative I asked [Education Commissioner] Androulla if she was interested in writing to the education ministers and she said yes.

She can’t force the ministers to put it in their curriculum. But she can explain why it would be a good idea. So together we are just pushing governments and ministers to be aware that coding is not just a luxury.

You were talking about teachers but the other area is ministers. They have to change the culture too.

Is this less rules-based approach more popular with member states?

There’s also legislation in the digital portfolio but not for this, not for coding.

For coding it’s a lot of talking and pushing and trying to get people out of the way of thinking that this is only for the techies. That, in a way, is the whole Digital Agenda.

We also have more than 30 coding ambassadors. They were together in the European Commission. It was such a spirit. Normally people are coming here asking for money or asking to be treated in a certain way but they were saying ‘we don’t need money’ – we need support.

Could coding become another EU language?

I sincerely hope it will become a world language, there should be no limitations. It is a language that is remarkably cross-border.