The US' top telecoms regulator Ajit Pai defended his agency's recent decision to repeal net neutrality rules during a speech at the Mobile World Congress in Barcelona. He also said the EU's "complexity" may cause challenges in its race to introduce fast 5G mobile networks. [GSMA]

This article is part of our special report Mobile World Congress: Europe rushes to keep pace on connectivity.

A lot of the debate around net neutrality comes from misinformation but “this baseless fearmongering will simply lose credibility” once it becomes clear that the internet economy has continued to thrive, US telecoms regulator Ajit Pai told EURACTIV on the sidelines of the Mobile World Congress in Barcelona.

But he warned that the EU’s drive to introduce fast 5G mobile networks quickly may be “more complex” than in the US.

On Monday (26 February), Pai told an audience at the Mobile World Congress in Barcelona that he wants the United States to “lead the world in 5G”. The EU wants the new mobile technology to be available for commercial use across the bloc by 2025.

Pai was appointed chairman of the US Federal Communications Commission by President Donald Trump.

At a panel discussion on Monday, Pai publicly disagreed with European Commission Vice-President Andrus Ansip over net neutrality, the principle that internet service providers should not restrict any online traffic or charge higher rates for faster service to some content.

He has been hit with a storm of criticism for initiating the FCC’s controversial decision last December to repeal the US’ net neutrality rules from 2015. Civil liberties groups and some tech companies lobbied in favour of keeping the rules in place.

This interview has been slightly shortened.

You spoke with Andrus Ansip yesterday about the EU and US’ different approaches to net neutrality. Some European telecoms operators have said that now that the FCC repealed its rules, there will be fragmentation over how internet traffic is regulated. And they are pressuring EU regulators to take a closer look at the law here. Would you want to see Europe repeal or relax measures in its net neutrality law?

I would defer to the European Union and the various member states to make that determination. I had some very productive conversations with my counterparts in Europe at the Commission level and also various member states. I think ultimately we all share the same goal, which is providing digital opportunity to all of our citizens. And what regulatory framework is best calibrated to meet that goal is something that differs from country to country, from region to region. I can only speak for the United States and I wouldn’t presume to prescribe for them what the regulatory framework should be. 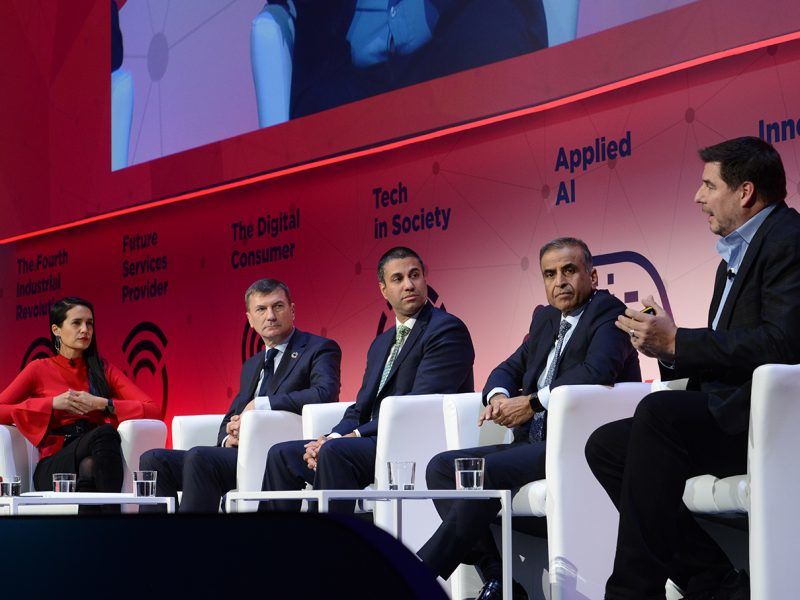 One of your arguments for repealing net neutrality is that it will encourage companies to invest more in 5G. Deutsche Telekom recently published its annual report showing that they invested more than ever in the US and Europe last year. Is it possible to draw such a strong correlation between investment and net neutrality when we’re talking about rules that have only been in place for two years?

We find in the United States that these rules did have a detrimental impact on infrastructure investment. It follows the common sense rationale that the more heavily you regulate something, the less likely you are to get more of that something. Especially when we are talking about the 5G architecture, which will require tens of thousands, if not hundreds of thousands of small cells, and the use of spectrum that has to be purchased at auctions. These are very complex and capital expenditure has to take place. We hope our market-based framework is one that will promote more innovation and investment in 5G. And at the same time protect consumers, as was the case in the past, before 2015.

Why do you think net neutrality has become such an emotional issue?

I think part of it is frankly misinformation. After the decision made by the FCC on December 14, there were a number of headlines proclaiming this as “the end of the internet as we know it.” I think the typical person who might not know the nuances of the differences between Title II versus Title I regulation or the differences between a telecommunications service and an information service in the Communications Act, simply see the headlines and think, “Oh my gosh, this increasingly essential part of our daily lives is about to go away.” And that inspires a lot of fear among a lot of people.

But in the two-and-a-half months since, the internet has not ended. The internet economy has continued to thrive and I think we’ll see going forward, as innovation and investment continue to happen in the United States, that that kind of baseless fearmongering will simply lose credibility. We can focus once again on facts and more reasoned debate on how to promote digital access for everybody in the United States.

A proposal from the Trump administration to build public-funded 5G networks will “end in disaster”, the EU’s top telecoms regulator has warned, urging Europe to speed up plans for its own fast internet networks.

Axios reported a few weeks ago about a Trump administration plan to build a government-run 5G network. You said you oppose that and think it’s a bad idea. At the heart of this plan was the idea that the US government wants to protect itself from security concerns and from Chinese competition in the tech sector. Is all of the talk about global competition over 5G overblown?

From the United States’ perspective, part of the reason why yesterday I said I want the US to be the leader is that historically we have been the leader in 4G and that has produced tremendous benefits for the American economy. Not just in terms of capital expenditures. People are hired to build these networks and that capital is spent in the United States. But ultimately, for consumers in the United States, they have been the beneficiaries of 4G LTE in a way that few other countries have been able to realise. And I want American consumers in the future to be able to benefit from 5G applications and I’m excited about that future if we get the right pieces of the puzzle in place. And a critical piece of the puzzle is spectrum policy. That’s why I was excited to announce yesterday the auctions of the 28 and 24 GHz bands later this year, in November.

Europe struggled to introduce 4G and is trying to catch up but already lagging behind on 5G. How do you see Europe’s position in the race against the US and Asian countries to make 5G services available?

I think it’s difficult in part because there’s a European Union and there are 28 member states and the complexity of that relationship and the regulatory frameworks that might emerge are in some ways more complex than in the United States. It’s obviously a challenge when you’re talking about incentivising the wireless networks of the future. It’s much more difficult than anything we’ve seen in the past. It requires a three-part approach to spectrum, infrastructure policy and network regulation. It’s difficult for the United States to come up with those policies and I imagine Europe is confronting some of those same challenges too.

A major EU telecoms law is being negotiated right now. One point of contention is about the duration of licenses for radio spectrum. Ansip and telecoms operators often point to the US as having the right approach because you auction off licenses for spectrum that are not time-limited. In the EU, there is discussion about requiring spectrum licenses to be at least 10 years long. Could that short length of time for companies to use spectrum be a roadblock for them to introduce 5G?

One of the important things for companies operating in this space is regulatory certainty. If you’re going to raise capital and deploy a service, then you want to know that that asset is something you’re going to capitalise on for a number of years because otherwise you won’t get the return on the investment. That’s just rational for any private sector actor.

In the United States, we’ve tried to provide as much certainty as possible while still preserving that public interest and making sure that public resource is being deployed for the benefit of consumers. We have extended license terms, we also have build-out requirements and reporting requirements to make sure that the public resource is being used for the benefit of the public. I think that’s the happy medium we’ve found to provide certainty to the companies and also to provide value to the American consumers and taxpayers. After all, it’s their resource at the end of the day that is being used. That’s typically how we’ve approached it.

The other issue is we’ve also encouraged a robust secondary market. Let’s say a company does buy a license to use a certain kind of spectrum, it realises its business plan has failed or for whatever reason it doesn’t see a business case for going forward. We’ve made it easier for those companies to sell that spectrum to somebody who does want to use it for the public interest. That secondary market is something that’s been extremely effective for us, including for 5G spectrum above 24 GHz in particular. We think that vibrant secondary market goes to show that the Coase theorem is still alive and well. If you make the transaction costs as little as possible, then ultimately this public resource of spectrum will flow to its highest valued use. We certainly see that in the United States.

There was an FCC delegation in Brussels just a few weeks ago. And there are other FCC Commissioners here in Barcelona right now. Do you have priorities you want to work on with European regulators and policymakers while you’re FCC chairman?

I’ve had a very good relationship with Vice-President Ansip, with members of BEREC [the umbrella group of EU telecoms regulators], with member states. I think there’s a lot of common ground in terms of challenges that we face.

There are rural parts of Europe just as there are rural parts of the United States that we want to get connected. I think there are strategies that all of us employ that we can learn from. In terms of going forward, I think some of the solutions could be very innovative. This afternoon I’ll be meeting with some of my counterparts in Europe and I’ll be talking about reverse auctions that the United States has instituted in order to promote more deployment using federal funding in a fiscally responsible way. I hope that market mechanism is something that they might be able to draw some insight from.

Conversely, they might have some innovations that we could learn from in the United States. One of the things I have consistently said is we have to approach this job in the United States with regulatory humility. We don’t have a monopoly on wisdom and I think European regulators have really thought about some of these challenges in useful ways.