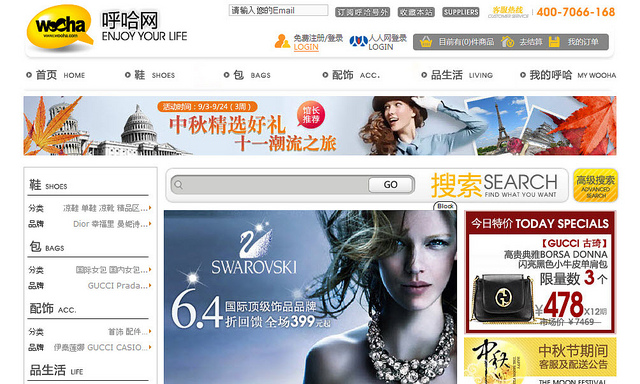 The Asia-Pacific region’s e-commerce sector, driven by the huge Chinese market, has outstripped Europe’s online shopping industry for the first time, according to a report published today (17 June).

The region made € 406.1 billion turnover in 2013, and, with a 16.7% increase, also grew faster than Europe. Europe was the largest market globally for e-commerce after it overtook North America two years ago.

The European market grew by 16% to € 363.1 billion in 2013 and is expected to bring revenue of €425.5 billion this year, trade association Ecommerce Europe said. The figures include Russia and other non-European Union nations.

In 2013, online sales to consumers in the EU were worth €276.5 billion, 87.6% of the total figure for Europe, the European B2C E-commerce Report 2014 said. Despite that, cross-border sales in the EU remained stubbornly low at just 12%, according to European Commission figures. The Commission wants to increase that to 20% by 2020 as part of its Digital Agenda targets (here).

The number of shopping websites grew to 650,000 by the end of 2013. Ecommerce Europe estimated that number would increase by 15 to 20% every year and said that 3.7 billion parcels were sent every year to European customers.

Wijnand Jongen, chairman of Ecommerce Europe’s executive committee, said, “Towards the end of 2016, we believe that the European B2C [business to consumer] e-commerce turnover will have increased to around €625 billion.

“The growth forecast is enabled through the higher spending per e-shopper in mature countries as well as through an increase in the number of e-consumers in emerging countries.”

North America, including the US and Canada, was previously the largest market. As a developed, mature sector, it has less room for growth than both Europe and the Asia-Pacific, Jongen said. North America made € 333.5 billion in 2013, a 6% rise on 2012.

The United Kingdom, Germany and France were the three countries with the highest e-commerce turnover with €107.1 billion, €63.4 billion and €51.1 billion made. They represented nearly two thirds of the total European market (61%) and more than two thirds of the EU alone (69%), the report said.

With turnover of € 177.7 billion, western Europe – UK, France, the Benelux countries and Ireland – represented nearly half of the total European e-commerce market.

Central Europe, including Germany, Austria, Switzerland and Poland, was the second-largest, with turnover of € 93.2 billion.

Emerging countries in southern, central and eastern Europe lagged behind, but are catching up rapidly. There is still huge potential for these markets to develop further, Jongen said.

Sweden, Denmark, Finland, Norway, Iceland and the Baltic states were fourth, with €32 billion, a market share of 8.8%.

Ecommerce Europe said that the sector was a major driver of Europe’s economy. Jongen identified the need for a pan-European e-identification system to increase business domestically and cross-border within the EU. E-identification can guarantee secure access to online services and make sure goods are delivered to the right person.

There is no legal agreement between member states to recognize the different systems working in the EU, which limits cross-border online sales. A pan-European system would solve the problem, Jongen said.

“E-identification is a big topic for consumers throughout Europe. It will not only help our industry, but will prevent cybercrime and increase consumer safety and trust. That could also increase cross-border sales,” he said.

The Commission made a proposal in 2012 to create a legal basis for mutually recognition of identification systems.

STORK is an EU co-funded programme to develop an EU wide interoperable system so that businesses and citizens can use their national electronic identities in any member state. Not all member states are involved as partners in the project.

“People from other continents are not waiting for us,” said Jongen.

E-commerce is trading in services and goods over the internet. The European B2C E-commerce Report 2014, produced by Ecommerce Europe and national trade associations, showed that the sector enjoyed strong growth and high turnover in 2013. Last year Europe, including non EU countries such as Russia, was outstripped by the Asia-Pacific region, which became the world's largest e-commerce market for the first time.