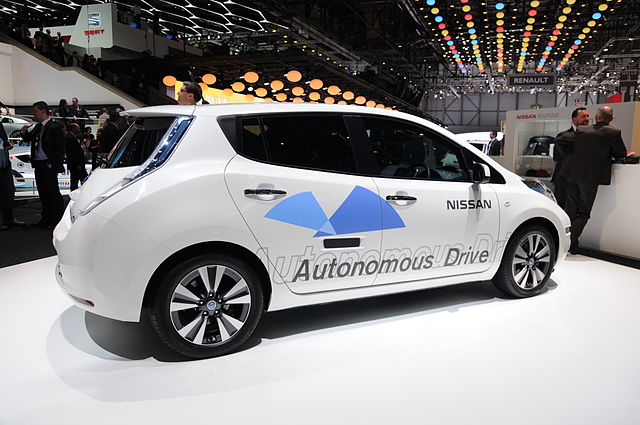 Car companies have called for legislators to draft legislation on autonomous cars. [Wikipedia]

European Commission and Parliament officials said on Thursday (3 September) that they were moving towards regulating connected cars, but are still a long way off from sealing new legislation on autonomous vehicles.

Major car companies have been running tests on autonomous or driverless cars over the last couple of years—and some have had hiccups along the way. Google reported several crashes involving its autonomous cars in the US in this year alone.

Despite accidents, some European companies have launched test drives with autonomous cars on public streets. Germany’s Daimler got the go ahead this month from state authorities to drive their autonomous cars in Baden-Württemberg provided there is a driver in the car.

The British government published guidelines for driverless cars earlier this summer that similarly requires a person to be able to take control of the car even when it’s driving autonomously.

But EU legislators are being cautious about autonomous cars.

European Parliament Vice President Adina Valean said on Thursday (3 September) at a panel discussion in Brussels, “I think it’s still very early to be talking about autonomous cars. Not necessarily because the technological developments won’t be there. But the complexity of the whole thing is huge. Think of allocation of spectrum or security of networks.”

Valean oversees telecoms and IT innovation.

The UN Convention on Road Traffic was amended last year to allow autonomous driving if a person in a car is still able to shut it off. EU countries have signed on to the convention, but the United States, where large tech companies are testing their own autonomous vehicles, is not a signatory.

While car companies are dabbling with technology that enables autonomous driving, vehicles that fully function without drivers are still in the works.

BMW: Still a lot to be done

BMW Vice President Thomas Becker said that in some tests, drivers don’t use the steering wheel, while in others they don’t touch the pedals.

“Everybody is working on the first stages of having the car working gradually more autonomously. But the big issue is that the driver is still required to have his full attention on what’s happening on the road,” Becker said.

Local authorities had lengthy talks with BMW to allow the company’s partially autonomous cars to go for test drives on public roads, even for short distances.

“There’s quite a lot to be done before we can sell fully autonomous cars that can really drive themselves,” Becker said.

According to Becker, autonomous vehicle technology has outpaced current legislation. On top of laws, he said, which are needed to enable the existing technology to be used, Becker called for legislation to sort out the various issues of data ownership and privacy brought out by the move towards connected cars.

>>Read: Cars to be fitted with automatic emergency calling from mid-2018

Audi, BMW and Mercedes partnered last month on their purchase of Nokia’s mapping business HERE. The maps platform shows very precise locations that could be used in autonomous cars, or in connected cars fully operated by drivers.

The German car giants’ purchase of HERE was widely perceived as a move to step up their role in connected car technology and edge out the tech companies they’re competing with in the sector, such as Google and Apple.

“Three German car manufacturers, BMW, Daimler and Audi, are investing in HERE to ensure not only European competency but also competition in the future. So competition policy, transport policy, technology policy, everything around data protection and privacy, it’s all interlinked,” Becker said yesterday.

HERE is also organising a working group with car companies from different countries to create standards for sensors that detect road conditions.

A document laying out the European Commission’s digital single market plans note that many car crashes are caused by human errors that “could be avoided with connected cars and communication between vehicles and infrastructure… and ultimately with automated driving”.

The Commission is starting a public consultation on telecommunications and broadband legislation next week. Later this month, another consultation will focus on free data flows and clouds. Legislative proposals are expected to follow next year in those areas, which Commission officials say will impact connected cars.

Paul Timmers, Director of Sustainable & Secure Society at DG Connect, the European Commission department in charge of telecoms, said the internet of things, and the development of 5G mobile networks, are shaping the way connected cars will be regulated.

“We have to be careful when we talk about business models and who owns data that we don’t take a view that there’s only one actor at play. Car-to-car communication is direct and could mean a future mediated by 5G. That brings another player in,” Timmers said.

Committee of the Regions President Markku Markkula told EURACTIV on Wednesday (2 September) that he’ll meet with EU Transport Commissioner Violeta Bulc in the next month to develop a plan to bring connected cars to regions and cities around Europe.

But the recent hype surrounding connected cars has brought along concerns that cars that rely on internet connectivity are vulnerable to hacking. Security researchers and legislators warned about that risk after a Jeep was hacked by researchers earlier this summer, disabling the car’s brakes and other functions.

Timmers said the Commission is working on cybersecurity measures for cars.

“You’ll have to do end-to-end cybersecurity that’s really not trivial, that’s in the car and outside the car and in between cars, with the environment.”

Autonomous or driverless cars do not need driver intervention to function. Car companies have been calling for laws that would allow autonomous cars to drive more freely in Europe.

The EU has been leading initiatives to promote road safety and traffic management by pooling information provided by cars that are hooked up to the digital network infrastructure, as early back as 2010. In particular, the EU executive wants wants the industry to convert their efforts into "a global market success" via enhanced co-operation and standarisation of ICT-aided cars. Car manufacturers have also invested heavily in these.