Balkan media conference: ‘The EU barks rather timidly to enemies of press freedom ‘ 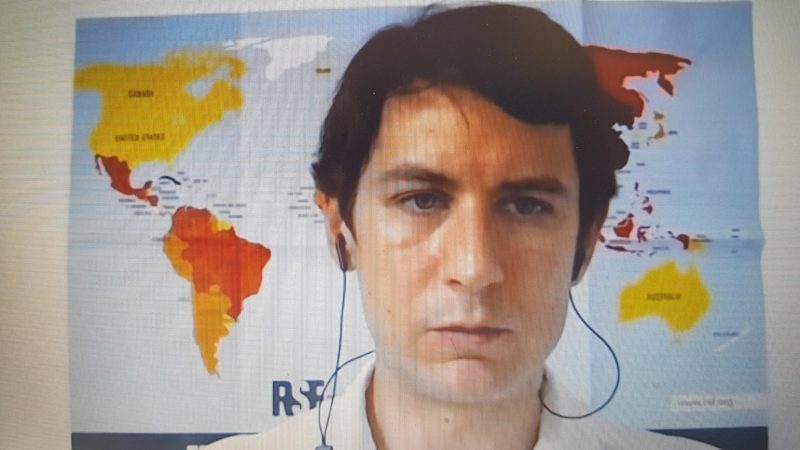 Pavol Szalai from reporters Without Borders (RSF) during the online event. [Georgi Gotev]

Media freedom throughout Europe needs all the support it can get, but the situation in the Balkans is particularly worrying, participants told an online conference “Media Freedom in the Balkans” organised by EURACTIV.

The situation for independent media in the region has deteriorated sharply in recent years, panellists told the event on Thursday (3 June), setting the stage for an international debate on media freedom in the Western Balkans.

Independent media are at risk and could not survive on their own as they are part of a political and economic environment that favours mainly pro-government and state media. At the same time, journalists who go against the tide are too often victims of harassment and even physical attacks.

“Journalism in the Balkans is suffering and urgent action must be taken,” said Pavol Szalai, Head of the EU/Balkans Desk of Reporters Without Borders (RSF).

According to RSF’s latest World Press Freedom Index, Bulgaria ranks last in terms of press freedom across the European Union, on place 112 of 180 countries worldwide. Serbia ranks at place 93, and Northern Macedonia at 90.

“The EU has to be the guarding dog of the media. The EU is a big dog, but has small teeth that barks rather timidly on enemies of press freedom and bites very little  indeed, it does not have very strong teeth. It must bark more and have stronger teeth and bite more”, Szalai said.

“Every day in Serbia there is pressure on independent media. The media environment is controlled by people close to the ruling party”, Diklić said.

“In Serbia, only President [Aleksandar] Vučić takes decisions, although he has no right to do so,” he added.

The Serbian journalist pleaded for help from the EU, saying that smaller media organisations no longer have the means to work independently.

Panellists said the situation in Serbia is reminiscent of the situation in Bulgaria during the three terms of former prime minister Boyko Borissov when he had the backing of media mogul Delyan Peevski.

Bulgarian MEP Elena Yoncheva (S&D) said that in Bulgaria “journalism is being killed slowly but systematically”. According to her, “there is neither freedom of speech nor rule of law” and citizens are being poisoned with populism and propaganda.

“The fact that the EU is monitoring the situation is not enough. The European Commission must take concrete action. Providing financial support to small media is a potential solution, as this is one of the main problems,” Yoncheva urged.

EURACTIV Bulgaria’s Antoinette Nikolova, who is also the founder of the independent organisation Balkan Free Media Initiative (BFMI), shared her personal experience. Until early last year, she was an EU affairs reporter for the Bulgarian Nova TV.

“I asked prime minister Borissov about his property, then I was fired and lost my job,” said Nikolova, who has since returned to the station on a freelance basis. The station was recently bought by a Western group, signalling positive changes in the media landscape.

A topic raised by various speakers are the franchises which the pan-European media conglomerate Euronews sold in Serbia and Bulgaria. In Serbia, the franchise was bought by a state firm, while in Bulgaria, the buyer is an arms trader in connection with spin doctor for Boyko Borissov.

Diklić said he believed the goal was for autocrats to control the narrative about their country. He said that at the same time, the CNN franchise, which is owned by a media critical of the government in Serbia, has no chance of receiving a broadcasting license.

Nikolova meanwhile said that BFMI had sent an open letter to 20 public service broadcasters, including France Télévisions, Italy’s RAI and Ireland’s RTE. The organisation urges the broadcasters to reconsider their relationship with Euronews following the company’s decision to enter questionable partnerships in Bulgaria and Serbia.

Public operators collectively own only 12% of Euronews. The remaining 88% stake is owned by Egyptian billionaire Naguib Sawiris and his Média Globe Network.

Light at the end of the tunnel?

The moderator of the conference, Georgi Gotev – journalist and publisher of EURACTIV Bulgaria, said that he was happy because in Bulgaria he could already see “some light at the end of the tunnel”.

The conference came the day after authorities in Washington sanctioned, under the “Magnitsky Act”, Delyan Peevski who has been cited for years as the main reason for the deterioration of the media environment in Bulgaria.

The gambling oligarch Vasil Bozhkov was also sanctioned for admitting that he had paid more than BGN 60 million (€30 million) in racketeering money to then prime minister Borissov. The Bulgarian prosecution did not investigate his claim.

The Commissioner for Neighbourhood and Enlargement Olivér Várhelyi addressed the event in a video message, assuring that irregularities received by the Commission were being investigated. The Commissioner emphasised that media freedom must go hand in hand with respect for the rule of law.

Meglena Kuneva, the first Bulgarian EU Commissioner, currently serving as an ambassador of the EU to the Council of Europe, focused her comments on the Strategic Lawsuits Against Public Participation (SLAPP), a legal tool being used to silence journalists.

According to her, media freedom is a fundamental human right and states are committed to respecting it. Kuneva acknowledged that the EU has sufficient mechanisms to protect the media and spoke in support of bolstering financial support to the sector.

Regarding the case of detained Belarusian dissident journalist Roman Protasevich, Kuneva said the EU has no special mechanisms to help secure his release, Belarus not being a member of the Council of Europe.

According to the Romanian MEP Ramona Strugariu (Renew Europe) media freedom is in trouble not only in the Balkans but throughout Europe. However, she said she remains positive, pointing to legislative changes prompted by recent investigative journalism.

Andris Kesteris, principal adviser for Civil Society and Media at the European Commission (DG NEAR), stressed that the EU executive is ready to help small media organisations maintain their independence.