"Deploying an environmental strategy requires a lot of effort, but it comes with significant benefits: improving brand image, engaging customers and talent, and anticipating potential regulations rather than being subjected to them," according to Agathe Martin, a financial analyst at Fabernovel. [Shutterstock]

Google, Apple, Facebook, Amazon and Microsoft, known as ‘GAFAM’ in France, say they are protecting the environment, but that’s not the point. Partly responsible for the carbon impact of digital technology, these multinationals are mainly trying to minimise damage. EURACTIV’s partner La Tribune reports.

“The massive use of renewable energies and achieving a neutral – or even a negative – carbon footprint”: Digital giants, known as “GAFAM” (Google, Apple, Facebook, Amazon, Microsoft), do not skimp on the great green promises.

And a lot needs to be done. The digital world’s environmental footprint in 2019 “represented a seventh continent, two to five times the size of France”, according to Frédéric Bordage, the founder of GreenIT, which brings together French players in sustainable IT.

Among other things, digital technology would be responsible for 3.8% of greenhouse gas emissions and 5.5% of the world’s electricity consumption. And this impact is only increasing as the world economy becomes more digital.

Netflix alone, for example, consumes 25% of bandwidth in France and 15% worldwide.

Another worrying trend is the exponential growth in the number of connected objects, despite the trend still being in its infancy. In 2010, there were 1 billion, while the number is set to be 48 billion by 2025!

In other words, and contrary to popular belief, digital technology is an environmental disaster and the tech giants, who dominate this economy, are partly responsible. 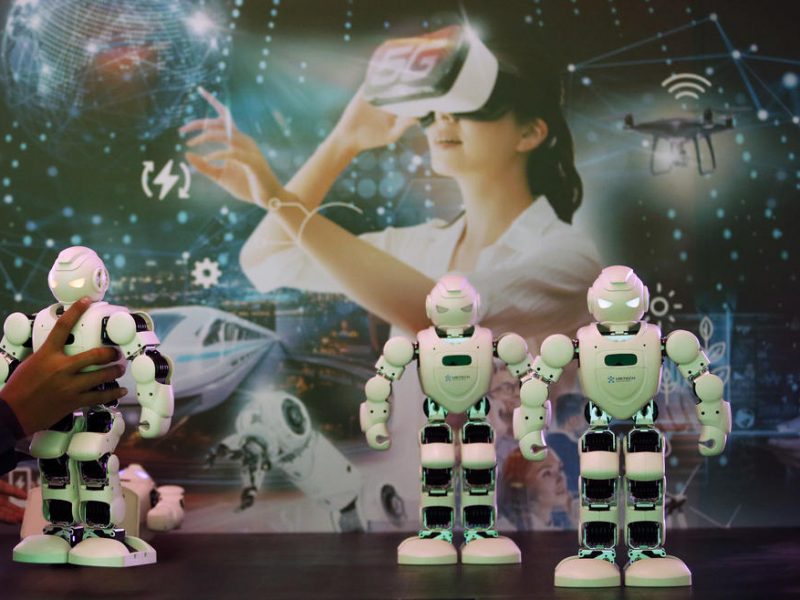 Under great pressure, tech giants are, therefore, multiplying their commitments to reduce their impact on the environment.

Most recently, Amazon boss Jeff Bezos, one of the world’s richest entrepreneurs, announced, in mid-February the creation of a $10 billion fund “for the Earth”. The aim would be to fund “scientists, activists, NGOs – any effort that offers a real opportunity to help preserve and protect the natural world,” he said on Instagram.

Microsoft also chose to unveil its commitments in mid-January, a few days before the World Economic Forum in Davos, which was devoted to the environment this year.

The Redmond-based firm, which has claimed a carbon-neutral footprint since 2012, has promised to achieve a negative carbon footprint by 2030, meaning it wants to reduce more carbon from the atmosphere than it emits. It has even pledged to offset all of its carbon emissions since its inception in 1975 within 30 years.

To achieve this, the company is promoting the creation of a $1 billion “climate innovation fund”. The fund is expected to finance carbon capture and disposal technologies, among other things. Microsoft also says it wants to use only renewable energy for its data centres, offices and campuses by 2025, and promises to participate in reforestation projects.

“Since the end of 2019, we are witnessing the emergence of a ‘green wave’ within the GAFAM (Google, Apple, Facebook, Amazon and Microsoft)”, said Jean-Christophe Liaubet, associate director at the consulting firm Fabernovel. “The environment is now at the heart of their communication. Is it greenwashing or sincere initiatives? Probably a bit of both,” the specialist added.

Technology companies began to take up the subject at the turn of 2010, following the first reports from NGOs such as Greenpeace on the environmental impact of the cloud.

“This led to a chain reaction of varying degrees of speed. Apple was a forerunner, followed by Facebook and Google. Amazon reacted later,” commented Agathe Martin, a financial analyst at Fabernovel.

Thus, Apple claimed in 2013 that all its data centres were powered by renewable energies such as solar and wind. Google, for its part, has announced that it will “rely 100% on renewable energies for all its activities worldwide, including offices and data centres” since 2017 – an objective that Facebook promises to achieve during this year.

For Agathe Martin, this recent surge can be explained by the “growing pressure from all stakeholders” including the customers who “now want to consume sustainably” and investors “who are increasingly creating specific funds that include environmental criteria”.

And the employees themselves, “who no longer hesitate to get involved,” said the specialist. This was notably the case at the end of January at Amazon, where more than 350 employees openly criticised the company’s environmental policy in an online petition. This pressure goes hand in hand with the funding capacity of these big tech giants.

“In 2019, they have accumulated $471 billion in cash, cash equivalents and marketable securities. This is a huge amount of money! By way of comparison, the average annual budget of the US EPA (Environmental Protection Agency) has averaged $8 billion since 2001,” said Agathe Martin. 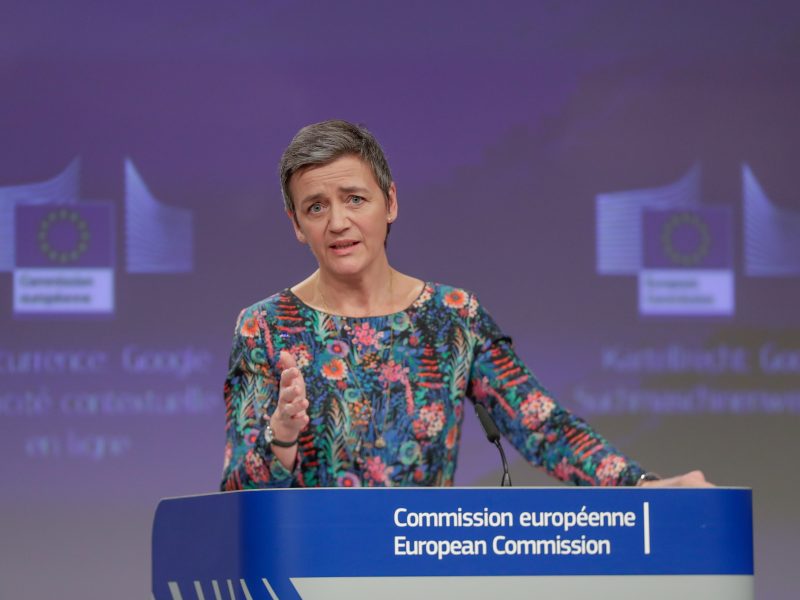 Europe needs to decide on a digital tax and should lead the way if there is insufficient consensus globally, the EU competition commissioner Margrethe Vestager, said on Monday (8 April)

Real effort, but it’s not worth it.

Faced with this widespread awareness, the technological juggernauts are, therefore, willing to commit themselves to the environment. all the more so as they find it to their advantage.

“Deploying an environmental strategy requires a lot of effort, but it comes with significant benefits: improving brand image, engaging customers and talent, and anticipating potential regulations rather than being subjected to them,” according to Martin.

But are the real efforts made by the Internet giants sufficient? “Today, GAFAM’s actions are more about minimising damage,” she added, because these tech giants focus mainly on renewable energies and the reduction of carbon emissions.

But the environmental impact of digital technology is not limited to data centres alone – quite the contrary. In 2019, the digital world consisted of 34 billion pieces of equipment for 4.1 billion users worldwide (excluding accessories such as chargers, keyboards, mice, USB keys, etc.), according to a study carried out by GreenIT.fr. Besides, there are also data centres and networks.

The announcements of these tech giants, therefore, focus mainly on the tip of the iceberg.

“Today, to be politically correct, companies must at the very least position themselves on the climate,” said Frédéric Bordage, founder of GreenIT.

“For the GAFAM, it boils down to greenhouse gases and renewable energies, because they only meet the minimum demands of their clients, which reflect civil society’s understanding of the issues;” he said.

Amazon is a perfect example. In September, the e-commerce giant announced that it wants to achieve carbon neutrality by 2040 and promised to achieve 50% zero-carbon deliveries within ten years.

The Seattle-based firm estimates its carbon footprint – linked to its direct and indirect activities – at 44.40 million tonnes of CO2 for the year 2018, according to the latest figures released. It is also committed to only using renewable energies for its data centres by 2030.

The issues related to the entire value chain, such as the depletion of natural resources, the extraction of rare materials and waste management, have, therefore, been forgotten. Users account for 54% of the overall energy balance of digital technology, compared with 29% for networks and 17% for data centres, according to GreenIT.

“The promises made by technology companies are a step in the right direction, but it is by no means enough to make it possible to reduce environmental impacts concretely,” said Frédéric Bordage. 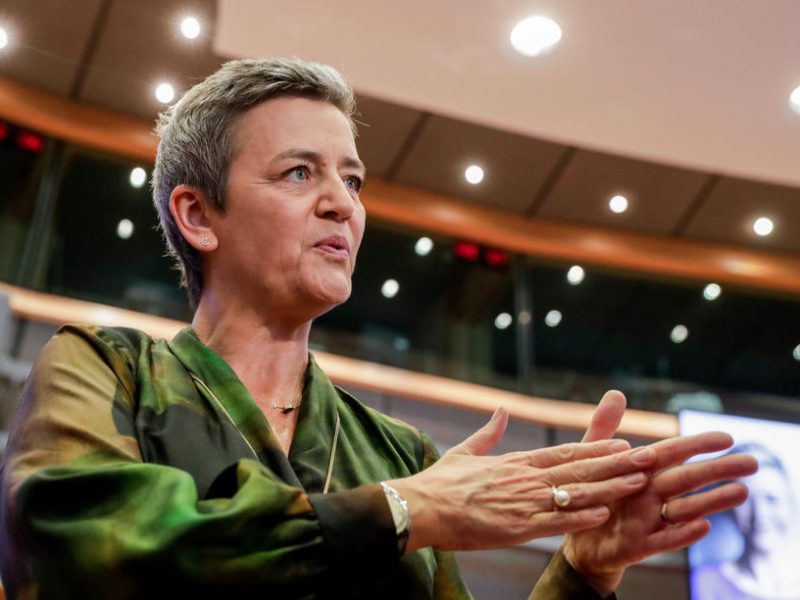 Global tech giants have been sowing the seeds of an economy predicated on ‘biopower’, amid the EU’s attempts to rein in their dominance, the bloc’s Competition Commissioner Margrethe Vestager has told EURACTIV in an exclusive interview.

Ecology and profits: headwinds for GAFAM

To go further, technology companies should encourage subcontractors but also consumers to make sustainable choices. Apple says it is mobilising in this direction.

For example, it claims to have “reduced the average energy used by its products by 70% since 2008,” according to its website.

Since 2015, it has also launched a program dedicated to its subcontractors, to encourage them to use only use clean energies for their production dedicated to the Cupertino firm. The iPhone manufacturer now claims 44 subcontractors in its programme.

But at the same time, Apple is regularly accused of practising programmed obsolescence –  deliberately degrading its own devices to encourage consumers to buy more recent models.

In 2017, the Cupertino firm admitted that its iOS operating system deliberately slowed down the processors of some older iPhone models (iPhone 6, iPhone 6 s and iPhone SE). Apple justified this manoeuvre saying the aim was to “prolong the life of its devices”.

The reality is that the worm is in the fruit: environmental protection ends up colliding with the very nature of the activities of these tech giants. Encouraging more sustainable consumption is in total contradiction with their economic interests,” stressed Agathe Martin.

“Whether they are manufacturers or platforms, their interests are, respectively, to sell more and more products and to massively aggregate data to attract new customers and advertisers,” she added.

“All stakeholders are full of contradictions. Consumers themselves have not been prepared to ignore the convenience of digital technology,” said Martin.