The European Commission will present the Digital Markets Act on December 15, targeting a narrow scope of online platforms. [Shutterstock]

The scope of online platforms that will come under new regulatory prohibitions as part of the  European Commission’s forthcoming Digital Markets Act (DMA) will be narrowly targeted to a set of ‘big operators,’ the EU executive has revealed.

The announcement is likely to reassure several of Europe’s smaller online platforms, who had previously raised concerns about coming under the scope of the new rules, due to be presented by the Commission on 15 December.

One pillar of the Digital Markets Act concerns a list of practices to be prohibited with ex-ante regulation as part of a ‘blacklist,’ likely to outlaw around four specific activities by large platforms.

Meanwhile, a ‘whitelist’ will propose affirmative obligations and a ‘greylist’ will put forward a series of activities in need of authorization by a competent body.

Speaking at an online competition conference hosted by consultancy Charles River Associates on Tuesday (8 December), Olivier Guersent, head of the Commission’s DG COMP, revealed that the rules would only apply to a select number of firms active in the platform economy.

Guersent said the EU executive’s thinking in this regard has been to draw on years of knowledge garnered through EU antitrust enforcement, as a means to identify a small number of practices that would no longer be permitted on the bloc.

In the past, EU regulators have launched a series of antitrust probes against digital giants for a range of practices including the pre-installation of certain applications, platforms’ use of data, and self-preferencing activities. Abusive iterations of such practices were all contained in an earlier leaked draft of the Commission’s blacklist prohibitions. The Commission had originally intended the tool to investigate markets close to failure in the digital economy and impose case-by-case remedies as necessary. However, the instrument has been ‘downgraded’ following concerns raised by the Commission’s internal review panel, the regulatory scrutiny board.

The board expressed concern over the ‘legal basis’ of the tool, in light of powers that EU competition regulators already have.

As a result, EU regulators were required to rewrite the purpose of the instrument, meaning that any investigations it carried out would no longer lead to remedies but only to new services being added to the scope of ex-ante rules, new companies being designated as gatekeepers, and certain new practices being regulated.

On Tuesday, Guersent noted that this functionality for the market investigation tool would help make sure that the EU’s digital single market was ‘futureproof’ in terms of anticompetitive platform abuse. The Commission, he added, would still seek robust enforcement of its competition powers as they currently stand.

Meanwhile, the UK’s competition authority issued advice to the government on Tuesday on how best to reign in the dominance of online platforms, targeting firms with so-called ‘strategic market status’ (SMS).

As part of the recommendations, the Competition and Markets Authority (CMA) said that a ‘Digital Markets Unit,’ whose establishment the government announced recently, should ensure compliance with a new digital competition regime.

Such a framework should include a legally binding code of conduct to shape the behaviour of powerful digital firms, pro-competitive interventions such as introducing interoperability obligations for digital services, and closer scrutiny of mergers involving tech giants.

Speaking at the same competition conference on Tuesday, CMA Chief Executive Andrea Coscelli noted in particular how the UK’s codes of conduct will draw parallels with the EU’s approach to introducing a blacklist, but with an added level of ‘tailoring’ to the specific abusive practices taken out by such ‘strategic market status’ platforms.

“Our plan will be a bit more tailored to individual companies,” Coscelli said. “We’ll essentially have, by company and by market, a set of rules which will eventually become principles, very similar to the idea of the blacklist or the whitelist, but there will be an extra step of tailoring them.” 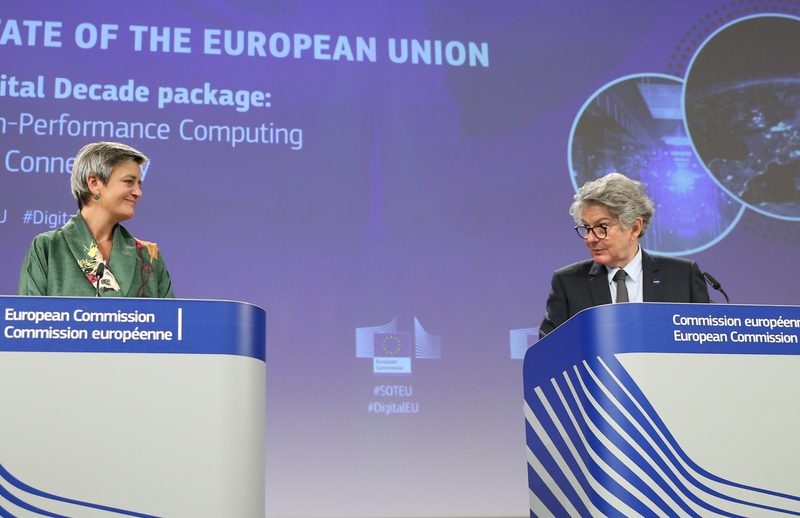 The EU has the power to execute a potential breakup of global Big Tech giants, but it is not currently the “right thing to do,” the EU’s Vice-President for Digital Affairs, Margrethe Vestager, has said.

Talk in Brussels has often veered off to the idea of imposing harsher competition remedies against antitrust abusers, such as breaking up tech giants, despite theoretical reluctance from the EU executive.

The Commission has powers, as defined in Article 102 of the Treaty, to impose a series of remedial measures against firms that have abused their dominant market position, including the mandating of a breakup of a business.

However, for some competition authorities across the bloc, such measures should always represent a last resort.

Andreas Mundt, president of the German Bundeskartellamt (Federal Cartel Office), believes the EU should adopt a more ‘innovative’ approach to the idea of big tech breakups.

Referring to a 2019 case where the Bundeskartellamt imposed restrictions on Facebook’s ability to combine user data from different sources, Mundt noted that such could be considered a form of ‘structural separation’ in itself.

“Of course, this is no structural remedy, it is a behavioural remedy but it has a structural result,” Mundt said. “Maybe we need to be more innovative, with regards to that. I always call this type of decision an internal divestment, or an internal unbundling.”

“We have to be more creative with regards to these kinds of remedies in order really to break the dominance [of platforms].”

For France, greater transparency of the platform giants’ use of data and algorithms, and their general business strategy, is an important first step in taking necessary competition measures.