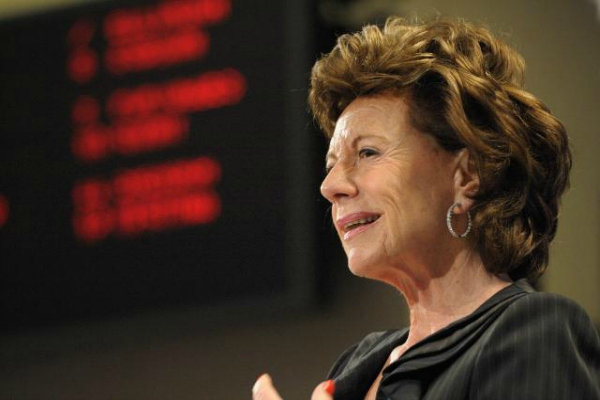 This article is part of our special report Cloud Computing.

The European Commission released yesterday (27 September) its EU strategy on cloud computing, which promotes off-site data storage in a bid to create new jobs and raise €160 billion per year in information technology savings.

Neelie Kroes, commissioner for the digital agenda, said the strategy would translate into savings of around €300 per person each year. Once the strategy is fully underway, the EU executive said it expected gains of some €600 billion between 2015 and 2020 overall.

The commissioner also sees cloud services as a driver for economic growth, saying it could generate 2.5 million new jobs, depending on how efficiently the strategy is taken up.

Smaller businesses stood to benefit the most, with forecasted savings of some 10-20% in ICT, due to the cheaper running costs of cloud.

By participating in an EU-wide strategy, member states would also benefit from a “competitive advantage” on the world scene, due to the size of the European market and the trust created by a common approach, Kroes further argued.

In cloud computing systems data, including copyrightable files such as music, can be transferred to servers outside national borders, raising concerns about applicable law.

One of the chief stumbling blocks towards cloud benefits was if services were “only done at member state level”, said Carl-Christian Buhr, a Commission technical expert. A cross border approach, the Commission said, would be unworkable if there were 27 different rule sets.

Companies in Germany for example had regulations preventing them from making use of the cloud, Buhr claimed, since rules there stipulate the need to control their IT physical infrastructure.

Kroes echoed that, saying that “with national rules we are lost”, adding the EU executive was taking steps to persuade companies to make use of the cloud and to increase consumer confidence.

The Commission attempted to allay user worry that their data may not be as safe if it is stored in another country, by suggesting that they could make sure their cloud computing contracts specified its physical location.

The EU’s proposed Data Protection Directive, currently doing the rounds in Parliament, requires information to be stored either in the European Economic Area or in a country with equivalent privacy laws, but does not have any clauses written specifically to address cloud issues.

Cloud computing creates a crucial problem: since there is no limit to memory capacity, consumers can create an almost unlimited number of copies of media. Therefore levies cannot easily be applied.

The Commission communication admits that "questions arise on the possible collection of private copy levies for any private copying of content to, from or within the cloud."

Copyright levies administered by collecting societies are imposed on music and content downloads onto devices with memory, such as memory sticks, mobile phones and laptops. The EU executive said it was “in favour” of these tariffs as they had helped buffer artists from the growing prevalence of illegal downloads.

Powerful European collecting societies have resisted a multi-territorial approach since they currently benefit from holding licensing rights in individual countries.

As a result the EU paper appears to shelve discussions on the future role of collecting societies, pending the results of a 'mediation process'. The Directorate General for the Single Market launched this process "with a view to harmonising the methodology used to impose levies".

“The collecting societies want copyright to apply in the cloud the way it does elsewhere,” said Kostas Rossoglou, senior legal advisor at the European consumer organisation BEUC.

However, Kroes's Digital Agenda directorate see cloud as an opportunity to boost a single market in copyright.

A draft of the communication said the uptake of multi-territorial licenses by commercial users was “proving difficult, cumbersome and costly”.

The EU executive said it will work with the WTO and OECD to establish common international objectives for off-site data storage.

As a result the EU will continue to include cloud computing issues in free trade negotiations, such as with India and Singapore.

Among the issues to be raised in international discussions is data protection, liability of intermediaries, standards and operability requirements, and application of tax law to cloud services.

All the data that is created online in web-based services, such as Hotmail and Gmail, has to be saved somewhere.

In contrast with the fanfare for off-site data storage in Brussels, the New York Times claimed this week that the reality of these data centres was "sharply at odds with its image of sleek efficiency and environmental friendliness".

"Most data centers, by design, consume vast amounts of energy in an incongruously wasteful manner, interviews and documents show," the US daily said.

The report went on to claim that data centres can waste up to 90% or more of the electricity they pull off the grid.

These storage sites consume between 1.1 and 1.5% of global energy use, with Google data centres alone accounting for 0.01%. By comparison, Transport accounts for some 25%.

Heath told EURACTIV: "It's fundamentally true that data centres are unsustainable if they don't change".

Monique Goyens, Director General of The European Consumer Organisation (BEUC) said: "This Strategy lacks the ambition to properly protect European consumers and solve key issues such as data protection, copyright and contract conditions. As the EU helps to push more content towards the cloud, we cannot lessen consumer protections even further from those we have on the ground."

Allowing businesses themselves to choose whether to safeguard consumer rights, as has been proposed here by ‘optional regulation’, is extremely risky and leaves consumers vulnerable to unfair contract terms. Rules should not be made to be chosen."

Amalia Sartori, and MEP and chairwoman of the European Parliament's industry, research and energy (ITRE) committee said: "Reducing costs, boosting productivity and economic growth, increasing competitiveness, creating jobs, and saving energy are the main advantages of Cloud computing. Its importance is unquestionable. On a daily basis, the number of companies, organisations, institutions and individuals that are realising the opportunities granted by the use of Cloud services continues to grow".

"However, in order to fully seize all the possibilities the Cloud offers, we must face a number of crucial challenges, such as the level of harmonisation, the creation of common technical criteria, the transparency and security of data exchange and the involvement of the public sector which is a major buyer of IT services in Europe", she went on to say.

Pilar del Castillo Vera, an MEP and the Parliament's EPP group coordinator in the ITRE committee, added: "There is a clear link between the Cloud Computing Strategy and the completion of the Digital Single Market; a market which represents today the heart of the Single Market, but which still needs to eliminate all the existing barriers in areas such as consumer protection, Intellectual Property Rights, data protection, specific product regulations, and payment transactions. In this sense, the proposed Cloud Strategy will touch upon many aspects that affect the need for harmonisation. It consequently has the potential to become an important accelerator in the completion of our Digital Single Market. Let us not lose this opportunity."

Association for Competitive Technology President Jonathan Zuck lamented the lack of a single market but said: "Cloud computing is a fundamental building block for success of the European SME's, providing the ability to compete with much larger players and expand quickly into new markets.  Europe's innovative SMEs are looking to the Commission to demonstrate the leadership necessary to create a unified market for cloud computing services with flexible rules that enable innovation and growth."

European Conservatives and Reformists group industry spokesman Giles Chichester MEP said: "Cloud computing offers an enormous economy of scale for businesses and consumers. Instead of constantly having to update security protocols or software on every company's desktop computer, the majority of the work will be done by the cloud computing companies themselves. With increased use of tablet PCs and smartphones the cloud will mean that any wifi connection can immediately be turned into an office.

"The commission has adopted the right approach. There is often a propensity by regulators to regulate emerging technologies before they have had the opportunity to reach their potential. We must avoid precipitous regulation of cloud computing that could kill off a technology that will deliver much-needed jobs and growth. Instead, we should embrace this as an emerging technology that may need further regulation in the future", he said.

ECR civil liberties spokesman Timothy Kirkhope MEP added: "Data protection has to be a major priority and the work we are already carrying out on a new EU-wide data protection framework will hopefully provide more businesses with the confidence to take advantage of this exciting development."

Stephen Collins, head of EU policy at Microsoft EMEA, commented: "The EU Cloud Computing Strategy will help Europe capitalise on the great potential of this technology by removing the remaining obstacles, paving the way for wide-scale uptake across Europe. In times of austerity this new strategy could be part of Europe’s New Deal – underpinning a return to jobs, growth and prosperity for millions. The strategy provides a framework for further harmonisation, clarity and assurances businesses need to move to the cloud and bring growth and technological innovation to Europe.”

Ian Winham, executive vice-president chief financial officer of Ricoh Europe, a multinational imaging and electronics company, said: "Until now, businesses like ours have invested significant time and resource to build a cloud infrastructure that has overcome the challenges of the regulatory maze.  This maze is an outcome of the many divergent laws in Member States – especially regarding what data can be stored and where. The EU’s Cloud Computing Strategy addresses this and more by encouraging common standards which we will be supporting. We believe that it will unlock a wealth of potential by empowering more European businesses and particularly SMEs to adopt cloud. As a result they will experience a far more efficient IT and business process environment."

"ETNO is fully supportive of the Commission's efforts to ensure that Europe is cloud-friendly and open for business" said Luigi Gambardella, executive board chairman for ETNO, a European telecoms association. "The European Cloud Partnership announced earlier this year was an important first step and this new Strategy announces more welcome actions, from which many of ETNO's members will benefit as cloud providers".

Cloud computing describes a whole range of infrastructure, software, data or applications residing in the cloud – that is to say, off your own premises and accessed via the Internet.

A study carried out by the University of Milan, published in late 2010, estimated that cloud computing has the potential to create 1.5 million new jobs in Europe over the next five years. The sector's turnover worldwide in 2010 was estimated at around €26 billion, adding new meaning to the phrase “every cloud has a silver lining.”

While businesses and governments wax lyrical about the benefits of cloud computing, EU regulators have been more wary, as further use of cloud systems would mean a large swathe of public and commercial data would migrate to servers possibly located outside national borders or even on other continents.

Meanwhile the issue of how copyright issues are dealt with in the cloud challenges the business models of the Europe’s powerful collecting societies which license music use within strict territorial boundaries.