By Jairo Mejia | EFE with EURACTIV.com 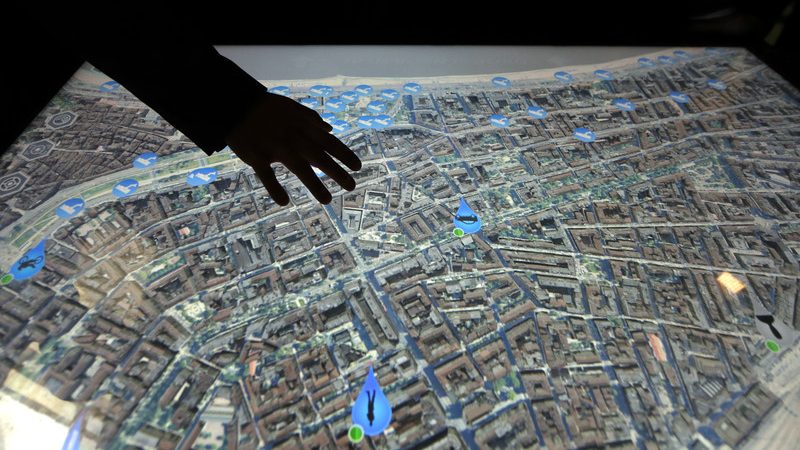 A man uses a tactile table with a street map during a visit French Interior Minister Gerard Collomb at the municipal police supervision centre as part of the Euro-Mediterranean conference of cities on the prevention of radicalisation and for the fight against terrorism in Nice, France, 29 September 2017. [EPA-EFE/ERIC GAILLARD]

The largest conglomerations of people worldwide at the start of this year could be observed at train and bus stations, airports, city squares and parks, EURACTIV’s media partner EFE reports.

Now supermarkets attract the biggest crowds, although in the coronavirus era the maximum number of individuals moving through the same place at roughly the same time has fallen sharply, a phenomenon particularly apparent in places like Spain and South America where people have strictly adhered to stay-at-home orders, according to Efe analysis of anonymized cell phone data.

Based on aggregated data provided to Efe by consulting firm Advan showing crowds of more than 500 people over a period of an hour, Madrid residents gathered on a calm Jan. 15 winter day in the multicultural tourist neighborhood of Lavapies, were stuck in traffic jams or working in offices in the northern sector of Manoteras and took part in different events scheduled at the IFEMA fairgrounds

On the other side of the ocean, the biggest throngs of people during the Southern Hemisphere summer could be found in Uruguay’s tourist resort of Punta del Este, while residents and tourists in Buenos Aires gathered in and around that capital’s exclusive Puerto Madero neighborhood and the city’s historic downtown. In Bogota, Carrera Septima (Seventh Street), like any other Wednesday, was jam-packed with cars.

Three months later, cell phone data from April 15 and April 22 show that the number of people remaining at least 15 minutes in one city block has dropped in large metropolises due to the spread of the novel coronavirus.

During April, the month in which adherence to stay-at-home measures hit its peak, the largest conglomerations of people were seen at supermarkets, hospitals and poor city neighborhoods in developing countries, where social-distancing challenges are much greater.

In some parts of the United States, people have continued to move about in relatively normal patterns; in Spain, individuals congregate at supermarkets; in Montevideo, the biggest crowds occur at seaside spots in the afternoons; and in Buenos Aires, people have abandoned the city center for residential neighborhoods.

Google location data confirms that in countries like Spain, Colombia, Ecuador and Argentina, where people can be fined for being on the street without authorization, activities such as shopping and use of public transportation have plunged (by around 90 percent), while essential commercial establishments such as supermarkets and pharmacies have seen more moderate drops (of roughly 40 percent) in terms of crowd numbers.

According a preliminary study by MIT Media Lab, a research laboratory at the prestigious Massachusetts Institute of Technology, a typical New Yorker has gone from coming into contact with around 80 people per day to just eight in April, while the total distance covered daily has fallen by 70 percent.

“Previously, most contacts occurred in restaurants, offices, sporting events, etc. Now a person’s life in a city stricken by the pandemic occurs at home and at the supermarket, although in the United States the measures have been unevenly applied” and the sharpest changes in daily patterns have been observed in Covid-19 focal points, like New York City, Esteban Moro, a researcher at Madrid’s Carlos III University and MIT’s Institute for Data, Systems and Society and one of the study’s authors, said in an interview with Efe.

“If we want to avoid a second wave of the virus, we have to use geolocation data and trace the contacts of positive cases in an anonymized manner. Social distancing cannot be maintained year-round, and will have to be controlled in a more precise and sophisticated manner. There will be people who can move about and there will be groups” of people who will continue to face more restrictions, the professor added.

He also said governments will have to explain to people how this technology’s privacy protections work.

“The political capital lost as a result of fluctuating and poorly explained decision-making at the start of the pandemic will have consequences later. (Governments) will do a disservice to the modern concept of privacy if they don’t use the data to help the population in this pandemic,” Moro said.