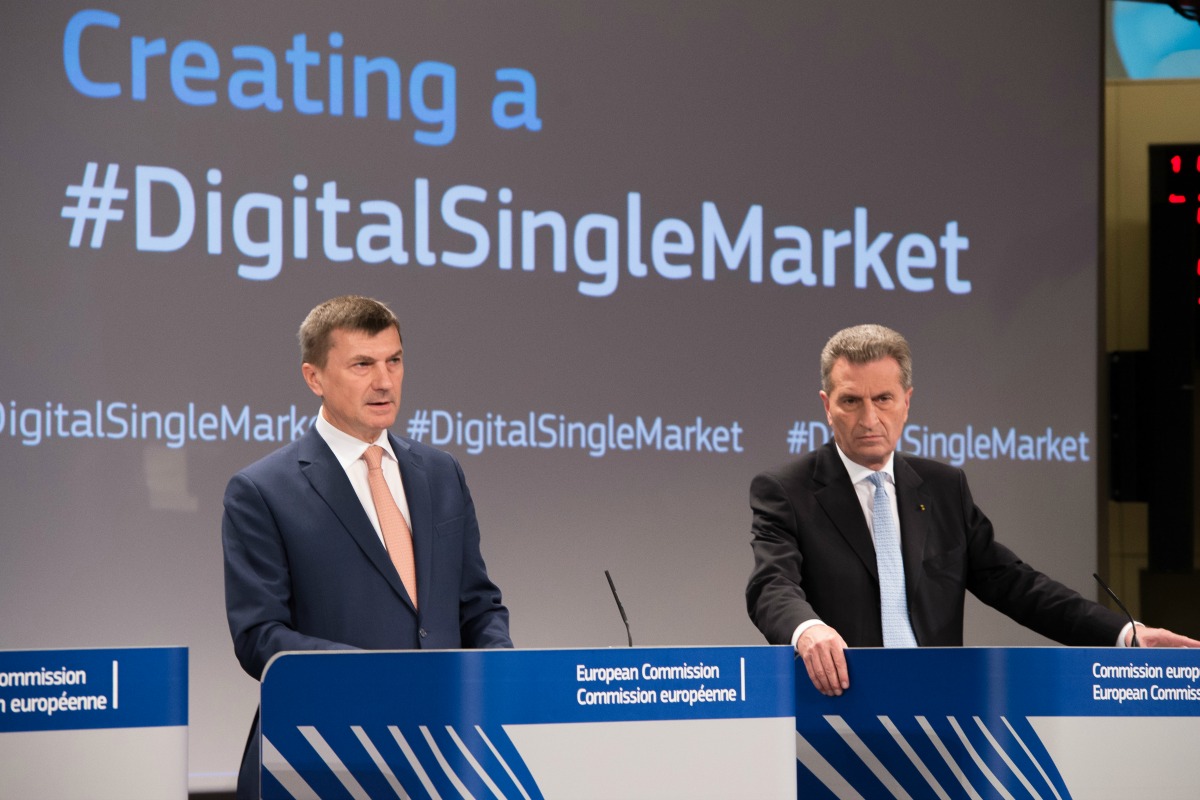 The Commision’s DSM strategy, presented on Wednesday (6 May), addresses spectrum policy, as part of its broader push for new telecom regulations, expected in 2016.

But a key proposal to issue spectrum jointly at a European level could face resistance from member states, which profit from lucrative spectrum auctions.

The Connected Continent strategy introduced by former Commission Vice-President Neelie Kroes originally sought unified rules on spectrum use. But member states in the Council later removed those provisions from the regulation.

The Commission is now coming back with a second, less ambitious attempt, to coordinate the auctioning process for allocating spectrum band, which would continue to take place at national level.

Andrus Ansip and Günther Oettinger, the two Commissioners currently leading on the digital agenda, both acknowledged it would be a challenge to get member states to sign off on common criteria for spectrum auctions.

Speaking at the Digital Single Market announcement in Brussels, Ansip called for “deep cooperation” on spectrum policy, and sought to reassure national governments. “We don’t want to touch member states’ money,” he insisted.

“The member states are still stepping on the brakes, and we think that’s wrong,” Oettinger said of the tug-of-war over spectrum policy.

The Digital Single Market strategy calls European spectrum policy necessary to incentivise investment. Some countries were slow at allocating the 800 MHz band used for mobile communications, and lagged behind in rolling out 4G technology for mobile networks as a result.

To even out those differences and enable a Digital Single Market, the Commission is proposing introducing common rules for the timing of national regulators’ spectrum auctions.

While the DSM strategy mentions the 700 MHz band will be used to expand broadband, it also briefly references the audiovisual industry, generally critical of the plans to repurpose the 700 MHz brand now used for television.

“The Commission will make specific proposals regarding the coordinated release of the 700 MHz band, which is particularly well-suited for ensuring the provision of broadband services in rural areas, while accommodating the specific needs of audiovisual media distribution,” according to the proposal.

Varying conditions that affect spectrum assignment across the EU would also be included in the Commission’s planned rules, including inconsistencies in pricing, areas covered by spectrum and competition regulations focusing on cable network providers. However, the strategy documents do not detail how those rules would be enforced in individual member states.

Calling out those countries that have been slow to introduce spectrum, Ansip told journalists:

Outpacing any EU regulation, Germany’s national telecommunications regulator, the Bundesnetzagentur, will start auctioning spectrum from the 700 MHz band for mobile on 27 May.

Agency president Jochen Homann said earlier this year that Germany will be the first country in Europe to allocate 700 MHz band spectrum for mobile broadband. That frequency, Homann noted, “should notably improve the broadband supply in rural places”.

German spectrum auctions have been outstandingly lucrative. For example, the UMTS auction, fifteen years ago, brought in €50 billion in profits.

The Wider Spectrum Group, which represents the audiovisual and radio broadcasting industry and opposes plans to repurpose 700 MHz band spectrum for broadband, criticised the Commission proposals and called for more consideration of Pascal Lamy's report on spectrum use from last year.

“The temptation to treat and present spectrum policy as a binary technical debate fails to capture the bigger picture and the link with Europe’s creative and cultural industry,” the group said in a statement. “The Group encourages the Commission to look further and advocate the importance of an industrial strategy for Europe’s creative and cultural sector, where long term spectrum policy commitments are recognised as central to supporting investment, media pluralism, citizen viewers / listeners and local jobs and growth.”

“Spectrum is the gateway to a real Digital Single Market,” ETNO said in a statement, calling for “concrete achievements in the area of spectrum harmonisation”.

“Investment in mobile networks should be facilitated by a coherent regulatory landscape, which allows access to all the spectrum needed, appropriate returns and timely deployment. To this end, we also encourage strategic proposals regarding the coordinated release of the 700 MHz band for wireless broadband services.”

DigitalEurope, trade association representing the world's largest IT, telecoms and consumer electronics companies, commended the Commission’s proposal and called for a “Europe-wide approach to spectrum policy and management.”

Radio frequency spectrum is an essential resource for telecommunication services such as mobile telephones, TV and radio broadcasting, satellite and broadband communications.

The digital dividend - spectrum that is freed as a result of the switchover from analog to digital broadcasting - has been hailed in Brussels as a way to boost growth in a highly profitable digital market and bring broadband to remote areas that may not have terrestrial networks.

The European Commission proposed to allocate the 790-862 MHz sub-band to telecoms operators to allow them to exploit the digital dividend. The 800 MHz band ranks among the most valuable freed frequencies, since it travels long distances and through buildings.

But the allocation of spectrum has been marked by intense debate between member states on which services should be prioritised and how countries can conduct spectrum auctions around the same time to make sure the roll out does not create an uneven playing field.

The EU executive has asked stakeholders to give their views on the options proposed in a report presented by former Commissioner Pascal Lamy in September 2014.

The Lamy Report proposed 2020 as a deadline to free the prized 700 MHz band, currently used by broadcasters, for wireless broadband.

Europe has about 100 mobile operators, set against six in the United States and three in China, making for a much more fragmented market.

European companies have also been struggling to pay off debts and build 4G and fibre broadband.