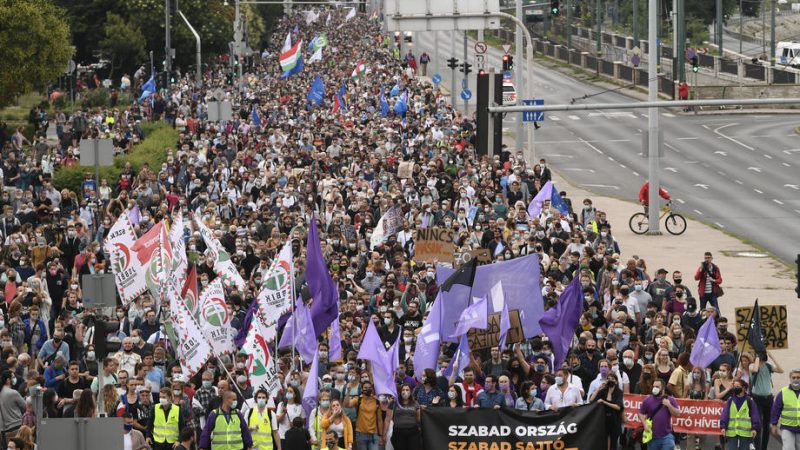 Following the call of the oppositional Momentum party demonstrators march protesting against the dismissal of the editor-in-chief of the Hungarian news website Index.hu, in the streets of Budapest, Hungary, 24 July 2020. [EPA-EFE/ZSOLT SZIGETVARY]

The European Commission is still assessing a complaint over state aid for Hungary’s broadcast sector submitted in 2016, the EU executive confirmed on Monday (27 July) amid continuing criticism of Viktor Orbán’s government for eroding media plurality in Hungary.

The news comes after an exodus of journalists from the independent news platform Index.hu last week, which provoked mass protests in Budapest.

In 2016, a complaint was filed on the alleged excessive funding of public broadcast media in Hungary, with concerns raised by former MEP Benedek Jávor, the news platform Klubrádió, and the Budapest media policy think tank Mérték.

In 2019, a separate complaint was issued by the contingent, on the subject of state aid being offered to media organisations in the county in the form of public advertising.

The Commission is yet to respond to both complaints, despite ongoing threats to the media landscape in Hungary.

“The timing of the assessment of complaints depends on various factors, for example, on the complexity of the case or on the length of the submission, on the number of submissions. So, there’s a number of reasons why a complaint can take more or less time,” a Commission spokesperson said on Monday (27 July).

The Commission applies strict conditions on the funding of public service media in the EU in a bid to avoid financial support “selectively favouring only certain broadcasters and thereby distorting or threatening to distort competition.”

Recent events in Hungary have provoked concern that media freedom is at further risk of erosion in the country, following the dismissal of Szabolcs Dull, editor of the independent media platform Index.hu.

After staff members at the news organization unsuccessfully requested that Dull be reinstated in his post, 70 members of editorial staff walked out. The outlet had previously complained that its media independence was under threat from the government’s increasing influence against them.

In 2018, certain private media outlets were subsumed into the Central European Press and Media Foundation (KESMA), a pro-Orban outfit that comprises over 400 hundred outlets. The organization is headed by current and former associates of the ruling Fidesz party.

Members of the European Parliament have raised concerns at the move, with S&D’s Hungarian MEP, István Ujhelyi describing KESMA as a “propaganda machine that has the task of moving the illiberal state forward and waging a war of liberation on Brussels.”

The creation of KEMSA itself falls outside the Commission’s jurisdiction under the EU Merger Regulation, but EU competition rules could apply.

Meanwhile, an EU official informed EURACTIV on Monday that the Commission’s forthcoming rule of law mechanism, intended to deliver on commitments outlined by President Ursula von der Leyen at the start of her mandate, would seek to foster greater media pluralism in the EU.

The forthcoming EU Democracy Action Plan, the official added, would also include elements aimed at improving media sustainability for independent outlets in the EU.

Following the European Council’s recent landmark agreement on a €1,074 billion long-term budget and recovery fund instrument last week, talk in Brussels had centered around the extent to which conditionality rules could be attached to the obtaining of funds.

The Council conclusions state that a rule of law conditionality regime will be conceived by the Commission in due course, to later be approved by member states.

Hungary is currently being subjected to an Article 7 procedure, launched for a potential breach of EU values due to concerns over the country’s judicial independence, freedom of expression, and its treatment of migrants. Should rule of law conditions be attached to member states’ ability of obtain EU funds, Hungary could be at risk.

Pressed by EURACTIV on whether the forthcoming conditionality regime for EU funds could include criteria for media plurality, a Commission spokesperson however could not confirm that such a possibility could be in the offing.

A statement by the group released today did not specifically address the ongoing threats to media freedom in Hungary but it made due reference to the democratic relevance of maintaining media plurality worldwide.

“Media independence is a cornerstone of informed, healthy democracies and central to the values of public broadcasters, which also include accuracy, accountability, impartiality, the highest standards of journalism, and the commitment to serve the interests of all audiences everywhere,” the statement read.