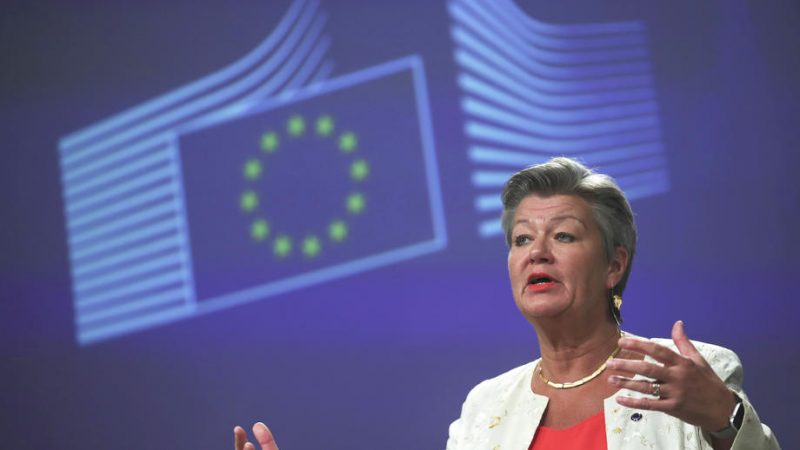 European Commissioner for Home Affairs Ylva Johansson listens to a question during an online news conference with European Commissioner for Promoting our European Way of Life Margaritas Schinas at the EU headquarters in Brussels, Belgium, 24 July 2020. Worried by an alarming spike in child sexual abuse in recent years and during the coronavirus pandemic, the European Commission unveiled plans Friday to create a European center to prevent mistreatment and introduce legislation requiring online platforms to report inappropriate material. [EPA-EFE/FRANCISCO SECO / POOL]

The European Commission will propose legislation later this year and in 2021 that will force online platforms to undertake measures to stop the spread of online child abuse, the EU’s home affairs chief Ylva Johansson announced on Friday (24 July).

“We are going to present legislation to make it mandatory for Internet companies to detect, report, remove and refer,” instances of online child abuse, she told reporters on Friday (24 July), as part of an unveiling of the Commission’s new security strategy.

The new moves come as part of a two-pronged process.

As part of rules under the EU’s Electronic Communications Code that comes into force in December, the scope of the 2000 e-Commerce Directive will be broadened, having the effect of preventing certain companies from continuing their own measures on the voluntary detection, removal and reporting of child sexual abuse online.

“The Commission considers that it is essential to take immediate action to address this. It will, therefore, propose a narrowly-targeted legislative solution with the sole objective of allowing current voluntary activities to continue,” said the strategy, published on Friday.

Following this initiative, the Commission will put forward further legislation in the second quarter of 2021, to oblige online service providers to “detect known child sexual abuse material and require them to report that material to public authorities.”

In a further attempt to double down on the dissemination on online child sexual abuse, Johansson also floated the idea of creating a new European centre to prevent and counter child sexual abuse, with a number of responsibilities including proactively searching online content and notifying companies of potential illegalities at play.

However, the executive is also cognizant of the technical barriers that could get in the way in this regard, stating that end-to-end encryption can “facilitate the access to secure channels for perpetrators where they can hide their actions from law enforcement.”

Solutions, therefore, have to be found that would allow companies to detect and report online abuse in end-to-end encrypted electronic communications, the Commission states.

In terms of current figures, Johansson noted that around 80% of reported online child abuse material comes from the Facebook messenger application, and she praised the platform for its high detection rates.

More broadly, EU estimates show that one in five children in Europe has been subjected to some form of sexual violence, a problem that has been exacerbated as a result of the coronavirus lockdown for children living with abusers.

Moreover, research from Europol has found that the coronavirus pandemic correlates with the increased sharing of abuse images online.