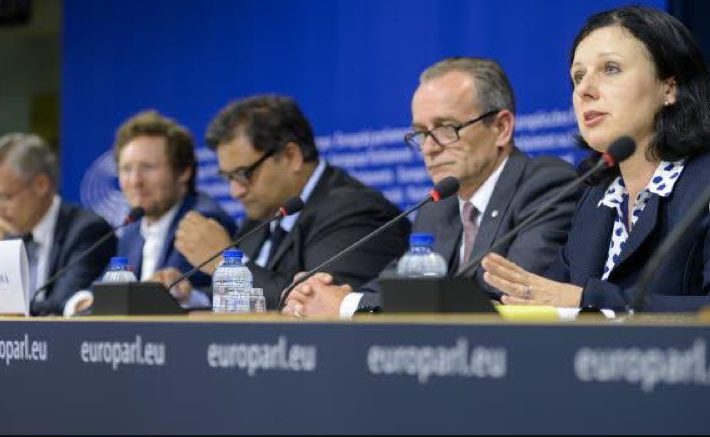 EU lawmakers sat down for their first meeting yesterday (24 June) to work out details on the EU’s data protection reform. Facing bumps ahead, negotiators said they were still committed to wrapping up the legislation package this year.

The first round of so-called trialogue talks between the European Parliament, Commission and Council took place in Brussels yesterday.

Eight more meetings are planned until October, when the three EU lawmaking bodies said they expected to agree on a general text.

“It’s a very clear date,” said Luxembourg’s Minister of Justice Felix Braz after Wednesday’s meeting. “It’s known, it’s public and we need a general approach by that date, otherwise it will be almost impossible to finish by the end of the year,” Braz said.

Luxembourg will take over the six-month rotating EU Council presidency from Latvia at the end of this month.

Parliament, the Commission and the Council have signalled in recent weeks that compromise isn’t far away. But divisive issues still need to be ironed out, such as the processing of personal data for reasons other than what users agree to and sanctions against companies that break rules.

Jan Philip Albrecht, a German Green MEP who is rapporteur for the reform in the European Parliament, said on Wednesday, “I’m very confident that on the basis of all three texts available we will reach the level of data protection enshrined in the 1995 directive. I don’t see a real danger of not meeting this demand.”

The European Council cut a deal of its own at a meeting of home and justice ministers last week.

But some member states voiced their reservations. Countries that host large data-reliant companies have resisted to the planned laws, arguing that strict rules would cripple businesses by plugging their ability to profit off big data.

On Tuesday (23 June), heads of state from eight EU countries sent a letter to European Council President Donald Tusk, making the case for a light touch on regulation in the tech sector.

The appeal came just ahead of today’s Council summit in Brussels, where the Commission’s digital single market plans are on the agenda.

Tech giants including Google and Facebook are headquartered in Ireland, which signed off on the letter seen by EURACTIV.

Ireland teamed up with the UK, the Netherlands and other leaders to stress the financial gains of big data.

“The data associated with this digital revolution is the new currency of the global economy, and data-driven innovation is the new frontier of global productivity growth,” the letter reads.

Some of the countries that signed have pushed back on recent data reform proposals they see as hampering businesses.

Member states’ objections could pose a threat to the negotiations on the data protection regulation. The European Council’s draft proposal going into trialogue talks has already drawn criticism for leaving too many details up to member states’ discretion.

Paul Nemitz, director of the Fundamental Rights unit at DG Justice, told EURACTIV last week that it can be a good thing if member states have room to implement the regulation more loosely.

“It is true that the regulation contains a number of provisions which provide flexibility to member states,” Nemitz said.

“But we’re confident that this flexibility will be used, if at all, in good compliance with the law. And we do believe that the regulation will be working well from the first day, whether or not these flexibility rules have actually been used.”