“Europe’s digital ambitions cut by bickering member state leaders. Other continents will be delighted that Europe doesn’t strive to be a digital leader.”

MFF/RRF. EU leaders reached a ‘historic agreement’ earlier this week on the new multi-annual financial framework and the recovery and resilience fund. However, in order to achieve these new agreements, substantial cuts have been made to the bloc’s various funding programs, including in the digital fields.

This week, we crunch the numbers in detail and also look at the other big stories in EU politics and policy, in the tech patch.

MEPs were quick to lament the cuts to various EU digital programs, following an agreement on the EU’s new multi-annual financial framework (MFF) and the recovery and resilience fund (RRF).

In the digital domain, there are three frameworks worth analysing: Horizon Europe, Digital Europe and the Connecting Europe Facility Digital branch.

We’ve followed the changes over recent months, looking at the numbers in comparison with the previous MFF, in addition to how they stack up against previous Commission proposals.

Horizon Europe is the bloc’s research and innovation funding framework and while there has been an increase from the previous MFF, some will question whether it is sufficient in a radically new global context. However, the plan also comes in for a €5bn increase under the recovery fund.

The Connecting Europe facility is designed to foster an “up-to-date, high-performance infrastructure to help connect and integrate the Union and all its regions, in the transport, energy and digital sectors.”

In terms of the digital branch of the programme, the recovery fund will not contribute anything, but the MFF allocation is doubled from the previous long-term budget. The figures are, however, very small when analysed in the context of other comprehensive infrastructure programmes, including China’s Belt and Road initiative, which has plans to enter the EU through Italy.

Digital Europe will invest in key strategic digital capacities such as the EU’s high-performance computing, artificial intelligence and cybersecurity. Under the previous MFF, the funding allocation was only €169m. Despite being reduced from the Commission’s May 27 proposal of €8.2bn, the new figures are still considerably higher than the previous MFF, with the programme receiving €6.76bn.

Meanwhile, in terms of funding the recovery, the European Council has put forward several ‘own resources’ proposals, which include a levy on digital giants – an option very amenable to European Parliamentarians. In the Council conclusions, EU heads of state tasked the Commission with coming up with a new proposal on the Digital Tax in Q1 2021, should there be no international agreement by that date.

However, EU efforts could be stymied in this respect by the fact that agreements in this field require unanimity in the Council, which thwarted progress last year on the digital tax plans presented by the Commission.

Attempts to introduce a bloc-wide digital services tax faltered following opposition led by Ireland, Finland and Sweden to a planned 3% levy on companies earning €750 million in revenue, €50 million of which would need to be EU taxable revenue. For its part, Parliament has long supported the idea of a digital services tax. 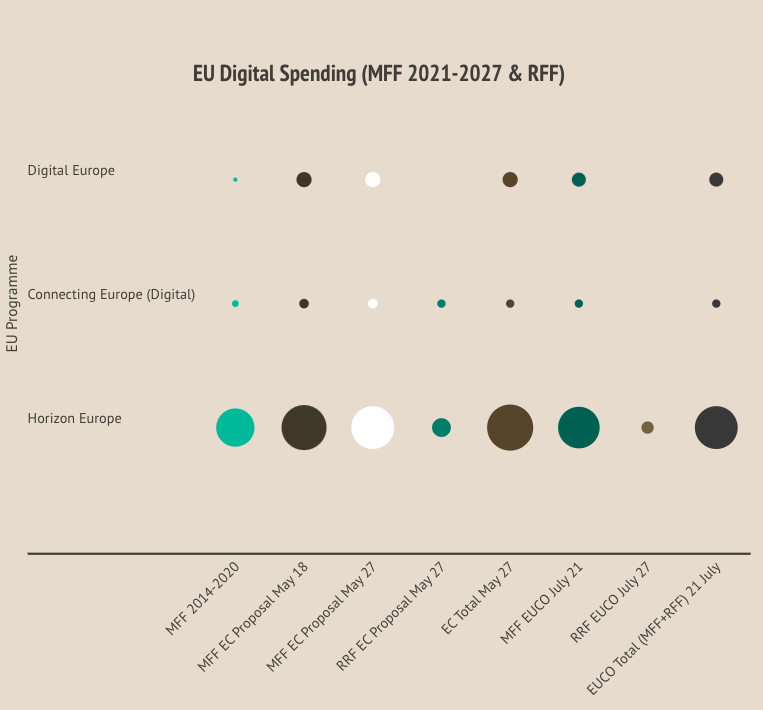 French Digital tax momentum. Continuing with the Digital Tax, French President Emmanuel Macron told French TV that he envisages an EU-wide digital tax on big tech multinationals, along the lines of a digital tax, which France plans to impose this year.

Macron’s comments on Tuesday (21 July) come after he backed down earlier this year on levying hefty taxes on some of Silicon Valley’s biggest names in January, following US President Donald Trump’s tariff threats, reports Anne Damiani.

Slovenia Digital Tax support. Slovenian PM Janez Janša also said he sees a digital tax as the EU’s best resource. “Subsidies will have to be repaid. One of the major shifts is contained in these few words, which speak of the EU’s own resources, because in seven years time, when we negotiate the next budget, this will be a key thing,” Janša said on Tuesday (21 July).

He highlighted digital taxation as probably the EU’s biggest potential ‘own resource’ in the future and said that taxation of emissions and plastics is a problem for those countries that have already included these resources in their national tax policy. Read more here from Zoran Radosavljevic.

Microsoft complaint. Work-communications platform Slack has filed a competition complaint to the European Commission against Microsoft, which stands accused of tying in its Teams products into its ‘market-dominant’ Office productivity suite, at the disadvantage of rival Slack products.

For their part, Microsoft suggested that Slack’s complaint may be due to a sense of bitterness over their lack of video-conferencing software to offer consumers. “With COVID-19, the market has embraced Teams in record numbers while Slack suffered from its absence of video-conferencing,” a Microsoft spokesperson said. “We’re committed to offering customers not only the best of new innovation but a wide variety of choice in how they purchase and use the product.”

Italy Amazon-Apple probe. An antitrust investigation has been launched in Italy, investigating where Apple and Amazon have been conducting anti-competitive practices as part of the sale of Apple products and Beats headphones, Reuters reported.

Huawei in France. French authorities have told telecoms operators planning to buy Huawei 5G equipment that they won’t be able to renew licences for the gear once they expire, effectively phasing the Chinese firm out of mobile networks, three sources close to the matter said.

Netherlands. Dutch Ministry of Economic Affairs & Climate Policy has announced the completion of the country’s 5G auctions, with mobile operators KPN, VodafoneZiggo, T-Mobile Netherlands all with winning bids to take part in the country’s 5G frequencies.

Luxembourg. Four operators in Luxembourg – Orange, Post, Proximus, and Luxembourg Online have secured 5G frequencies for the next 15 years, after bidding a total of €41 million, the Luxembourg Regulatory Institute said earlier this week.

Monitoring media pluralism in the digital era. It is of the ‘utmost importance’ for the EU to do more to reign in the unregulated environment of online political advertising by establishing more stringent transparency obligations, said a  European Commission-backed report on media plurality, published on Thursday (23 July).

Chairman of the EURACTIV Fondation Think Tank, Christophe Leclercq, welcomed the report, saying that more needs to be done to combat government influence and the concentration of media in the hands of oligarchs. “In my view, this report will help shift EU policy from fact-checking media to rebalancing the overall information ecosystem,” he said.

Dull was booted off the Index’s management board for publicly warning a month ago of a planned overhaul that would jeopardise editorial freedom and setting the website’s internal independence barometer to amber alert. EURACTIV’s Vlagyiszlav Makszimov has more details.

Daphne Caruana Galizia trial. The self-professed middleman in the murder of Maltese journalist Daphne Caruana Galizia, Melvin Theuma, has been left unable to speak after being found on Tuesday night with knife wounds to his neck and torso area. Police believe the damage to be self-inflicted. On Tuesday, Theuma had given evidence against businessman Yorgen Fenech, who has been accused of conspiring in Caruana Galizia’s murder.

Russian Meddling. British lawmakers slammed the government on Tuesday (21 July) for failing to look into possible Russian meddling in UK politics, particularly the divisive 2016 Brexit referendum, as they released a long-awaited report into the issue.

EESC on biometrics. Biometric recognition for tracking, surveillance and detecting emotions “should have no place in Europe’s human-centric approach to Artificial Intelligence (AI),” the European Economic and Social Committee (EESC) says in its response to the European Commission’s White Paper on AI, adopted by the EESC plenary on July.

TikTok US pushback. Under a new billed that passed a U.S. Senate Committee on Wednesday, federal staff would be barred from using China’s TikTok application, Reuters reported.

Australia investigation. Australia’s government will launch an investigation into Chinese platforms Tiktok, WeChat and Weibo, in a bid to identify whether the companies are forced to hand over data to the Chinese state, the Sydney Herald reports. Prime Minister Scott Morrison said the Australian government was monitoring TikTok “very closely.”

Twitter QAnon ban. Twitter said earlier this week that it would permanently suspend accounts that violate its policies and tweet about the far-right conspiracy theory ‘QAnon,’ which stipulates that there is a ‘deep state’ plot against US President Donald Trump.

Committee vote. A Legal Affairs Committee vote on S&D MEP Tiemo Wölken’s report on the Digital Services Act is due to take place on September 29, with a view to going to plenary in October.

Apple. The US tech giant Apple, plans to bring its entire carbon footprint to net-zero by 2030, 20 years sooner than Intergovernmental Panel on Climate Change targets, the company announced.

GDPR impact assessments. Impact assessments must be undertaken to assess the efficacy of coronavirus contact tracing apps before their deployment in order to safeguard users, the Standing Committee of European Doctors (CPME) has said. Natasha Foote reports.

Digital future. The coronavirus pandemic has forced us to move more of our lives online faster. But is this for the better? What should we take with us from our lockdown experiences, asks Renew MEP Dita Charanzová.

The comments are the latest criticism of BaFin, as many have wondered how the agency had overlooked the €2 billion missing from Wirecard’s balance sheets. Scholz’s proposals hit directly on this question, as he called for improving BaFin’s auditors. EURACTIV Germany’s Sarah Lawton looks into what else was said.

Data criminality. More than one in two citizens of the European Union are concerned about the misuse of their online data by fraudsters and cybercriminals, a new EU study has found.

The news comes ahead of the publication of the Commission’s Security Union Strategy, which is due to be presented by the Commission on Friday (24 July) and will include efforts to bolster the EU’s resilience against online security threats.

ICO report. The UK’s data protection authority, the Information Commissioner’s Office, has published its annual report for 2019-20. The authority notes that it took regulatory action 236 times in response to breaches of the legislation, which included 54 information notices, eight assessment notices, seven enforcement notices, four cautions, eight prosecutions and 15 fines. In total, over 2,100 investigations were conducted.

The Commission is due to present its Security Union strategy tomorrow, which is set to feature measures to clamp down on cybercrime and online abuse.