The takedowns came following a discovery by the human rights group Avaaz, in which it uncovered far-right disinformation networks in France, UK, Germany, Spain, Italy and Poland, posting content that was viewed an estimated 533 million times over the past three months.

EURACTIV Digital went to investigate further and paid Avaaz a visit at their recently opened ‘Citizens’ War Room’ in Brussels (pictured below). 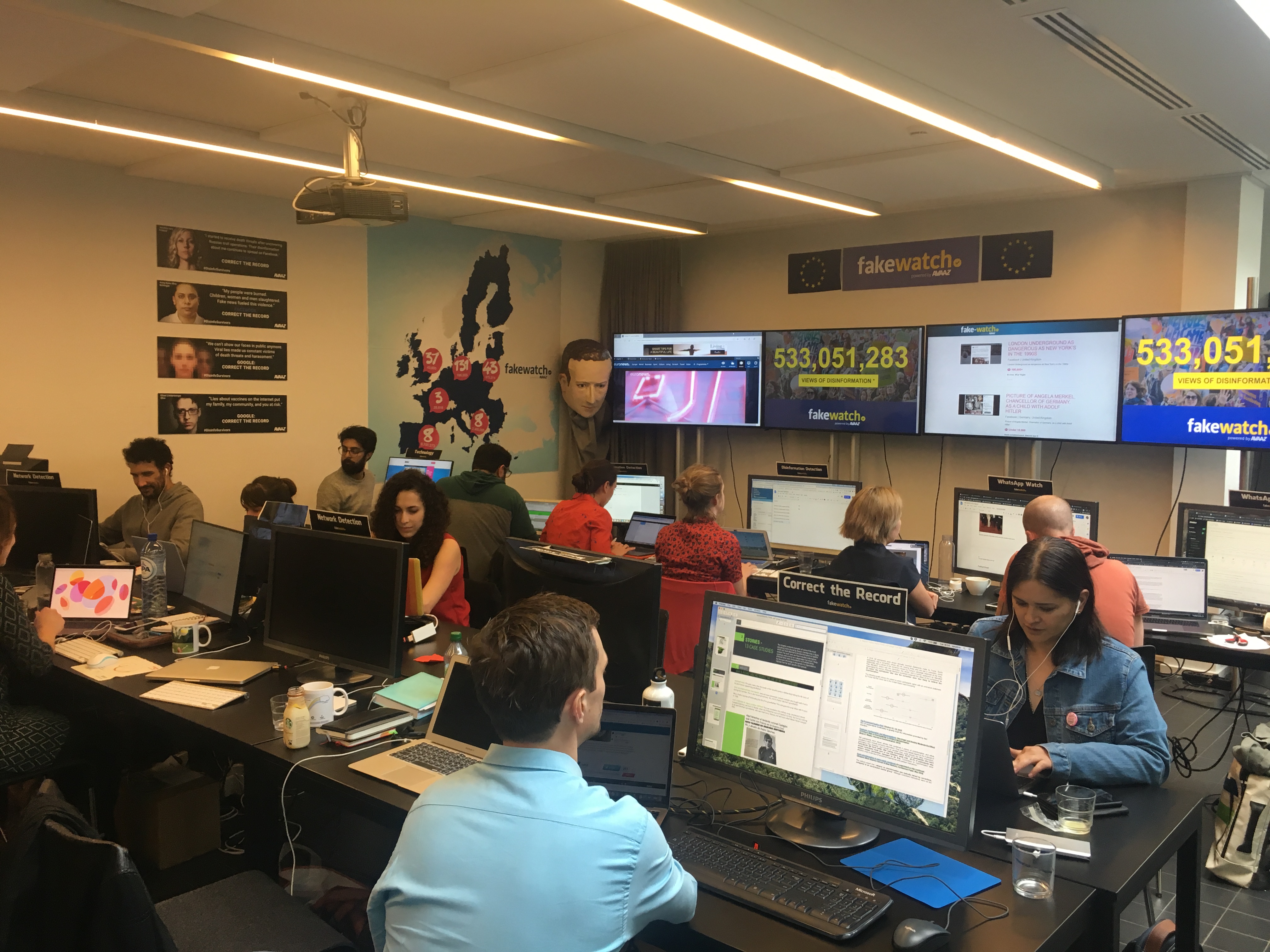 At the site, around 20 activists diligently scan the social networks for evidence of disinformation networks. “What shocks me is that of the pages that Facebook has already taken down, the content on these pages had already been viewed around 500 million times,”  Avaaz Campaign Director Christoph Schott told EURACTIV, adding that the sources of disinformation analysed were all “homegrown,” emanating from Europe.

One of the most pressing issues, Schott revealed, was the tactic of creating duplicate accounts in order to amplify political messages. In such cases, perspectives that would normally be considered extremist would enter into the political mainstream by way of amplification through the use of duplicate accounts.

Also this week, in a study on what they call ‘junk news’ the Oxford Internet Institute’s research was more promising. The group found that fewer people across Europe share ‘junk news’ from smaller publishers, compared to those emanating from larger news networks.

Another area where Facebook has traditionally been under the microscope is data protection. With Saturday marking the one year anniversary of the GDPR, Justice Commissioner Vera Jourová urged on Tuesday member states Greece, Slovenia and Portugal to get their act together in implementing the new rules.

When EURACTIV pressed Jourová as to how quickly the Commission would want to see the countries step in line, Jourová said: “as soon as possible.”

From the business sector, Microsoft weighed in on GDPR’s first birthday earlier this week, praising the benefits of the regulation for EU citizens.

Ireland’s Data Protection Commissioner, Helen Dixon, also made headlines earlier this week, after claiming that children have a better grasp of data protection than adults.

Meanwhile, Huawei continues to face setbacks in the West. Both Panasonic and the chip designer ARM have cut ties with the Chinese firm, following mounting pressure from the American government, amid the US-China trade dispute.

For their part, Huawei presented itself as a victim of US “bullying” on Tuesday, with the company’s EU chief, Abraham Liu, saying that the US founding fathers would be “alarmed” by the recent actions of the Trump administration.

In other news, Euractiv Germany’s Alicia Prager sat down with the President of Reporters Without Borders Austria, Rubina Möhring, to discuss the effects of the controversial ‘Ibiza video’ that plunged the Austrian government into crisis, and why the country is worryingly getting closer to the Hungarian media model.

Meanwhile, EURACTIV’s Lucia Yar reported on the OECD ministerial meeting in Paris earlier this week, chaired by Slovakia. At the first day on Wednesday, the OECD Principles on Artificial Intelligence were adopted, becoming the first international standards agreed by governments for the responsible stewardship of trustworthy AI.

Artificial Intelligence has also hit the headlines this week in Greece, where the technology could be seen as a development instrument in the country, according to a new study. Theodore Karaoulanis has more here.

Staying in Greece, at the recent Microsoft International Forum in Athens, legendary chess-player Gary Kasparov said that machines will not replace people but great possibilities will rise if both work together.

On My Radar
After recovering from the EU elections, next week I’ll be going along to the EU DisinfoLab Annual Conference, where we may get a better insight into how persuaded citizens were by the swathes of fake news hitting their screens during the campaign.

Join us in Brussels on June 5, for our stakeholder workshop on AI and Ethics, and how facial recognition technologies fit into the mix.

Also, stay tuned for a high-level event on Media Policy presented by Fondation EURACTIV, coming up towards the end of June at the European Parliament.