The centre-right EPP have made a last-ditch attempt to narrow the scope of the EU’s proposed Digital Services Tax, in a move that would see streaming services such as Netflix excluded from the proposals. EURACTIV also understands that a contingency of MEPs from the S&D, the Greens and GUE/NGL have proposed to raise the DST rate from 3% to 5%.

The amendments were tabled before 19.00 on Tuesday evening (11 December) and debated by MEPs in an exchange at the European Parliament’s hemicycle on Wednesday evening (12 December).

Parliament is set to vote on the plans on Thursday (13 December).

There are two digital tax proposals on the table. The first is seen as an interim measure, and attempts to ensure that the revenue generated by user activity for certain digital services are taxed appropriately. The second plan vies to reform tax bases in the context of digital services.

Speaking to EURACTIV, Rapporteur for one of the digital tax files, Socialist Paul Tang said: “We had an agreement in the Economic and Monetary Affairs committee that we would include online streaming services under the scope of the tax, this attempt to disrupt our plans is not fair to European citizens, who broadly agree with the scope of the measures.”

Moreover, as EURACTIV reported in October, there had been an appetite amongst some MEPs to increase the levy from the commission’s original 3% proposal to 5%.

On Wednesday, Tang highlighted the need for this to happen, following recent polls that show how much of an important issue digital tax measures are to EU citizens.

“I have never seen a tax proposal with so much wide public support,” Tang told EURACTIV.

“Usually with tax proposals, you see a fairly clear distinction between the political right and left. In this case, there is public support across the political spectrum.”

Currently, the Commission’s plan includes the obligation for tech firms to pay a 3% levy on revenues where such money is generated, rather than where the companies are domiciled for tax purposes.

MEPs only play a consultative role on tax legislation, as any decision on such matters must ultimately be agreed by unanimity in the council. However, some MEPs in the hemicycle on Wednesday floated the idea that qualified majority voting should be put into practice for this file, rather than unanimity, due to the importance of the legislation to EU citizens across the continent.

“What we try and do, as the European Parliament, is build political and public pressure, not just in this house but also outside this house,” Tang said.

In the Council, Ireland, Sweden, Denmark, and Finland, have been some of the most vociferous opponents to the plans.

But, Tang said, with broad support from member states, Ireland, which plays host to a number of tech giants including Google, Facebook, Adobe, LinkedIn, Apple and AirBnB, could not hold out forever. 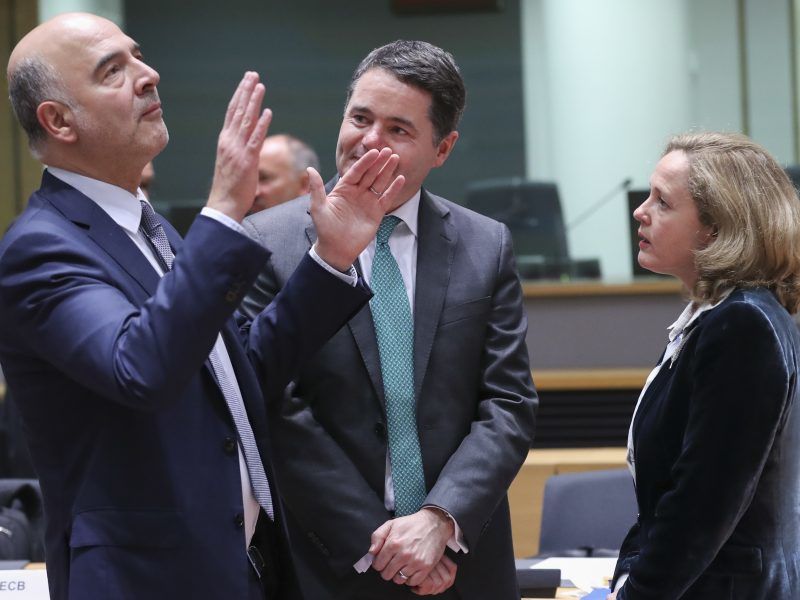 EU finance ministers remain divided over a raft of issues in the European Commission’s digital services tax (DST) plans after a meeting on Tuesday (6 November) drew attention to a plethora of challenges in reaching a consensus.

During a meeting of EU finance ministers last week, France and Germany presented revised plans that would significantly watered-down the strength of the digital services tax. Their plans would see large firms paying a levy only on advertising sales and not on total revenues, a substantial reduction of the Commission’s original scope.

France’s finance minister seemed to strike a conciliatory tone. “Had I been alone, I would have gone further,” he said at the meeting.

“We have to make progress at some stage. I have made concessions to Germany.”

However, S&D’s Tang is not satisfied with Le Maire’s backtracking. “I would have wanted Le Maire to be more determined on this issue,” he said.

“He started off well, but has since watered down his proposals, settling for a mere symbolic gesture.”

In October, US authorities criticised the EU’s plans to introduce a ‘digital tax,’ describing the measures as discriminating ‘against US companies’ in a letter penned to European Council president Donald Tusk and Commission President Jean-Claude Juncker.

“The EU DST proposal has been designed to discriminate against US companies and undermine the international tax treaty system creating a significant new transatlantic trade barrier that runs counter to the newly launched US and EU dialogue to reduce such barriers,” the letter, jointly signed by Republican chairman Orrin Hatch and his Democratic counterpart Ron Wyden, reads.

The communication prompted Denmark’s Minister of Finance Kristian Jensen to say that the DST plans were “aimed at one specific country” and that EU policymakers should take into account the opinions and perspectives of US counterparts, during a meeting of EU finance ministers in November.

During the debate in Parliament on Wednesday, rapporteur for the second digital tax file, the EPP’s Dariusz Rosati responded to concerns that these were distinctly anti-US measures.

“They are on the top because they make all their profits outside the US. We want to resotre elementary fairness and transparency in the tax system, this is out main goal.”

“Google and Facebook use our markets and our customers, and they don’t pay their fair way. We want to correct this mismatch.”

“It’s not Christmas time for Facebook and Google. It’s time for them to pay their fair share.”