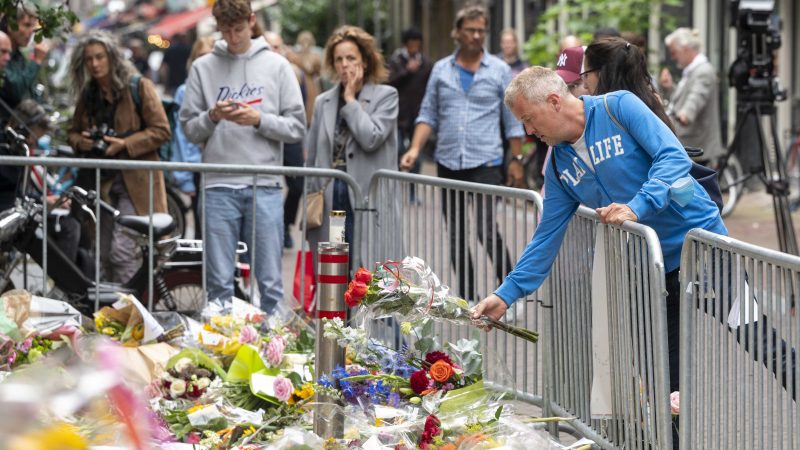 People mourn and lay down flowers for Peter R. de Vries at the back of the Lange Leidsedwarsstraat in the center Amsterdam, The Netherlands, 15 July 2021. According to a statement of the family, Dutch crime journalist Peter R. de Vries has died after being shot in Amsterdam on 6 July 2021. [EPA-EFE/EVERT ELZINGA]

Celebrity Dutch crime reporter Peter R. de Vries has died just over a week after being shot in a busy Amsterdam street, his family and his employer RTL Netherlands said on Thursday (15 July), prompting an outpouring of grief and anger at home and abroad.

De Vries, 64, was well-known for his television programmes, in which he often worked with victims’ families and tirelessly pursued unsolved cases. He had received threats in the past from the criminal underworld in connection with his work.

Two men who were arrested on a highway shortly after the 6 July shooting, one of them a Polish national, remain in custody as murder suspects. 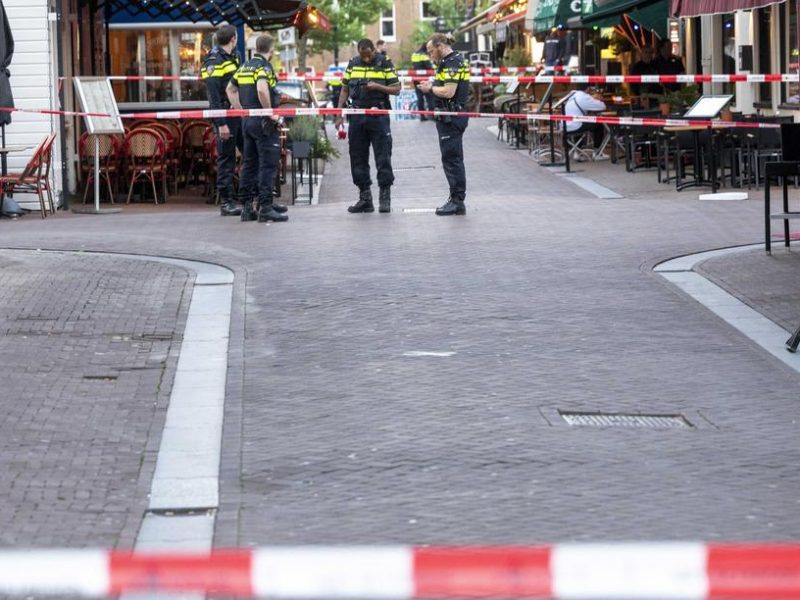 Dutch crime reporter Peter R. de Vries, known for his work in exposing the criminal underworld, has been left fighting for his life after being shot on an Amsterdam street, officials said on Tuesday.

“Peter fought till the end but wasn’t able to win this battle. He died surrounded by the people who loved him,” his family said in a statement published by RTL Netherlands.

“He lived true to his motto: On bended knee is no way to be free.”

Dutch Prime Minister Mark Rutte vowed to track down whoever was behind the shooting of a man he described as a determined and fearless reporter. The head of the European Commission, Ursula von der Leyen, said more must be done to protect investigative journalists.

After hearing of his death, people gathered to lay flowers at the scene of the shooting, Dutch news agency ANP reported.

Global media watchdog Reporters Without Borders (RSF) said De Vries’ death showed Europe was “failing to protect its journalists. There has been a distinct worsening since 2017,” RSF spokeswoman Pauline Ades-Mevel.

In 2017, Maltese investigative journalist Daphne Caruana Galizia was killed in a car bomb. In 2018, a Slovak journalist and his girlfriend were shot dead at home, as was a Greek reporter, near his home, in April.

In his tribute to De Vries, Rutte said: “This act of cowardice cannot go unpunished.”

Justice Minister Ferd Grapperhaus said an investigation would examine whether the government had provided the reporter with proper security.

De Vries won an international Emmy Award in the current affairs category in 2008 for his work investigating the 2005 disappearance of US teenager Natalee Holloway in Aruba.

At home he was known for his work on numerous cases, including the 1983 kidnapping of beer magnate Freddy Heineken.

In 2013 Willem Holleeder, one of the Heineken kidnappers, was convicted of making threats against De Vries, who had helped police in murder cases which ultimately led to a life sentence for Holleeder.

In 2019 Ridouan Taghi, currently on trial for murder and drug trafficking, took the unusual step of making a public statement denying reports that he had threatened to have De Vries killed.