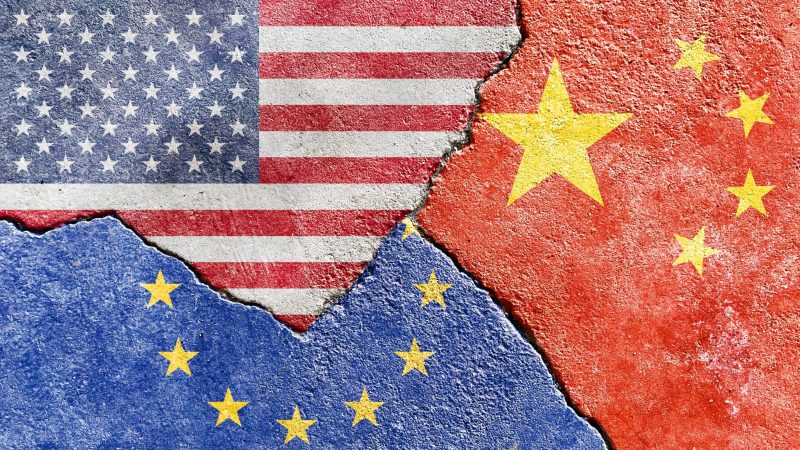 The EU-US Trade and Technology Council is a transatlantic platform to address global tech issues. [Shutterstock]

In the aftermath of their inaugural summit, business and political leaders from the EU and the United States reiterated their call for curbing the growing Chinese influence on the tech sector, although important differences still remained in the regulatory approaches.

The first meeting of the Trade and Technology Council that concluded on Wednesday (29 September) was an initial attempt by the United States and the European Union to converge on the key technology areas that are seeing growing supremacy of China.

“EU and the US will never agree on every single detail. But we are bound by common values, economic interests and strategic challenges,” Slovenia’s Minister for Digital Transformation, Mark Boris Andrijanič, said at the annual forum of the Center for European Policy Analysis (CEPA).

On a similar note, Estonian Prime Minister Kaja Kallas argued that the two blocs need to respond to China’s Road and Belt initiative with an infrastructural plan based on shared democratic values and protection from infiltration, pointing to the OECD Blue Dot Network as a successful model.

“We should use Trusted Connectivity as a global brand,” Kallas said. “By setting the rules of the game, democratic governments can facilitate trust, investments and innovation.”

The importance of transatlantic convergence on technology was reiterated by Greece’s Minister for Digital Transformation Kyriakos Pierrakakis because “cooperation is a necessary ingredient on all aspect of this [digital] agenda.”

However, for Google’s former CEO Eric Schmidt, there is a concrete risk that the West might fall permanently behind China if it clips the wings of innovation. Schmidt in particular pointed to Europe’s regulatory agenda, arguing it fails to take economic growth into consideration.

“This lead with regulation is dangerous. European tech companies are going to become regulated regional champions. They will not drive global platforms and that’s where the game is won,” Schmidt told the CEPA forum.

The warning against the risk of overregulating the tech sector was echoed by Markus Villig, CEO of Bolt. “In regulation, you need to be very surgical about what you’re trying to achieve. And talking about tech regulation broadly, it is usually not very helpful,” he said.

Schmidt noted that the West is already largely behind China in the race for 5G connectivity, which might enable the Asian powerhouse to play a defining role in the next generation of emerging technologies. “The problem with when you lose in a network effect business is once you start to lose, it’s very difficult to catch up,” Schmidt added.

AI a case in point

For Schmidt, the EU’s Artificial Intelligence regulation is the ultimate representation of Europe’s bias toward regulation, which might put the Old Continent on the back foot in the key technological races on AI-powered software.

By contrast, for European leaders such as Margarete Schramböck, the Austrian federal minister for digital and economic affairs, Europe’s regulatory efforts are intended to put people at the centre of this emerging technology.

“Artificial Intelligence is completely new to us. It will change the world but I want to emphasise that human beings should always be in the centre of these developments,” Schramböck explained.

Spain is going a step further in this sense, as Secretary of State Carme Artigas anticipated the launch of a charter of digital rights that will include specific provisions on AI, for instance, the right not to be discriminated by an algorithm.

Slovenia’s Andrijanič recognised that Europe has been lagging behind the US and China in terms of economic dynamism and technological development. However, he pointed to the EU’s efforts as “a historic opportunity not only to become the regulatory leader in the digital arena but also to establish itself as the winner of the global AI race”.

Schmidt disagreed with this assessment. “It seems to me that the third prize in the competition is you become the regulator. And in my world, first and second are the only positions that matter,” he added.