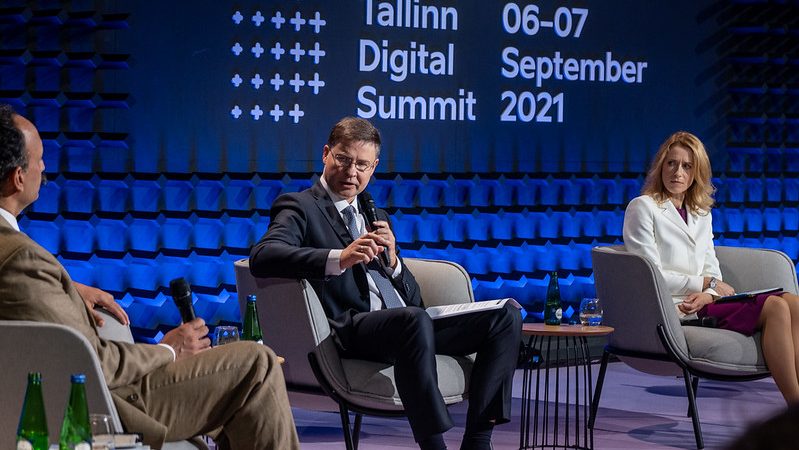 “We are in a much better place to set international standards, if we are combining our efforts and work together,” European Commission Vice-President for Economy, Valdis Dombrovskis stated. [Aron Urb]

The European Union and the US are pushing for a trusted connectivity approach to ensure that the exponentially rising global demand for digital and physical infrastructure is shaped by democratic values, in the midst of a trade and ideological clash with China.

By providing safe, trustworthy and transparent connectivity informed by democratic values, the West hopes to provide an answer to the growing influence of autocratic governments.

“They are not waiting for us. Their connectivity offers are already on the table, according to their economic and political interests. So we need to up our game,” he said.

The threat of “being overtaken” by autocracies, Estonian Prime Minister Kaja Kallas added, is looming over the transatlantic community, as the economic balance is tipping in the favour of autocracies.

Although leaders at the Tallinn summit did not explicitly single out China, the message was clear.

Spearheaded by its multi-billion-euro Belt and Road Initiative, China is investing substantially across the globe to expand its influence.

US President Joe Biden already tried to rally the G7 nations behind him to counter China’s growing influence in developing countries by urging democratic nations to offer an alternative to the Belt and Road Initiative.

This alternative, it seems, is taking shape in the form of the Build Back Better World (B3W) Partnership, announced during a G7 summit in June.

The aim of the B3W is to reinforce the footing of democratic countries in the developing world and to ensure that the future of the Global South is underpinned by democratic values such as transparency, sustainability, and good governance standards.

The EU has also stepped up efforts to ensure that Europe gets its piece of the cake in the race to meet the global infrastructure demand, estimated at €33.8 trillion.

US Secretary of Commerce Gina Raimondo stressed the importance of the transatlantic project for “setting the rules cannot be left to autocratic governments.” The EU and the US have to “show the world that we can solve problems across the Atlantic,” she added.

The EU is currently working on a new ‘Connectivity Strategy’ that should be released in the coming months.

“Europe must strive for more influence, and less dependence. That applies both to our digital strategy and our geopolitical strategy,” Michel emphasised and added that what Europe needs is a connectivity strategy that is “anchored in our values and reflected in our standards.”

The strategy follows a conclusion by EU foreign ministers in July, who called on the European Commission to work on an instrument to promote the EU’s values abroad and to promote its interest via a series of high impact and visible projects and actions globally.

The Atlantic Council estimates that with improved coordination and prioritization between democratic states these initiatives could amount to between €422 and €844 billion.

Raimondo outlined that it is not “just about money.” While investments in the low- and middle-income world are crucial, it is equally important to set standards and guarantee regulatory interoperability.

While the investment strategy of autocratic states disregards values such as sustainability, climate or human rights, the transatlantic community could ensure that these values are upheld in the future by “packaging investments and certifying them as being done to a certain set of standards,” Raimondo said.

This approach, she added, could unleash vast amounts of private and public capital.

One of the main frameworks for this approach is the Blue Dot Network (BDN), a certification of excellence scheme launched by the US, Japan, and Australia in 2019.

The BND wants to encourage public and private investment by branding and certifying infrastructure projects guided by transparency, accountability, and security. It also wants to boost investor confidence by establishing shared practices.

Furthermore, EU leaders agreed with Biden in June to launch an EU-US Trade and Technology Council (TTC) to streamline cooperation in key trade and technology areas such as artificial intelligence, the regulation of online platforms or data flows. The first meeting of the TTC will take place on 28 and 29 September.

“We are in a much better place to set international standards, if we are combining our efforts and working together,” European Commission Vice-President for Economy, Valdis Dombrovskis, said on Tuesday.