EU Commission Vice-President Andrus Ansip heralded a breakthrough agreement on EU telecoms rules as "essential to meet Europeans' growing connectivity needs and boost Europe's competitiveness". But he lost one battle as negotiators agreed to cap the price of calls and text messages between EU countries to 19 cents per minute and 6 cents per SMS. [European Commission]

The European Parliament scored a victory after months of heated negotiations as the European Commission and national diplomats agreed to limit the price of phone calls between EU countries to 19 cents per minute. Text messages will be capped at 6 cents per SMS for consumers within the bloc.

Negotiations on the landmark telecoms overhaul wrapped up at around 2AM in a European Parliament meeting room on Wednesday morning. The final round of talks started on Tuesday afternoon and lasted around 12 hours.

The deal will come as a relief to Commission officials close to the file because it brings the EU executive closer to its goal of wrapping up talks on all pending technology legislation by the end of 2018.

“We are laying the groundwork for the deployment of 5G across Europe,” Ansip said, referring to fast next generation mobile networks. 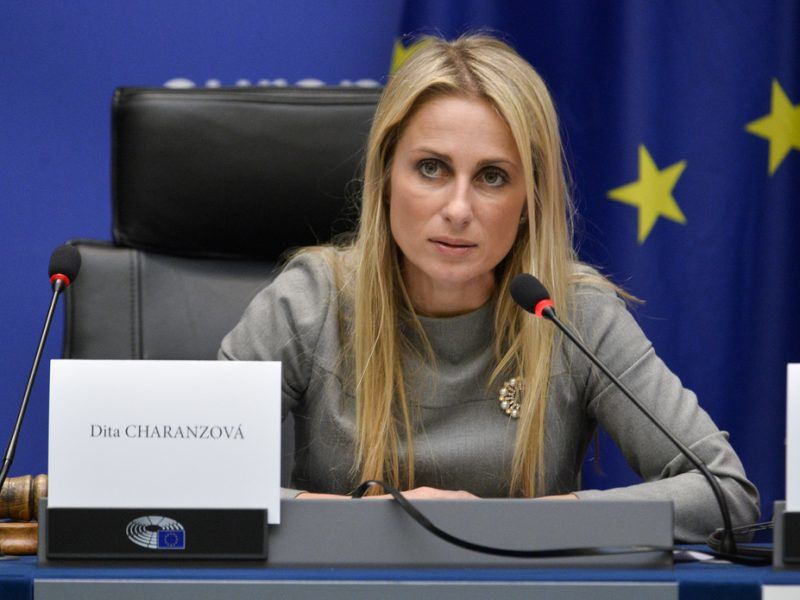 The European Parliament is holding its ground on its controversial proposal to lower the costs of international phone calls within the EU, one week before a make-or-break round of negotiations on a sweeping telecoms bill.

The price cap on so-called intra-EU calls and text messages was not part of the original proposal that the Commission announced in September 2016. Instead, the issue became a contentious negotiating chip later on when MEPs insisted on the change as discussions heated up last year.

Ansip came out as a fierce opponent to regulating the price of those calls and messages, and accused MEPs of trying to take the negotiations “hostage” at the cost of other controversial measures in the bill, like new rules on investment in telecoms networks. Ansip argued that it is useless to regulate the price of traditional telecoms services between EU countries because consumers are increasingly turning to digital apps like WhatsApp to call and message abroad.

The intra-EU calls issue has became known as the “new roaming” after the ban on mobile roaming charges that took effect in the EU last year.

Telecoms companies have argued that both the roaming regulation and the plan to cap international call rates are harsh moves that could slash their revenues.

Dita Charanzova, the Czech Liberal MEP who spearheaded the proposal to introduce the price cap on calls between EU countries, said after the Wednesday morning deal, “Cheaper phone calls are a victory for all EU citizens”.

Charanzova led the Parliament’s campaign to push through the price cap despite opposition from Ansip and national governments.

“We want an EU where country codes are obsolete, where we can call or text anyone in Europe without having to think about how much it is going to cost and I think we have finally achieved this,” she added.

In the weeks leading up to Wednesday’s agreement, it became clear that negotiators would cave to the Parliament’s demand. Lawmakers weighed three different options for the price regulation, including a limit based on domestic call rates in each country.

But the Parliament did not get everything it wanted. The Commission inserted a clause in the final deal that will give national telecoms regulators the ability to exempt companies from applying the price cap if they can prove that it would cripple their business. MEPs did not want such a measure in the rules.

MEPs had pushed for the regulation to limit the price of calls and text messages based on domestic costs, instead of setting a cap of 19 cents per minute and 6 cents per SMS.

Sources close to the file said that Wednesday’s outcome will mean that prices will not change in some countries where the rate of calls between EU countries is already very low.

“It would have been a lot better had it not been for someone like Ansip,” one Parliament source said, referring to the Commission Vice-President’s public comments against the price regulation earlier this year.

“He called anyone who asked for a cap a Communist. It was a bit much,” the source said.

While the controversial price cap on calls and texts between EU countries took centre stage in the final stretch of negotiations, Commission officials have been eager to promote what they view as the real centrepiece of the new rules. The legislation introduces a measure aimed at encouraging telecoms operators to invest more money in building fast internet networks.

Under the new law, telecoms companies can be relieved of some regulation if they agree to invest in a “new very high capacity network” with competing operators. The Commission has heralded the deal as a way to increase the speed and coverage of telecoms networks across the bloc, and to create more competition between carriers.

The strategy is part of the Commission’s plan to force companies to invest more money into speeding up the EU’s ageing telecoms infrastructure. Around €500 billion in investment is needed to meet the bloc’s internet speed targets, according to the EU executive’s estimates.

As part of its original proposal, the Commission set the goal of making sure the entire bloc has fast internet connections of 100 megabits per second by 2025. Schools, hospitals, public authorities and transport hubs should have even faster gigabit-speed connections by that time.

The rules will also encourage telecoms companies to build new infrastructure with technology made out of optical fibre, which makes internet connections faster. That will mark a major shift in some EU countries where companies have hesitated to spend money on updating their networks to include more fibre.

“This regulation will now provide the way for Europe to move into the gigabit society and 5G era. We need big investments in fibre connections in Europe if we want to be successful with new innovations,” said Miapetra Kumpula-Natri, a Finnish Socialist MEP who advocated for the investment rules to encourage competition between operators.

Erzsébet Fitori, director general of the FTTH Council Europe, a group that lobbies for increasing fast fibre-based internet networks, said, “There is a clear shift in regulation towards rewarding new fibre and 5G investments while end-users’ benefits remain ensured by moving to a long-term competitive market structure”.

Some telecoms operators said the rules are too complex and it remains unclear under what circumstances national regulators will be allowed to step away from policing companies that promise to invest in building new networks.

Lise Fuhr, director general of ETNO, an association that represents large firms including Deutsche Telekom and Orange, said the legislation “misses the gigabit targets” because it lacks clear incentives for companies to build fibre networks.