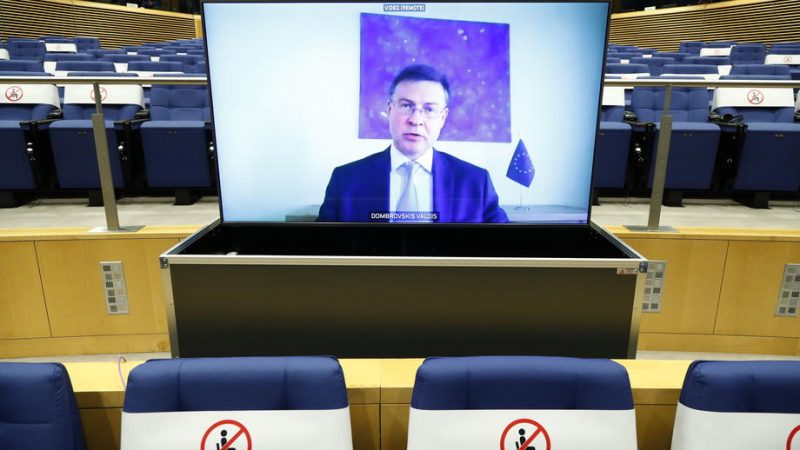 European Commission Vice-President Valdis Dombrovskis is seen on a screen speaking during a video conference on the Capital Markets Union and Digital Finance in Brussels, Belgium, 24 September 2020. [EPA-EFE/FRANCOIS LENOIR]

The European Commission on Thursday (24 September) set out plans to create what its officials described as the world’s most comprehensive set of rules for crypto-assets and their underlying blockchain technology.

EU policymakers have said that Facebook should not be allowed to launch its Libra stablecoin in the bloc until proper rules are in place.

The European Commission will propose new EU rules for crypto-asset issuers and service providers to apply for a “passport” or EU-wide single market access and safeguards for investors.

Safeguards include capital requirements, custody of assets, a mandatory complaint holder procedure available to investors, and rights of the investor against the issuer.

Issuers of significant asset-backed crypto-assets like global stablecoins would be subject to more stringent requirements in terms of capital, investor rights and supervision.

The European Commission wants financial firms and other companies to share more customer data to create a “broader open finance space” with new services for citizens, according to a draft of the Digital Finance Strategy seen by EURACTIV.

The aim is to replace national rules introduced in some EU states and offer a “regulatory stamp” or legitimacy to crypto-asset and blockchain firms to help attract financial innovation and steal a march over other parts of the world.

The EU will also consider updating capital rules for crypto-assets held by financial firms. It will also explore how blockchain could help smaller companies raise funds.

The EU will legislate to clarify how existing financial rules apply to crypto-assets.

It will also introduce a pilot regime for crypto-assets covered by existing rules. Companies would be temporarily exempt from rules to experiment with new products in a controlled environment. Such a “sandbox” system has been used in Britain for several years.