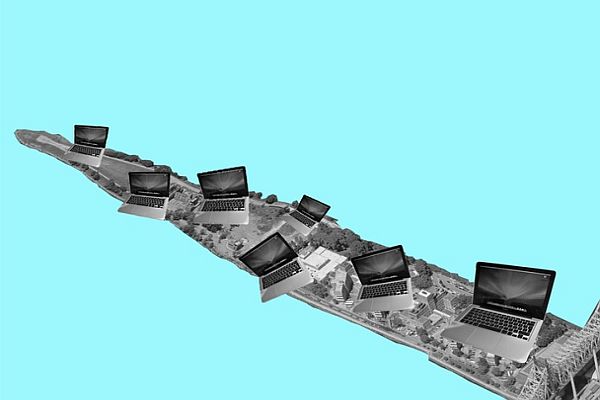 This article is part of our special report The Internet: Europe’s future growth driver?.

SPECIAL REPORT / Europe seeks to capitalise on clusters of internet-driven businesses – such as those in Dublin and Helsinki – whose success relies on a mixture of policy initiatives ranging from education through to taxation, but also word-of-mouth.

One of the key drivers leading companies to gather in Silicon-Valley-style hubs, however, is the simple fact that others have done so.

“When you gather a lot of talented people in one location there is obviously a natural exchange of ideas and cooperation between the companies in that cluster,” said Kenneth Fredriksen, vice president of Huawei’s Central European and Nordic region.

Fredriksen said the Chinese tech giant was lured to invest in a new research and development centre in Finland because of the “structured and unstructured ways that hubs help companies to create and share ideas”.

“By adding more players and expanding the ecosystem it can lead to increased idea sharing between companies and a flexibility that makes the region even more dynamic. The basic idea is that sharing increases the competence of the entire region,” Fredriksen explained.

“It means that when you go down to the pub, or in the locker room after hockey, people say: ‘Why don’t you do this, why aren’t you doing that?’ It means that you’re getting feedback from ‘the other side of the aisle’,” he said.

It is not necessarily by design that such an ecosystem occurs, so much as by chance, Koponen said. Nevertheless there are several ingredients that need to be in place for such a hub to develop, and policy intervention is one factor.

Most commentators agree that the place concerned must have a disposition to the sector involved, for example, whether this is encouraged through education or exists naturally.

“An intuitive user interface is key to delivering a superior end-user experience, and Finnish engineers are well-known for their capabilities to create ingenious and innovative software design,” Fredriksen said.

“We have a lot of good know-how coming through our universities,” added Barry O’Dowd, the senior vice president of emerging businesses with Ireland’s Industrial Development Authority, or IDA. “And we work closely with colleges and universities to ensure they’re up to speed on where tech sectors are moving.”

Market and regulation are drivers

Once talent has been drawn in convincing numbers, however, that can provide a momentum of its own.

The local talent pool in Dublin has been boosted heavily by Google, the US internet search giant, which opened its Irish headquarters in 2002 and has since recruited highly trained employees from around the world.

Whilst clustering may be a market-driven process, “regulatory initiatives at EU level can help to create the right framework in which these technology hubs can thrive,” said Huawei’s Fredriksen.

The regulatory environment begins with models for subsidies and assistance.

“If you want to scale something up and there are ambitious people, they need subsidies,” Koponen said.

He believes that “funding offered with ‘no strings’ is a bad thing,” but added: “If there are funds available for companies, then they should be put to help companies. We could do more with structural finds. These are going to be spent in EU, and the companies involved in the tech sector are not going to leave Europe.”

Indeed the, EU’s upcoming ‘Horizon 2020’ research funding programme – to be agreed as part of the bloc’s 2014-2020 budget – will seek to promote clusters by encouraging project funding to involve large consortiums, including university research departments, small businesses and larger companies, all typically found co-existing in such hubs.

Tax is not the only factor

Although Ireland’s low corporate tax rate – just 12.5% – clearly played a key role in attracting many companies to Ireland, the IDA’s O’Dowd said that the 140 foreign companies which expanded or launched in Ireland last year were equally attracted by other regulatory factors.

Government-backed venture capital fund Enterprise Ireland – the largest in Europe – is one, he said, along with strategically organised local events such as the Dublin Web Summit, which has become a key pull for the tech sector, attracting well known industry figures.

Commentators agree that there are clear benefits to creating such commercial clusters. One advantage is that they appear to spread. Hence Finland’s cluster of technology companies has melded with the success of Scandinavia as a whole, boosting the entire region.

Estonian President Toomas Hendrik Ilves said that “while the Nordic countries were ahead of us in the past, using IT to provide services has allowed Estonia to really develop quickly.”

There is no reason why such a tech hub mentality should not spread more widely, Ilves said.

“If we can achieve a level of integration of our services, both private and governmental, I think the rest of Europe will begin to see the benefits of it, but we need these positive examples,” he added.

The ability of such hotspots to pull in foreign investment cannot be doubted. In so-called “Silicon Docks”, Dublin’s converted port warehouses where Google and Facebook have their European headquarters, other major tech companies such as LinkedIn, PayPal, Amazon, Twitter and Zynga have all piled into the city.

Huawei’s €70-million investment into Helsinki last year builds on an existing technology design centre in Sweden and a centre for user interface research in the UK.

“We see great opportunities in incorporating the strong know-how from the Finnish market into our global R&D, just as we have done in Sweden where we have increased our R&D investments by over 300% in the last five years and now employ around 500 staff,” Fredriksen said.

In the current slump, it is no surprise that policymakers want to highlight the tech sector in concentrated areas, to capitalise on a sector where foreign direct investment remains buoyant.