Europe’s first civil drone law gets a boost in Parliament 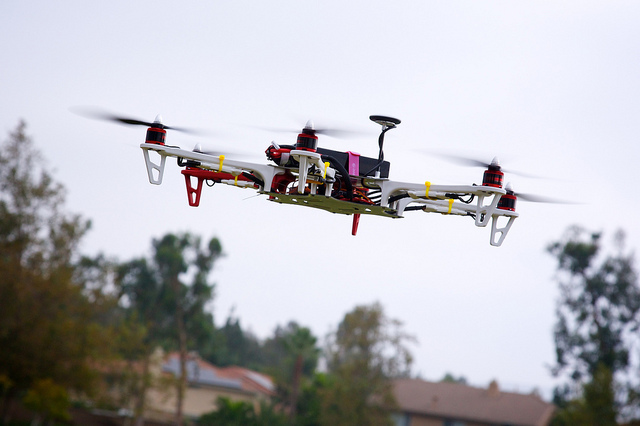 Civil drones are used by European businesses for agriculture, energy and in other industries. [Richard Unten/Flickr]

The EU came closer to getting its own laws on civil drone use this week, after a report outlining legislation plans was introduced in Parliament’s Transport and Tourism Committee.

The European commercial drone industry is growing and there’s a rift over how companies stand to benefit from a new EU law.

Europe has about 2,500 small civil drone operators, more than the rest of the world combined. Over the last few years, businesses have cropped up around the EU that manufacture and use drones in agriculture, energy, monitoring infrastructure, photography and other industries.

Foster’s report acknowledges Europe as “the leader in the civilian sector” for drones, compared to the United States’ dominance in the military sector.

MEPs in the transport committee will vote on Foster’s report in September. If it’s approved there, the report will go on to a plenary vote in October.

Foster said after Wednesday’s (15 July) committee meeting, “Drone technology is developing quickly, so I am keen to ensure the EU takes a flexible and light-touch approach to regulation, taking into account the international dimension.”

The report suggests distinguishing between regulations for commercial and recreational drone use, which manufacturers say will help the market since recreational users violate rules more frequently.

Dutch MEP Matthijs van Miltenburg, shadow rapporteur on the drone regulations for ALDE, said there still needs to be more safeguards for privacy and security. This morning (17 July), he submitted 30 amendments to Foster’s report, including one asking for drone standards based on privacy by design and privacy by default.

Van Miltenburg said public-private funding should go into research to protect drone technology from being hacked and into developing geo-fencing, which sets out virtual territorial limits that outline where drones can fly.

“There’s a lot of research that’s already being undertaken by the aviation industry. Still, both things need to be developed to make sure we can safely fly drones,” he said.

ENISA, the European agency for network and information security, does not work on drone security. A spokesperson told EURACTIV the agency has no plans to pick up the issue.

Van Miltenburg also criticised Foster’s report for focusing on international partnerships through the Joint Authorities for Rulemaking on Unmanned Systems (JARUS), a regulatory body with 38 members worldwide, including several European countries. Instead, he says, an EU law on civil drone use should give the European Aviation Safety Agency (EASA) a larger role.

EASA is drafting guidelines this year for the Commission’s civil drone use proposal.

The EPP shadow rapporteur on the committee report, French MEP Renaud Muselier, also wants to beef up EASA’s work on drones and allow for pilots to operate even when a drone is not within sight. Flying a drone beyond visual line of sight is legal with a special licence in France.

Muselier said Foster’s report is “a good start, but we have room for improvements”.

Marked differences in national civil drone regulations explain why manufacturers’ openness to EU legislation varies, depending on where they’re based.

France has over 1,600 companies operating civil drones, making it one of the largest drone industries in Europe. Morelli says since the association was founded in 2013, its membership has grown rapidly. In 2012, France introduced its law governing civil drone use.

According to Morelli, a cross-border sale involving a French drone manufacturer only happens after weeks of scrutinizing mismatched national rules.

“People who fear the regulation would be too restrictive because they’re happy with their own national regulation are only thinking in the short term. The way you have to think with drones, you need a European regulation,” he said.

Not all European drone manufacturers say their business within Europe would be easier with an EU law on civil drones.

Danish Aviation Systems hasn’t faced difficulties selling drones to other European countries, according to the company’s CEO Steven Friberg. The manufacturer is a six-year-old company specialised in manufacturing drones for agriculture and mining and sells to large companies like Siemens.

Friberg said the company’s experience selling across Europe has to do with Denmark’s lax rules, noting that his company receives less orders from countries that have tough legislation.

Passing an EU law on civil drone use too soon could harm the still young industry, Friberg warned. Denmark’s liberal regulations would also risk being diluted by elements from stricter countries like the Netherlands.

“They shouldn’t do anything to harmonise within the next five to seven years. The technology is there, but it’s not mature. In order for some businesses to invest in this before it gets popular it takes a few years,” Friberg said.

EASA is scheduled to hand over its draft regulation to the Commission by the end of this year, shortly after the Parliament votes on civil drone use.

The European Union does not currently have legislation on civil drone use. The European Commission requested a draft regulation from the European Aviation Safety Agency (EASA) in 2014.